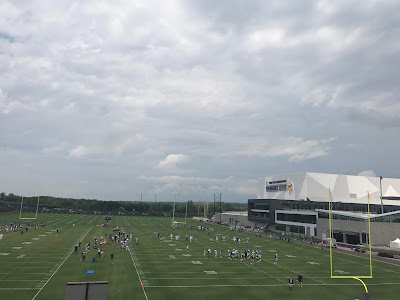 The Vikings continued training camp at TCO Performance Center. Daniel House has all of the key takeaways in his latest notebook!

Preparations are underway for the Vikings’ first preseason game against New Orleans on Friday night. After a quick off day on Sunday, the team returned for a lighter Monday afternoon session. The practice featured a heavy amount of DB/WR work and 7-on-7 action.

During the red zone portion of the 7-on-7 drill, the offense was clicking. Quarterback Kirk Cousins found wide receiver Adam Thielen off an out for a touchdown against Xavier Rhodes. A few snaps later, Cousins connected with Stefon Diggs on a crosser in the back of the end zone. Diggs got a little separation against Rhodes and Cousins fired the ball into the window. To end the drill, Cousins found Olabisi Johnson off a quick curl for a red zone touchdown. In a team drill, Cousins made one of his best throws of camp when he escaped the pocket and threw against his body. He delivered a strike to Adam Thielen, who beautifully executed the corner route.

Mack Alexander looking improved
At this point in camp, the offense and defense are both trading punches. In the team’s traditional 7-on-7 period, cornerback Mack Alexander stood out. Through nine practice sessions, Alexander is clearly a top performer. He was tight in coverage against Stefon Diggs and forced two incompletions, including against a deep fade. Alexander also knocked away a comeback intended for Olabisi Johnson. Mack is playing confidently and has improved his overall technique. He is one of the only cornerbacks who has managed to slow Chad Beebe out of the slot. Beebe’s quickness has been a really tough matchup for members of the Vikings’ secondary. However, Alexander’s quickness, body positioning and recovery speed have allowed him to make plays. If he takes a big step this year, it would provide another legitimate and consistent option in Minnesota’s defense.

In addition to Alexander, Jayron Kearse has been consistently in the right spot. He had a notable pass breakup in the team’s’ situational drill. He popped wide receiver Brandon Zysltra from behind to knock the ball loose. Kearse could be a weapon for the team if they decide to play additional “three-safety” packages this year. You can tell Kearse isn’t thinking quite as much and it’s allowing him to play fast.

In addition to those contributors, Holton Hill flashed in several drills. He turned his hips in front of a Jordan Taylor post and knocked away the pass. Hill also kept up with Chad Beebe’s quick slant and used his recovery speed to jar the ball loose. Hill’s eight-game suspension will certainly complicate his current status on the roster. However, he has been very impressive in many different portions of practice. Monday’s session may have been his best of training camp.

Wide receiver Brandon Zylstra is working his way back after starting camp on the physically unable to perform list. There have been a few moments where he’s shown his potential. In the DB/WR drill, Zylstra flashed his quick feet and kept his shoulders vertical to sell the quick slant. He has been slowly starting to make plays in practice sessions and may gain additional momentum in the coming weeks.

The tight ends continue to flash within the Vikings’ offense. In a 7-on-7 drill, Tyler Conklin made difficult contested grab against Anthony Harris. Conklin was in excellent position and maintained body control. Kirk Cousins threw the pass to his back shoulder and he brought it in. Conklin will be fun to watch in the preseason and could play a large role in the offense, if he continues to prove he is versatile.

One of the top highlights of the day occurred when a Jake Browning pass in the flat sailed high. Rookie tight end Brandon Dillon made an acrobatic one-handed grab near the sideline. The Vikings have a well-rounded tight end group and could attempt to keep one or two players on the practice squad.

Downs makes a splash play
Linebacker Devante Downs brought pressure and knocked a Sean Mannion pass straight into the air. He camped under the ball, hauled in the interception and took it the distance. Downs has been working near the top of the special teams units and continues to see action with the second-team defense. It’s difficult to evaluate linebacker play in camp, so the preseason will be critical. Downs’ range, length and physicality were things that jumped out in his college film. After spending most of last season easing back from knee surgery, Downs could be a quiet contributor for the Vikings in 2019. We will soon see preseason action, which always provides more clarity within this position.

Situational drill gives Bailey live work
At the end of practice, the offense faced a 20-17 deficit with 3:19 remaining. The drive featured several short completions, but stalled. Kicker Dan Bailey knocked down a 35-yard-field goal to tie the “game.” After Stefon Diggs grabbed a slant and came up just a few yards short of a first down, quarterback Kirk Cousins was visibly frustrated.

In the same drill, the second-team offense advanced the ball past the 50-yard-line and Bailey was again called upon to attempt a field goal. This time, he drilled the attempt from 53 yards out. Bailey finished the afternoon 6-for-8 with made tries from 35, 41, 42, 45, 47 and 53 yards. Both of his misses came from the right hash (38 and 52 yards), which has been a theme. This training camp, all but one of Bailey’s misses have occurred when he is lined up on the right hash.

During the special teams sessions, there is a long list of punt returners still taking reps. However, during a drill working exclusively on punt coverage, Chad Beebe and Holton Hill took the reps. It could be a pure coincidence, but this is the first time there has been just a couple players fielding punts.