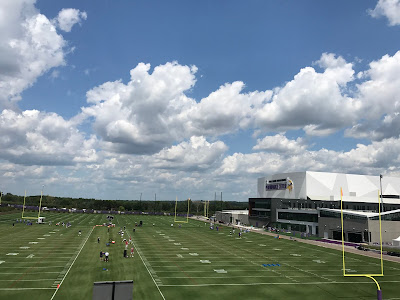 The Vikings are directly in the heart of training camp practices and preseason games start this week. Daniel House has all of the takeaways from the tenth afternoon session at TCO Performance Center!

The Vikings are continuing to get ready for their first preseason game on Friday night in New Orleans. It was one of the first days where the coaches were on the sidelines and offensive coordinator Kevin Stefanski called plays by using the helmet system. During one portion of team drills, the team was pumping in crowd noise to simulate hostile environments. The coaches continue to test players in a variety of different ways as they install new aspects of the system.

Situational period goes to the defense
On Tuesday, the defense won the final situational period of practice. This is the second consecutive day where the unit has prevailed. During Tuesday's session, the offense trailed 16-13 with 1:37 left. The ball was on their own 25-yard-line. Quarterback Kirk Cousins was 2-for-6 for 15 yards during the drill. On fourth down, he tried to find Stefon Diggs up the sideline, but the pass was beautifully knocked away by cornerback Trae Waynes. Cousins had two high throws, but had a clean pocket for all but two of his pass attempts.

Overall, the Vikings' quarterbacks struggled during portions of practice. Jake Browning tried to find Dillon Mitchell near the sideline, but overshot him. Safety Marcus Epps was there for an easy interception. It was a tough day for Browning, who had numerous high throws and missed targets.

A little earlier in practice, Stephen Weatherly created pressure and tipped a Sean Mannion pass at the line of scrimmage. The ball deflected into the hands of linebacker Reshard Cliett. There were several batted passes and passes that went off the hands of receivers. Jordan Taylor had one drop on an out route and couldn’t get position for a deep completion against Mack Alexander.

Quarterback Kirk Cousins also was intercepted when a quick pass went through the hands of wide receiver Brandon Zylstra. It was one of two notable drops by Zylstra during various portions of practice. The pass was tipped to Trae Waynes, who came away with an interception. Outside of that, Cousins' play of the day came when he aired the ball out to Stefon Diggs. Diggs got open off a deep crosser against Xavier Rhodes and Cousins hit him in stride. Diggs sprinted into the end zone and got the crowd fired up.

Hill and James stand out on the depth chart
After a strong Monday afternoon practice, cornerback Holton Hill had two more highlight plays in coverage. The most notable was against a Brandon Zylstra fade. He ran step-for-step with him and rotated his hips to stay tight to Zylstra. Cornerback Craig James also had one of the top plays of the day when he dove for an interception. Quarterback Jake Browning aired it out to wide receiver Jeff Badet up the seam, but James used his speed to run right with him. He turned on the jets when he saw the pass sailing wide and made the diving play. He also had a great rep in a team drill against Dillon Mitchell. James opened his hips and won a physical battle at the top of Mitchell’s deep comeback. He hasn’t flashed much in this camp, but James was a developmental player who intrigued me last season.

Linebackers heavily rotating
There were several linebackers who stood out during Tuesday’s session. The coaches were rotating more players with the second-team unit. In one team drill, Cam Smith and Reshard Cliett worked together out of the nickel package. Smith blitzed downhill and blew up running back Mike Boone in pass protection. The young linebacker continues to work near the top of special teams depth charts and is making plays against the run. Cliett has been flashing in similar drills and blew up a D’Angelo Henderson inside run. Smith and Cliett will be two players to closely monitor during preseason games. The coaches had Cliett and Smith rotating into the second-team group, next to Devante Downs. During portions of practice, the main core of Downs, Kentrell Brothers and Eric Wilson worked together. The final couple spots in this position group are up for grabs and live exhibition games will help separate a few candidates from the pack.

Hunter dominating 1-on-1 drills in camp
The team did a small amount of 1-on-1 OL/DL work on Tuesday. Defensive end Danielle Hunter has been destroying this drill and utilized a filthy inside spin move to beat Rashod Hill. There hasn’t been anyone who can consistently block him in these situations. The only player who has slowed him slightly is starting right tackle Brian O’Neill. O’Neill didn’t practice on Tuesday, so Hunter was winning even more against Rashod Hill. Center Garrett Bradbury had two great reps against Jaleel Johnson and has been standing out when he’s in space.

Hercules Mata’afa used his speed to split reps against Pat Elflein. For the second consecutive day, Mata’afa worked with the second-team. Jalyn Holmes has been receiving the majority of starting three-technique reps alongside defensive tackle Jaleel Johnson. This preseason will give us a chance to see how Mata’afa handles physicality, especially against the run.
No live field goals on Tuesday
There were no live field goal sessions and the special teams units continued to work in small groups. During Tuesday’s session, one of the specific areas of emphasis was punt return contain. They also held a large session focusing on kickoff return. Ameer Abdullah appeared to be taking the starting reps, but a heavy rotation among the punt returners continued.

Injury Report
In addition to players on the physically unable to perform and non-football injury lists, Brian O'Neill wasn't in pads. Defensive end Ade Aruna and offensive tackle Tyler Catalina were not spotted. Aviante Collins wasn't in pads, but watched practice. Tight end Kyle Rudolph returned after not participating in the past three sessions.