Day 1 Training Camp Notebook: A First-Look at the Vikings' Roster 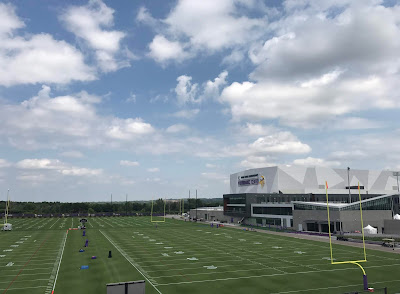 The Vikings kicked off 2019 Training Camp at TCO Performance Center on Friday. Daniel House provides his practice notes from the first afternoon session!

The first couple days of practice will be a chance to start exploring the Vikings' depth chart. Over time, we’ll begin to notice which players have room to rise in the coming weeks. Friday’s session was a light practice with play installation, small team portions and individual/position group work. As camp progresses, the intensity will increase and physical practices can help paint a clearer picture of how roster battles may play out. For now, I’ll be watching the depth chart and installation periods.

Third wide receiver battle
The third wide receiver competition is going to be one of the top battles of training camp. During the first practice session, Chad Beebe and free-agent signing Jordan Taylor were rotating into three-wide receiver sets. Beebe is a tough matchup out of the slot because of his quick feet and sudden agility. In DB/WR drills, he ran a great hitch against Craig James and had more than three yards of separation out of the break. Later in practice, he ran a crossing route over the middle and made a diving grab in defensive back Derron Smith’s zone. Jordan Taylor didn’t have many passes thrown his way, but was on the field with the first-team for a high volume of snaps. It will be worth watching this battle unfold, especially when more physical coverage is occurring. Beebe and Taylor both took reps on punt return and could provide value in this area. With the current landscape of the roster, each of them have a chance to make the team. However, it could get crowded if the team keeps former first-round pick Laquon Treadwell. Treadwell didn’t see first-team reps during any portion of the practice session.

Running back job and depth chart
It’s also worth keeping an eye on the third running back job. During Friday’s practice, Ameer Abdullah primarily worked with the second-team. Mike Boone and Alexander Mattison were blending in with the third-team units. The winner of the job could be determined by kickoff return abilities. Abdullah has vast experience returning kicks, which will be beneficial. Boone returned kicks in college and will need to show these skills during training camp and the preseason.

The Vikings have always taken things slow when it comes to placing rookies on the depth chart. For example, Abdullah received second-team reps over Alexander Mattison. Danny Isidora was also at right guard instead of fourth-round draft pick Dru Samia.

This trend carried over to the defense. AAF signee Derron Smith was working with the second-team at safety, which meant Marcus Epps saw time with the third-string unit. Epps, a versatile defensive back, had one pass breakup in the wide receiver/defensive back drills. Overall, it’s very early in camp, so the current depth chart is likely going to favor veterans for the first couple days.

Offensive Line favors veterans
The offensive line depth chart didn’t have any surprises among the first-team unit (Reiff-Elflein-Bradbury-Kline-O’Neill). The second-team offensive line is where things looked a little different. Dakota Dozier slotted in at left guard, while Danny Isidora earned reps at right guard. This meant Dru Samia (right guard) and Cornelius Edison (center) were with the third team unit. For the most part, this was expected, but many thought Samia would earn second-team snaps. The coaches also appear to be heavily evaluating Dakota Dozier, who worked within offensive line coach/run game coordinator Rick Dennison’s system in New York. It’s impossible to learn much regarding trench performance until physical padded practices occur. For now, we can monitor how the depth chart changes in the coming days.

Plays of the Day:
There were only two big highlight plays during the practice session. Jayron Kearse made a leaping interception near the sideline. Quarterback Sean Mannion attempted to drive a pass to the sideline and Kearse read his eyes the entire way.

The second play was a beautiful fade by Kirk Cousins up the sideline to Stefon Diggs. He placed the pass nicely and Diggs made a tough grab against cornerback Xavier Rhodes’ tight coverage. It was one of the only deep shots the offense took, especially considering the first day centered around the running game and installation. One can expect to see the offense start to evolve and expand next week when the pads are strapped on.

Eyes on the Interior
Defensively, the team had a different rotation within the interior. Linval Joseph didn’t participate much in the spring and only did light work on Friday. This isn’t abnormal for Joseph, who never really gets many training camp snaps. Earlier in the day, Minnesota placed Shamar Stephen on the Non-Football Injury list and Mike Zimmer indicated he shouldn’t miss much time. For right now, Jalyn Holmes was lined up at three-technique, while Jaleel Johnson handled nose tackle duties. Among the second-team units, Hercules Mata’afa played three-technique and Armon Watts lined up at nose.

At the linebacker position, Eric Wilson, Kentrell Brothers and Devante Downs were in the second-team unit. Draft pick Cameron Smith worked with the third unit, but was on first-team punt coverage. Seventh round selection Kris Boyd was a starting cornerback with the second-team unit and moved up the depth chart after Holton Hill’s suspension. The Vikings continued to work out defensive backs on Friday. After hosting Orlando Scandrick and Dexter McDonald on Thursday, former Cowboys and Jets cornerback Mo Claiborne was in town for a visit, according to Tom Pelissero. It’s clear the team wants to evaluate veteran cornerbacks in case they are needed.

Special teams takes center stage
Early in practice, there was a heavy emphasis upon special teams group work. The coaches also had another portion of practice dedicated to fundamentals. There was guided gunner drills, splits work and technique coaching occurring. They had several kicking periods and situations throughout, too.

Kicker Dan Bailey went 4-for-7 and missed all threes of his tries from the right hash. Bailey’s stat line: 39 yards (miss), 43 yards, 47 yards, 49 yards (miss), 34 yards, 36 yards, 41 yards (miss). The wind was blowing from left-to-right across the field at 11 miles per hour with gusts reaching 15-17 miles per hour. This could have impacted the kicks, but managing conditions is a key part of successfully executing in poor weather situations.

There was a small portion of practice dedicated to kickoff return work. They ran just a few reps before ending practice. Ameer Abdullah, Mike Boone and Dillon Mitchell appeared to be the first three candidates. These type of special teams battles will likely have a huge impact on the construction of Minnesota’s 53-man roster.

Also, here’s a look at the punt coverage depth chart from practice: