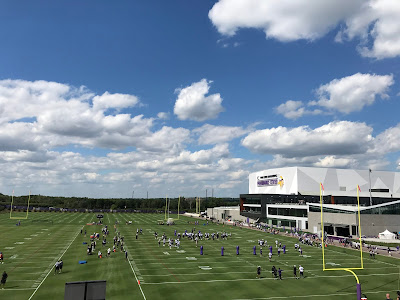 The Vikings are currently in the preliminary installation stage of training camp. Daniel House provided a few limited takeaways from Saturday's practice session.


It was another light day of practice at Vikings training camp. The early portion of camp is always dedicated to installation, individual work and position drills. A large chunk of Saturday's practice involved running game work, walkthroughs and 7-on-7 drills. There were only a few moments where the team pushed the ball up the field in team sessions.

For the second consecutive practice, the depth chart remained similar. One slight difference was in the running back room. Ameer Abdullah saw most of the second-team reps on Friday, but just one day later, rookie Alexander Mattison was blending into the unit. We’ll likely start to see additional moves like this in the coming days. Usually, the most substantial depth chart changes occur following off-days. Wednesday is likely the first time where we can expect to see a few tweaks among position groups.

During 7-on-7 drills, quarterback Jake Browning made several quality throws. In college, his strength was always in the intermediate game. That’s where he flashed the most on Saturday. Browning drove a pass to the sideline for wide receiver Laquon Treadwell, who found a soft spot in the zone. He had to deliver the pass with timing and zip to take advantage of the separation. Browning had success in those drills, but is still growing in team settings. He appeared to make the wrong read and overshot an open Alexander Hollins in a team drill. The main area to monitor with Browning is his ability to drive the ball downfield. He had only one opportunity to do so in any drills. He escaped the pocket, was facing pressure and had to throw the pass off his back-foot. Browning managed to get the ball within range, but the pass hovered and went off the helmet of defensive back Isaiah Wharton. Wide receiver Olabisi Johnson couldn’t get in position to win the contested catch battle. It was a tough way to evaluate Browning’s deep-ball skills and mechanics, especially considering the pressure he was facing. Overall, he has shown flashes, but it’s hard to evaluate much in these type of settings. The most important sessions will be team drills and situational work during physical portions of camp.

Quarterback Sean Mannion was part of the day's biggest splash play. He went deep to wide receiver Adam Thielen, who had a step on cornerback Craig James up the seam. Mannion wasn’t tested much, but it’s clear there’s still installation and learning occurring. The backup quarterback job will be very intriguing to monitor over the next couple weeks.

Wide receiver Chad Beebe primarily worked with first-team units when the Vikings switched to 11 personnel sets. He had a great one-handed grab in the WR/DB drills, but didn’t create any other notable plays. Wide receiver Jordan Taylor occasionally rotated in, but had one drop in 7-on-7 drills.

The addition of tight end Irv Smith Jr. in the draft could be a major key this season. He can be flexed all over the field and move from in-line, to the backfield and out-wide. Many people are concerned about the wide receiver depth chart, but the Vikings will likely have two tight ends on the field quite frequently this season. Smith Jr. is a very tough cover for safeties and linebackers. One notices how quick he is out of breaks when getting to the top of his route. He manages to create separation, which could be very important when the Vikings deploy 12 personnel sets. They can create many favorable matchups for their rookie tight end due to the team’s current group of skill players.

One other noticeable observation was the physical growth of tight end Tyler Conklin. Conklin looks like he has added physical strength and it could help his overall versatility in the offense. Run blocking will be very important in the new scheme and Conklin may be able to contribute in this area now. Not only that, but the Vikings could use fullback C.J. Ham from the backfield and motion him outside to take advantage of his versatility. It can also help the coaches vary personnel groupings to prevent predictability.

Defensively, it’s hard to take away much from these practices, especially when there’s so much fundamental coaching and installation taking place. However, in team settings, Jaleel Johnson stretched across the formation twice for disruptive plays in the backfield. If he can take the next step, it would be a huge lift to the interior defensive line. We’ve noticed progress every year, specifically from a technical standpoint. Due to the current landscape of the depth chart, Johnson has been playing nose tackle. He even remained at the position after Jalyn Holmes walked to the sidelines limping.

The coaching staff inserted Hercules Mata’afa next to Johnson at three-technique. During practice, Mata’afa executed a nice spin move to create pressure. It’s hard to learn much from these practices because pads aren’t being used. Nonetheless, Mata’afa definitely has flashed his quick first step and athleticism.

In the secondary, cornerback Xavier Rhodes had several pass breakups, including a nice deflection on an out-breaking route. Outside of Rhodes, cornerback Kris Boyd displayed excellent technique to keep wide receiver Alexander Hollins tight to his hip. Hollins ran a fade up the sideline, Boyd swiveled his hips to the boundary and got his head around quickly to cause an incompletion. Boyd has continued to work with the second-team unit as Minnesota deals with limited cornerback depth. Despite his suspension, cornerback Holton Hill can still practice, but he hasn’t been taking reps in team drills.

The special teams groups continued to focus on the technical components of both kick/punt coverage and return units. They spent plenty of time in small groups working on kickoff contain and punt downing. There weren’t any live kicking portions of practice, but the specialists were working on a separate field. The main focus was on operational components of field goal kicking, which special teams coordinator Marwan Maalouf indicated may have played a role in Dan Bailey’s three misses on Friday.

When they did do a slight variation of first-team punt return, it appeared Chad Beebe was set to take the rep.

Injury Report
The non-participant list was the same on Saturday. Wide receiver Jeff Badet remained sidelined, along with all five players on the physically unable to perform and non-football injury lists.

Next Up:
Rain is in the forecast for Sunday, but the Vikings are still scheduled to practice at 2 p.m.


For more information, including tweets, follow @VikingsCorner and @DanielHouseNFL!
Posted by Daniel House at 7:37 PM