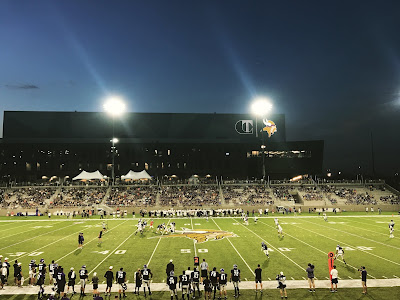 The Vikings practiced under the lights at TCO Stadium on Saturday. Daniel House has all of the key takeaways in his training camp notebook!

On Saturday, the intensity increased to another level as Vikings players were evaluated in live action and situational drills. During the night practice, there were several staged periods, including a large amount of red zone work. This gave everyone a chance to closely monitor players throughout the depth chart.

Defense has a strong night, offensive line performs in 1-on-1 drills
One of the big highlights of the evening came when quarterback Kirk Cousins connected deep with Adam Thielen up the right sideline. Cousins rolled out of the pocket off play-action and tossed the pass to Thielen, who made a difficult one-handed grabbed against cornerback Trae Waynes. A few moments later, Cousins connected with Stefon Diggs, who got separation off a corner route. The pass was slightly underthrown, but Diggs got position and high-pointed the pass. Cousins and the offense had many different looks thrown at them by the Vikings’ defense. Minnesota’s defensive line was getting pressure consistently throughout the night. Hercules Mata’afa and Everson Griffen had several potential sack opportunities and a blitzing Anthony Barr beat left guard Pat Elflein. It’s worth noting how well the starting offensive linemen performed in 1-on-1 drills. Josh Kline won each of his reps against Mata’afa and Garrett Bradbury stone-walled Jaleel Johnson twice. Among the reserves, Brett Jones continues to stand out in 1-on-1 settings. He added another two dominant reps against Tito Odenigbo during Saturday’s practice.

In team drills, there were also a few dominant reps by defensive end Danielle Hunter, who had one notable speed rush against right tackle Brian O’Neill. Stephen Weatherly rotated into the first-team unit and kicked inside to create a run stop. He used his hands to shed center Garrett Bradbury and picked up a tackle for loss. Weatherly also utilized a speed rush to beat Rashod Hill during a team drill. With the depth Minnesota has on the defensive line, they will have plenty of flexibility to rotate and keep rushers fresh.

Quarterback Kirk Cousins also tossed his first interception of training camp. The linebackers dropped into their zones and Cousins tried to fire a dig route to wide receiver Adam Thielen. Linebacker Eric Wilson stepped in front of the throw and hauled in the interception. Mike Zimmer was mixing up pressure packages/coverages and tossing in a variety of different looks to test the offense. There were moments where things broke down and options were limited downfield. With a new system being installed, Saturday night was a chance to see some of the offensive weaknesses. When the unit was clicking, they were using play-action and getting in an intermediate rhythm. It’s so hard to take away much from these type of practice sessions, especially from a team standpoint. However, the Vikings’ defense provided a nice mid-training camp test for the entire offense.

Mannion looks comfortable, Browning adds a red zone TD
Quarterback Sean Mannion has been a quiet surprise during training camp. He looks very comfortable in the system and has been making throws at all three levels. Mannion has adequate arm strength and can deliver throws with touch and placement downfield. During a team drill, he beautifully connected with wide receiver Austin Hollins, who got separation off a double-move. Mannion hit Hollins in stride and continued to show off his deep ball arm strength and accuracy.

On Saturday night, he was also very efficient and comfortable in the red zone. Mannion delivered a strike to wide receiver Brandon Zylstra who sold the outside release and snapped off a post for a red zone touchdown. Zylstra kept his shoulders vertical and used a head-fake at the top of his route to get separation against cornerback Kris Boyd. Another notable play occurred when Mannion rolled out, stood tall against pressure and delivered a great touch pass to Mike Boone in the flat. Boone slid past linebacker Ben Gedeon and sprinted into the end zone for a red zone touchdown. Mannion clearly has a comfort level with the system and is processing through his reads swiftly to get the ball out quick.

Quarterback Jake Browning had one highlight play in the red zone session. He stepped out of the pocket and delivered a perfect touch pass to the corner of the end zone. The placement, touch, anticipation and accuracy allowed him to connect with wide receiver Olabisi Johnson for a touchdown. He also had a great play-fake off a designed boot that led to a big gain on the ground.

During a team period, wide receiver Jeff Badet had a highlight reel grab. The ball deflected off cornerbacks Nate Meadors and Bene’ Benwikere. It was tipped back-and-forth at least three times and Badet managed to make a diving catch.

Wide receiver Dillon Mitchell ran a smooth double-move for a deep completion from Kyle Sloter. However, he dropped a pass during a drill. Dating back to his Oregon days, concentration drops have been a big issue for Mitchell. He has the ability to make explosive plays, but his hands are inconsistent.

Smith Jr.’s versatility is intriguing
Tight end Irv Smith Jr. is going to be an intriguing player to watch this season. He can line up out-wide, in the slot, in-line or at the h-back position to create offensive deception. The coaches can motion Smith Jr. at the last minute and attempt to create a mismatch. With this type of versatility, the Vikings can use 12 personnel and make certain conceptual wrinkles look similar. When watching Smith Jr., one of my main observations is how quick and explosive he is out of breaks. He so smooth and can be a weapon when he gets a matchup against a safety of linebacker. Within the tight end room, I noted a positive pass protection rep by Tyler Conklin against Everson Griffen. If Conklin can take the next step in pass protection and run blocking, he could play a big role in the offense.

Mack continues to make plays
Cornerback Mack Alexander continued his strong camp with a pass breakup in team drills against Stefon Diggs. A little later in practice, Cousins beautifully placed a fade up the left sideline to Diggs, but cornerback Xavier Rhodes was in perfect position to create a pass breakup. There was a constant back-and-forth battle between the top wide receivers and cornerbacks during Saturday’s session.

Odenigbo is night practice MVP
Defensive end Ifeadi Odenigbo might have earned practice MVP honors. Odenigbo won all four of his 1-on-1 reps against Storm Norton, John Keenoy and Dru Samia. He also had two sacks and a pressure during team sessions. Odenigbo has been a strong performer in camp and has been succeeding against first-team competition occasionally. He has developed more diverse pass rushing moves and now has more counters within his skill set. After watching him in camp, it’s clear Obenigbo is making a strong case to see rotational snaps this season. Outside of common names at the position, I remain impressed with defensive end Karter Schult. He used a swim move to blow past Tyler Catalina in 1-on-1 drills and created another pressure in a team session. Schult has been flashing in several portions of training camp and has received a few rotational reps with the second-team unit.

Bailey sees plenty of live action
Kicker Dan Bailey went 7-for-8 during the live periods of the practice. With Kevin McDermott snapping, Bailey made attempts from 33, 39 (low snap), 45 and 33 yards. During the sessions with Austin Cutting at long-snapper, Bailey made tries from 36, 53, and 33. His lone miss (44 yards- right hash) of the night came with Cutting handling the snapping duties. Bailey also came out to practice early and kicked about 20 field goals with the other specialists and Marwan Maalouf.

It appeared special teams depth charts remained the same during Saturday’s practice. We saw punt gunners work for the second consecutive day. Jayron Kearse and Ameer Abdullah continued to receive first-team reps. During drills, there has been a heavy rotation at this position, but Abdullah and Kearse have been the main starters.

Matt Wile continues to punt the ball really well. He had several deep, end-over-end punts with extensive hang-time. This is the second consecutive day where I’ve noted excellent reps by Wile in team periods.

Injury Report
Excluding those who remain on PUP and NFI, five players weren’t in pads for the night practice. Kyle Rudolph, Jalyn Holmes, Dalvin Cook, Ade Aruna and Aviante Collins all did not practice. One can expect Rudolph and Cook received veteran rest days.