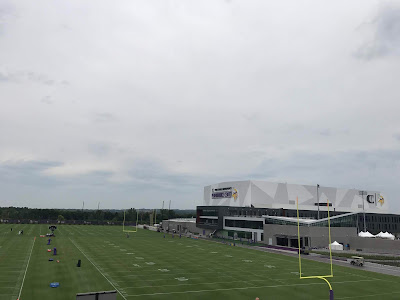 The pads started to pop during the Vikings' third practice of training camp. Daniel House has a few key takeaways in his latest notebook!

After spending the first two days in shorts, the Vikings finally put on pads for Sunday’s afternoon session. It was the first chance to see some physicality in the trenches. The practice featured several team drills and running periods, which slightly increased the intensity. During the final portion of practice, 1-on-1 OL/DL drills tested the offensive line in pass protection. The next couple of days will provide additional evaluation opportunities for many key position groups.

The WR Depth Chart
The first major portion of practice was dedicated to 1-on-1 WR/DB work. As always, Adam Thielen dominated this drill, including a beautiful comeback against cornerback Nate Meadors. Wide receiver Chad Beebe also ran a smooth corner route against Mack Alexander. Later in practice, Beebe had one drop behind the line of scrimmage and fell down three times when trying to gain traction in wet conditions.

Jordan Taylor struggled to get separation in the drill and was dancing at the top of his route. It resulted in Taylor being out-muscled at the stem by Holton Hill. One noticeable weakness from Taylor has been his inability to handle physicality at the top of routes. Early in camp, the wide receiver depth chart behind Thielen and Diggs hasn’t been very impressive. There were a few moments where it looked like a receiver ran the wrong route or didn’t get to the right depth for a concept. In the DB/WR work, I noted two positive routes from Davion Davis, who displayed excellent footwork on a quick slant against Mack Alexander.

Hikutini has a nice day
At the tight end position, Cole Hikutini had a fantastic day. In a team drill, Hikutini made a diving grab in the flat against linebacker Devante Downs. He also grabbed a tough contested pass between two defenders. After seeing his success, I specifically zoned in on his run blocking skills for a few reps. He was placed in-line twice and had two positive run blocking reps. Hikutini ran effective routes and made plays on the ball within traffic. Tight end Tyler Conklin was less strong against the run and had several reps where he was beaten off the edge. In those instances, Anthony Harris and Jayron Kearse managed to shed blocks and get into the backfield for potential stops. The ability to run block is going to be a key aspect of the tight end battle. This is especially the case in a system asking for versatility. There’s no doubt the Vikings are going to be using the tight ends in many creative ways, so executing in all areas will be critical.

Mattison makes a big play
It’s very difficult to evaluate running backs in training camp, but Alexander Mattison found a cutback lane and burst free for a long run. He planted, exploded off his backfoot and took advantage of the crease. Cook had a similar one-cut run as he burst into the second level of the first-team defense. Again, it’s hard to learn much without contact, but both running backs found the right lanes and avoided defenders.

Battles start in the trenches
Some of the biggest takeaways from Sunday’s session occurred at the line of scrimmage. During 1-on-1 drills, defensive tackle Armon Watts flourished. He used a pretty swim move against Dakota Dozier to win a rep. A little later in practice, he managed to shed a block and create a run stop in the backfield. Watts was disruptive and is a player to keep monitoring throughout camp. Josh Kline also performed well in the drill and had an excellent rep against Hercules Mata’afa. He got inside hand position, set an anchor and executed the rep. Mata’afa won the second rep with quickness and backed Kline up into the heels of the quarterback. Kline stood out in the team sessions and opened a cutback lane for Dalvin Cook to burst free. He also blazed a trail for Cook in the goal-line situational drill. Between key blocks from Kline and Garrett Bradbury, Cook had a clear path to the end zone. Bradbury also looked impressive in team settings and beautifully reach blocked Jaleel Johnson during a running play. In the 1-on-1 drill, he had a fantastic rep against Jaleel Johnson and flashed his technical skills. Bradbury’s hand technique, footwork and quickness are three traits that stand out.

During the team drills, Danny Isidora did an excellent job of scraping into the second level and finding linebackers. He also had an impressive rep against Jaleel Johnson in 1-on-1 drills. Over the past two seasons, Isidora hasn’t moved up the depth chart, but is currently working at right guard with the second-team. Left guard Dakota Dozier is another player who had one or two notable reps, including a second level block for an Alexander Mattison run. He split 1-on-1 reps and has caught my eye early in training camp.

Left guard Pat Elflein was out in space quite frequently and you could see the potential benefit of moving him within the scheme.

Defensive lineman Ifeadi Odenigbo had a notable run stop on a Mike Boone outside run and split 1-on-1 reps against guard Dru Samia. Outside of key names like Danielle Hunter and Everson Griffen, Odenigbo and Watts stood out the most.

Bailey makes his kicks, Vikings experiment with holders
The special teams depth chart remained the same, including the large group of players returning punts. After not doing any live kicking on Saturday, the Vikings had two different field goal sessions. Dan Bailey went 5-for-6, including makes from 34, 37, 40, 44 and 44 yards out.

His lone miss came from the middle hash (34 yards) while Adam Thielen was holding the try. It’s clear the coaches want to evaluate different holders during camp. Thielen spent time with the specialists for a few minutes of practice. Before practice, all of the quarterbacks also worked on holding technique with special teams coordinator Marwan Maalouf. None of them took live reps, but the coaches were clearly experimenting. Mike Zimmer was around the specialists frequently and monitored new players who were attempting to hold the ball. On Sunday, Bailey had success kicking the ball when punter Matt Wile was holding.