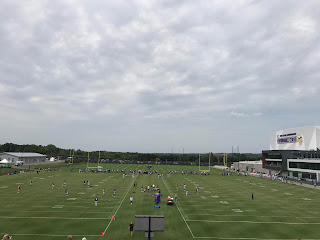 The Vikings continued training camp practices on Friday with a lighter afternoon session. Veterans Riley Reiff, Harrison Smith, Kyle Rudolph, Xavier Rhodes, Everson Griffen and Josh Kline were on the field for stretching, but did not fully participate. It is likely this was a scheduled day of rest for experienced players. The practice featured a few passing and team drills, but was scaled back as the team prepares for a night practice under the lights at TCO Stadium on Saturday.

Zimmer coaching up Boyd, Epps makes some plays
There was a major emphasis upon technique during Friday’s practice, especially in the secondary. Every year in camp, Mike Zimmer always spends extensive time with a young defensive badck. In 2019, Zimmer is coaching up seventh-round draft pick Kris Boyd. In positional drills, he was working extensively with Boyd on his footwork and hip turn. Boyd has flashed during portions of camp, but was called for holding on a deep pass intended Jordan Taylor. He also was beaten by Stefon Diggs over the top. It’s clear he’s still learning all of the technique and footwork. However, with the flashes he is showing, you can definitely see all of his potential showing up.

Outside of Boyd, safety Marcus Epps performed well. During a team drill, he knocked away an errant Jake Browning pass in the backend. Moments later, he picked up a tackle for loss when flexed into the box. Epps read the play and came off the edge for a run stop. If the Vikings keep four safeties, it will be because of Epps’ position flexibility, upside and special teams skills.

Third running back race
The race for the Vikings’ third running back job is going to be a fun battle to watch. Early in camp, Ameer Abdullah has been separating himself from other contenders. During a team period, Abdullah’s blitz pickup allowed Kirk Cousins to step up in the pocket and find Stefon Diggs deep up the sideline. Abdullah also had one great cut-back in space and flashed his hands out of the backfield via a swing pass. In addition, he appears to be working as the primary kick returner. Abdullah also joined Jayron Kearse when the first-team punt coverage unit added punt gunners. At the end of the day, it’s early in the battle and preseason games will be very important for both Abdullah and Mike Boone.

Browning show off upside
At the quarterback position, Jake Browning continues to flash. He beautifully placed a throw up the seam to Cole Hikutini, who had a step on linebacker Reshard Cliett. Browning had good zip and touch on the throw to fit it into the window. When watching Browning, you notice his limitations when throwing downfield, but he has been consistently positive in the intermediate game. He still has moments where he makes the incorrect read or holds onto the ball too long. However, there’s upside within his skill set.

Quarterback Kyle Sloter was picked off by linebacker Kentrell Brothers in a DB/WR red zone drill. He also took a sack and bobbled a snap during team drills. Throughout camp, Sloter hasn’t been earning many reps and isn’t flashing when presented with those opportunities.

Kirk Cousins had several great deep throws downfield, including a pass with great touch and placement to Stefon Diggs. In the team drill, he hit Diggs in stride off a fade up the left sideline.

Defense wins situational drill
A situational drill started on the team’s own 28-yard-line and the offense trailed 24-23. Defensive end Danielle had two excellent reps against Rashod Hill to single-handedly disrupt the drive. The situation ended with quarterback Kirk Cousins visibly frustrated over the outcome. After recently being called out by head coach Mike Zimmer, the defense stepped up and made plays. More passes were contested and the defensive line was getting to the quarterback. In one portion of team drills, defensive tackle Hercules Mata’afa beat guard Dakota Dozier and picked up a pressure. He used his quickness and ripped to get in the backfield. There are reps where Mata’afa shows his potential, but he is still developing consistency. Jalyn Holmes worked with the starters at three-technique alongside Jaleel Johnson. However, the team has been rotating Holmes and Mata’afa every other day.

With Everson Griffen resting, defensive end Ifeadi Odenigbo was getting first-team reps. Odenigbo took advantage and had two great plays against the run. He also added a quarterback pressure against Brian O’Neill. Odenigbo is having a really nice camp and could be a key rotational player for the Vikings this season. I’ve been continually talking about Odenigbo, but Jaleel Johnson has continued the same type of success. He shed a block to blow up an Alexander Mattison screen and had a notable run stop. We knew how much depth was featured in the back half of the Vikings’ defensive line room, but it’s been even more apparent in camp.

Offensive line shuffles as veterans sit out
With Riley Reiff resting, Rashod Hill saw action at left tackle and Dakota Dozier slotted in at right guard. During a few portions of practice, Storm Norton rotated in at left tackle and Danny Isidora played right guard with the first-team. There was one notable play I wrote down where I saw center Garrett Bradbury beautifully diagnose a blitz and pick it up. Not only that, but he and Elflein had a great combination block in team drills to open a rushing lane. It was a less physical day in the trenches, but there were a few moments where the pads were popping.

Center Cornelius Edison got into the second level to open a rushing lane for a Mike Boone inside run. After spending most of camp with the first-team last year, Edison has been primarily working with the third-team at center.

Wile works on coffin corner punts
Matt Wile had three punts inside the 15-yard-line during live punting work. He also continued to hold field goals for kicker Dan Bailey. Bailey went 5-for-7 in field goal periods on Friday. He made attempts from 39, 41, 38, 42 and 44 yards. One of his misses came from 50 yards out, but the snap from Austin Cutting was high. The other miss was a 39-yarder (right hash) with Kevin McDermott snapping. Cutting handled the first five live field goals snaps, while McDermott took the final two attempts. It’s worth noting Dan Bailey is now 20-for-27 in camp and all but one of those misses have come from the right-hash.


Outside of the resting veterans, defensive tackle Curtis Cothran and defensive end Ade Aruna were held out of practice. Defensive end Shamar Stephen was activated off the NFI list and was a limited participant. Tight end David Morgan and cornerback Mike Hughes remain on the physically unable to perform list.

For more information, including tweets, follow @VikingsCorner and @DanielHouseNFL!
Posted by Daniel House at 5:24 PM