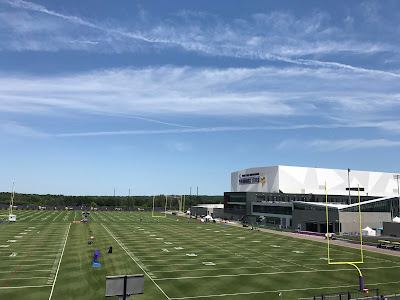 After an off day on Tuesday, the Vikings returned to the practice field for their fifth afternoon session of training camp. Daniel House has all of the key takeaways in his latest notebook!


After an off day on Tuesday, the Vikings returned to the practice field for their fifth afternoon session of training camp. It was the first practice featuring heavy situational and team drills. The coaches placed a heavy emphasis upon red zone work and even had a WR/DB drill in this portion of the field. Wednesday was the first afternoon where the team did not have a 1-on-1 OL/DL session. For the first time in training camp, there were quite a few passing drills to evaluate wide receiver and defensive back play.

The WR/DB battles in the red zone
During the DB/WR work in the red zone, wide receiver Stefon Diggs had a great toe-tapping grab in the back of the end zone against Xavier Rhodes. A few moments later, Chad Beebe’s out was knocked away by cornerback Mack Alexander. Alexander has looked more comfortable and confident this year. He isn’t pressing and has been in the correct position to make plays in numerous drills. This is a big season for Alexander, who is playing to earn a contract extension.

Another defensive back that is playing well in camp is safety Jayron Kearse. It’s clear Kearse made some significant strides this offseason from a technical standpoint. The game doesn’t look too fast for him and he’s playing confidently. In the DB/WR drill, he out-muscled wide receiver Jordan Taylor at the top of his route and knocked away the pass. Taylor consistently struggles to get separation against physical defensive backs and is easily redirected off his route. He also has a tendency to be too patient when setting up his routes.

Cornerback Holton Hill also had two notable pass breakups, including one in a red zone drill. He continues to be low on the depth chart due to his upcoming eight-game suspension.

The Vikings are searching for young options to emerge at wide receiver. Olabisi Johnson had a strong day and flourished in the red zone drills. He had a great contested grab on cornerback Craig James in 1-on-1 drills and ran two other notable routes in team periods.  Johnson has also been getting plenty of reps on special teams and worked as a gunner in the special teams periods. If he can continue to maintain consistency, Johnson could claim one of the final wide receiver spots. Nobody is really jumping off the charts in the back half of the wide receiver depth chart, but Johnson is at least the first player to begin emerging.

Three big plays by the offense
In the red zone period, there were three big plays by the offense. Quarterback Kirk Cousins beautifully placed a fade in the back corner of the end zone to Tyler Conklin, who had a mismatch on linebacker Ben Gedeon. The ability to flex these type of players out-wide will provide ample opportunities for the Vikings to be creative offensively. Earlier in the session, Cousins found Stegon Diggs off a corner route between cornerback Xavier Rhodes and safety Harrison Smith. The last big red zone play was a touchdown grab in the back of the end zone by tight end Kyle Rudolph against cornerback Trae Waynes.

The offense flashed throughout those sessions and capped the day with a successful situational drill. The ball was placed at the 35-yard-line with 1:02 remaining on the clock. Quarterback Kirk Cousins found Chad Beebe on a crosser against linebacker Eric Kendricks. Beebe ducked out of bounds, and on the next play, Cousins found Kyle Rudolph for a corner route touchdown on safety Harrison Smith. It was the right man-to-man matchup and Cousins took advantage. With all of chess pieces on the Vikings’ offense, there is sure to be some creativity and different groupings when the team reaches the red zone. The offense looked pretty efficient and confident inside the 20-yard-line on Wednesday.

Henderson has some burst
Recent signee De’Angelo Henderson caught my eye during the running periods and team sessions. He bounced a couple runs outside and showed off his vision/patience to wait for cut-back lanes. Henderson has some speed and home-run hitting ability in his game. He spent time in Gary Kubiak’s system in Denver and worked with running game coordinator Rick Dennison in New York last year.

Offensive line in the second level
On the offensive line, the left side of the first-team unit was creating lanes. There was one running play where Pat Elflein pushed into the second level, Riley Reiff down blocked hard and Kyle Rudolph sealed Everson Griffen on the edge. It helped create a crease for running back Dalvin Cook to explode and burst downhill for a big gain. Right guard Josh Kline continues to practice well and has been excelling in both pass protection and run blocking. Kline opened up a cut-back lane for Cook in a team drill and held his own in pass protection. He could be a major part of the Vikings’ offense, especially if he can play at a high level. With the resources Minnesota invested into the interior, they are hoping Kline can play like he did early in his career. During Wednesday’s practice, the offensive line gave Cousins time to work and opened creases for the running backs to work. It appears the blocking schemes will take advantage of each offensive linemen’s skill set.

In the back half of the depth chart, Oli Udoh had a nice pancake block against defensive tackle Armon Watts. You see the flashes of power and quickness from Udoh, but he is incredibly raw from a technical standpoint. In addition to Udoh, undrafted rookie John Keenoy had a great run blocking rep to seal off Tito Odenigbo. He also flashed with a great pass protection rep against Keenoy to set up a beautiful intermediate throw by Jake Browning to tight end Brandon Dillon.

Watts is a flashy player, Odenigbo creating pressure
On the defensive line, Armon Watts had a great run stop on an Alexander Mattison run. He ripped and managed to shed a block to get in the backfield. He also had a quarterback pressure and likely would have sacked quarterback Sean Mannion. Watts was quick off the snap and over-powered guard Dakota Dozier with a bull-rush. There are still plays where Watts doesn’t execute well and look technically sound. When he flashes, Watts is often making big plays. However, there are several moments where you see less consistency.

Ifeadi Odenigbo managed to bend around the corner for a quarterback sack against tackle Aviante Collins. Odenigbo has been continually flashing his diverse pass rushing moves and is becoming more nuanced as a player. He worked within the interior last year and has shifted to an exclusive defensive end role this year. Odenigbo’s ability to bend and turn the corner allow him to win consistently. This is the especially the case now that he is pairing up the technical skills.

In addition, to these two players, defensive end Karter Schult earned the opportunity for second-team reps during Wednesday’s practice. Defensive end Stephen Weatherly apparently left practice and Schult saw his snaps. Schult took advantage and notched a sack against Rashod Hill. He also had two strong plays against the run and clearly has moved up the depth chart little.

Cam Smith standing out in drills
At the linebacker position, Cam Smith had a great play in space where he showed off his speed and range. He diagnosed a pass in the flat and made the stop. Later in the session, Smith had a great run fit to force a Mike Boone run outside. He has been high on the special teams depth chart and could develop into a rotational linebacker in the future.

A Special Teams Update
The main difference on the special teams depth chart was due to the absence of Stephen Weatherly. Irv Smith Jr. moved up to the first-team punt coverage unit and tight end Cole Hikutini took his place with the second-string group.