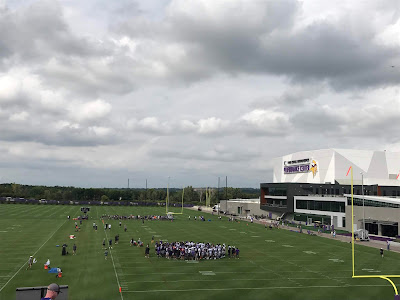 After trading for Kaare Vedvik on Sunday, all eyes were on the Vikings' newest specialist. Daniel House has all of the information in his latest training camp notebook!

During the Vikings’ 13th practice of training camp practice, all eyes were on the specialists.

All eyes on Vedvik
On Sunday, Minnesota traded for kicker/punter Kaare Vedvik from Baltimore in exchange for a 2020 fifth-round draft pick. Head coach Mike Zimmer said they will evaluate Vedvik over the next week to determine whether he will kick, punt, or possibly do both. For the largest portion of practice, Vedvik was punting on the middle field. The session lasted roughly 20 minutes and he was bombing deep punts with extensive hang time. Several of them stretched more than 70 yards and angled directionally to the corner. Many of his punts were angled to the sideline and gained additional yardage because of spin. Vedvik was working individually with the coaches on a variety of different kicks. Dan Bailey and Matt Wile didn’t do any kicking in Monday’s session. There also wasn’t a live special teams period during practice. Near the end of practice, he warmed up to kick field goals off the tee. At one point, he knocked down attempts from 60 and 61 yards. Obviously, this is very different than kicking through the entire operation, but it illustrates Vedvik’s big leg. We’ll soon see how he handles all of the kicking responsibilities in live situations.

After practice ended, Dan Bailey, Matt Wile, Austin Cutting, Chad Beebe and Vedvik stayed to work with the coaches. Cutting was snapping the ball while they worked on holding technique. Wile didn’t take any reps during any portion of Monday’s practice. Head coach Mike Zimmer said Wile is dealing with a cut on his finger. Beebe took the vast majority of holding reps, but Vedvik, and even Dan Bailey, handled a couple. The Vikings continue to experiment at the specialist positions to find the right combination. Minnesota’s personnel staff clearly saw Vedvik’s talent and determined he could upgrade either the punting or kicking games. His versatility leaves them with options regarding how they approach his current and future roles.

Heavy special teams work
Most of the attention was on the specialists, but there were a few other notable takeaways from Monday’s practice. The coaches were very intense in many of the sessions and pushed players in the position sessions. When the team was working on kickoff return technique, Mike Zimmer was out in the middle of the field with special teams coordinator Marwan Maalouf. They were both working together and teaching players the correct alignments and technique. This was some of the most hands-on time I’ve seen Zimmer spend with the special teams units during team work.

All of the position coaches were stopping players to correct technique and were fired up during the team sessions. After picking up so many penalties in last week’s preseason game against New Orleans, it’s clear fundamentals and technique have been a big emphasis.

Defense wins red zone and team sessions
The Vikings’ defense won the team red zone drill on Monday. Kirk Cousins tried to force a pass into running back Dalvin Cook and it was intercepted by linebacker Eric Kendricks. On the next play, cornerback Mackensie Alexander had a beautiful pass breakup in the front left corner of the end zone. The drill ended when a Danielle Hunter pressure led to a short check down to tight end Tyler Conklin in the flat. Cousins was picked off twice by Kendricks in Monday’s session. The second came when he tried to connect with wide receiver Stefon Diggs over the middle. Kendricks dropped into coverage over the middle and hauled in the pass as Cousins tried to zip it into a traffic.

In another portion of team drills, Everson Griffen bull-rushed Riley Reiff, backing the left tackle into Kirk Cousins for a sack. A few plays later, Hercules Mata’afa plowed through Dru Samia for a touch sack. Samia continued to work with the second-team at right guard and will benefit from reps against increased competition. It’s also worth noting tight end Brandon Dillon occasionally mixed in with the second-team unit.

James, Smith and Kearse stand out in the secondary
Cornerback Craig James picked off a deep Jake Browning pass intended for Jeff Badet up the seam. He also had a beautiful pass breakup against Dillon Mitchell to end the two-minute drill. James has put together a few strong practices, but hasn’t climbed up the depth chart yet.

Quarterback Jake Browning has been struggling recently. Safety Derron Smith continues to work with the second-team and is high on the special teams depth charts. He had a notable pass breakup near the sideline against tight end Cole Hikutini. Jayron Kearse also had a fantastic run stop on the edge against an Alexander Mattison outside run. Earlier in practice, Kearse shut down a Chad Beebe corner route and used physicality to slow Beebe out of his break.

As camp progressed forward, the offensive volume and speed of the game increased. It’s resulted in many situations where Browning doesn’t get the ball out quick or inaccurately reads a defense. He has taken sacks, thrown high passes and unnecessarily forced throws. After a strong preseason game and improved reps in training camp practices, Kyle Sloter is starting to gain separation from Browning.

After spending the majority of camp at left guard, Dakota Dozier continued to work at left tackle. With a lack of depth at this position, it’s apparent the coaches want to assess Dozier’s versatility. So far, he’s handled the transition well and beautifully sealed the edge for an Alexander Mattison outside run.

Jeff Badet seeing more action
Wide receiver Jeff Badet was getting the vast majority of kickoff return reps with the first-team unit. He had two returns in the first preseason game and could claim this job if the team decides to keep running back Mike Boone over Ameer Abdullah. Badet ran several smooth routes in the 1-on-1/team drills and is starting to make a case for one of the final receiver spots. However, after roster cuts, I do expect the Vikings to search the waiver wire for additional help at the position.