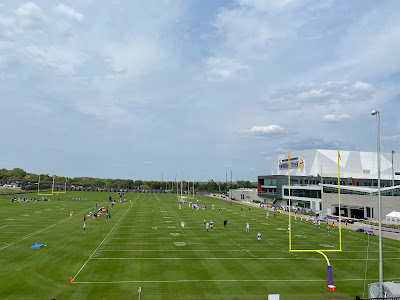 K.J. Osborn is squarely in the mix for Minnesota's third wide receiver job. Daniel House explained why and shared his training camp observations.

The Vikings continued to evaluate trench players during Wednesday’s training camp practice. Many different offensive and defensive linemen took advantage of additional 1-on-1 and team reps.

Minnesota also spent a large portion of practice within rushing, red zone and situational periods. While doing that, tight end Irv Smith Jr. shined. Smith continues to get open off a variety of different routes and is making his presence known inside the 20-yard line. His quickness and explosiveness in and out of breaks create mismatches against opposing linebackers and safeties. During one red zone period, Smith burst up the seam and snatched a 20-yard touchdown in between safeties Harrison Smith and Xavier Woods. The former Alabama tight end keeps making explosive plays throughout practices.

Osborn is making a strong impression

Other than Smith, Dalvin Cook and Justin Jefferson, nobody is making more noise than wide receiver K.J. Osborn. The second-year wide receiver runs solid routes and consistently creates separation. Osborn is a very sudden route runner who changes direction really well. Within one team period rep, he ran an excellent return route against cornerback Mackensie Alexander. He sold the slant, planted his inside foot, squared his shoulders to the quarterback and broke back to the sideline. Osborn was very sudden and explosive out of the break and finished the play by making an impressive diving grab. Not only that, but earlier in practice, he got position and hauled in a deep back-shoulder fade from Jake Browning. Osborn has been making these type of splash plays throughout camp. It is why he continues to work with the first-team unit in 11 personnel sets.

Throughout the afternoon, Minnesota rotated players at right guard and left tackle. Tackle Rashod Hill walked out for practice in shorts and eventually left the field. This opened the door for left tackle Blake Brandel, who put together a strong practice on Tuesday. Brandel and Oli Udoh split first-team left tackle reps throughout team drills. However, Brandel was less consistent within Wednesday’s team and 1-on-1 periods. Several pass rushers, including Patrick Jones, beat him around the edge with speed. Brandel shows flashes of potential but still lacks consistency.

Additionally, Udoh rotated with Dakota Dozer at right guard. Udoh again took advantage of those reps. He effortlessly passed off stunts on three separate occasions. Udoh communicated well and anchored at the correct depth against Dalvin Tomlinson, Armon Watts and D.J. Wonnum. His quickness, lower body power/technique and awareness are apparent when he is being tested off stunts. Not to mention, during Wednesday's 1-on-1 drill, he won a rep against Patrick Jones by beautifully anchoring against a bull rush. Udoh is certainly making a strong push for the starting right guard job.

Many fans have been asking me about left tackle Christian Darrisaw. The Vikings' first-round draft is working his way back from offseason core muscle surgery. Darrisaw is getting closer and actually wore pads for Wednesday’s session. He went through a short period of individual drills but did not participate in any other portions of practice. Darrisaw is apparently getting closer and should see more extended action in the next couple of days. It will be fascinating to see him work against Denver’s pass rushers during next week’s joint practices.

Right guard Wyatt Davis also returned after missing the past two practice sessions with an injury. Davis worked with the third-team unit and spent time getting acclimated again. He was an up and down performer in the stunt drill but put together an excellent rep against Jalyn Holmes. Davis also burst into the second level and popped Tuf Borland. The former Ohio State teammates exchanged a few words and Davis punched Borland. A small scuffle ensued, however, it was quickly stopped by teammates and coaches.

Along the defensive line, two players (outside of Hunter) are grabbing my attention. First, defensive tackle Armon Watts is playing really well. Watts deconstructs blocks, controls gaps and creates consistent disruptions. He is also effectively rushing the passer from inside. At one point, Watts burst into the backfield and totally disrupted a play-action bootleg. He also pursued a screen pass on the perimeter and completely stopped it. Then, a little later, he again got extensive interior pressure and altered the timing of a throw. Watts has always been an effective pass rusher but looks like he improved both physically and technically this offseason. As Michael Pierce works his way back from a calf injury, Watts is receiving first-team reps alongside Dalvin Tomlinson. He is certainly making the most of those snaps.

Tomlinson also made a noticeable impact in rushing periods and team drills. The big defensive tackle gains penetration and often forces cutbacks. He also flashed as a pass rusher throughout practice. Tomlinson generated one notable pressure in team drills and split 1-on-1 reps with guard Ezra Cleveland.

The Vikings certainly have more overall talent and depth at the defensive tackle position than they did last year.

D.J. Wonnum is another defensive lineman who continues to make a strong impression in camp. He dominated two 1-on-1 reps against tackle Evan Ksiezarczyk by using a blend of speed and power. Wonnum also picked up two additional pressures in team periods. As I mentioned in Tuesday’s notebook, his versatility could be a major weapon for the Vikings in 2021.

Setting up a situation and testing Joseph

The Vikings closed out practice by setting up a situation. Minnesota's first-team offense trailed 7-7 with 1:11 left and the ball on its own 25-yard line. Jake Browning worked the team up the field by connecting with Adam Thielen and Irv Smith. Then, once the unit approached midfield, a pass breakup by linebacker Nick Vigil (over the middle against Irv Smith) and a deep Browning throwaway ended the offense’s chances. Minnesota instead sent Greg Joseph out for a 55-yard field goal attempt. Joseph kicked into the wind and missed the try wide left.

During Wednesday’s practices, Joseph missed two of his three live field goal attempts, including a 45-yard attempt from the right hash. His lone successful attempt was a 38-yarder early in practice.

Wide receiver Dede Westbrook wore pads for individuals, but eventually took them off and rehabbed on a side field. Defensive tackle Michael Pierce also participated in the first portion of practice before spending the majority of Wednesday's session with Minnesota’s trainers.