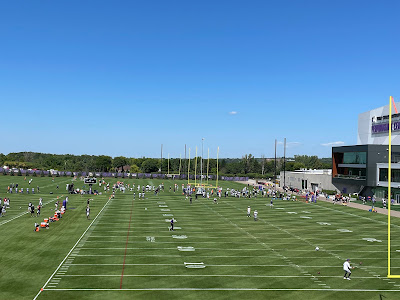 The Vikings-Broncos joint practice gave us a chance to see many different players square off against quality competition. What did Daniel House learn? He shared his thoughts in this notebook!

Mike Zimmer and Vic Fangio are using the Vikings vs. Broncos joint practices as an evaluation tool. The reps gained in these sessions are helping them determine what players can do against other NFL competition.

During Wednesday’s first joint practice between Denver and Minnesota, we got a chance to see both teams battle up front and in the secondary. Fangio and Zimmer dialed up aggressive blitzes, stunts and packages to test their offensive lines.

While doing so, both the Vikings and Broncos' units likely did not receive strong grades.

Minnesota’s defensive tackles were making plays all afternoon. During team drills, Armon Watts picked up a pair of run stops and quarterbacks pressures. Denver quarterback Teddy Bridgewater dropped back and Watts was almost instantly in his face. The third-year defensive tackle won with a combination of power, quickness and solid hand technique. Within the 1-on-1 drills, it was fun watching Watts battle against Broncos rookie Quinn Meinerz. Denver’s rookie center beautifully anchored against him early in the drill. Then, a little later, Watts utilized a blend of power and speed to blow past Meinerz. Overall, Watts has easily been one of the top performers throughout Vikings training camp.

The success within Minnesota’s interior extended to nearly every other defensive tackle. Michael Pierce was having his way against Lloyd Cushenberry in 11-on-11 action. Pierce muscled past Cushenberry in 1-on-1 drills and used an arm move to get past him in team drills. The Vikings’ big defensive tackle also got his hands into a passing lane for a pass breakup. All day, Pierce was pushing pockets and making an impact against the run.

Additionally, Dalvin Tomlinson got into the backfield for a run stop and logged a pair of pressures. The Tomlinson-Pierce duo is looking extremely formidable throughout training camp. Not to mention, Watts and Sheldon Richardson are showing the type of situational value they can provide. This will help keep Pierce and Tomlinson fresh throughout games.

And it wasn’t just the interior of Minnesota’s defensive line either....

The Vikings defensive ends were creating pressure throughout practice. D.J. Wonnum breezed around Garett Bolles twice during Wednesday’s 1-on-1 drills. Throughout camp, Wonnum’s versatility is being used very creatively by Mike Zimmer. It is becoming apparent that Zimmer would like to design specific packages for the second-year pass rusher. Rookie defensive end Janarius Robinson also had two great reps against Drew Himmelman. Robinson set his rush up on the edge, got Himmelman to over-set and beautifully countered inside.

Also, defensive end Jordan Brailford utilized a speed rush around the corner and beat Broncos tackle Quinn Bailey. Brailford’s length and explosiveness are traits that stand out while watching him rush the passer. I really like his potential, but do not think the Vikings will have room for him on the roster.

I spent most of my time zoning in on the Vikings defensive line during this practice session. However, during the team and 1-on-1 drills I saw, the entire Vikings offensive line was struggling with stunts. Bradley Chubb, Shelby Harris and Dre’Mont Jones were all accumulating pressures off stunts and regular rushes.

At the end of practice, Minnesota’s offense trailed 21-21 in a late-game situation. Justin Strnad and Jonathon Cooper got pressure on the left side against Rahsod Hill and Ezra Cleveland. Then, on the other side, Malik Reed and Jonathan Reed ran a stunt. Right guard Dakota Dozer froze and Reed got a free run at Kirk Cousins. All day, nearly every offensive linemen struggled with stunts. For example, when Denver and Minnesota drilled stunts, rookie Wyatt Davis was having a difficult time passing off his player and recovering. He got better as the drill progressed but must keep working on that area of his game.

The Vikings and Broncos struggled within the situational, red zone and team drills. Denver quarterback Teddy Bridgewater forced some passes and was less effective throwing vertically. Drew Lock had similar issues and locked into a couple of receivers within 11-on-11 drills. At one point, during the two-minute drill, he tried to fit a pass over a linebacker and threw the ball a little late. The pass was tipped multiple times and intercepted by safety Xavier Woods. Throughout the day, Lock hesitated quite a bit and did not throw with much anticipation. I would like to see him cut it loose and throw his receivers open more frequently. With that being said, I thought Lock won the day, but not by much.

Bridgewater had a long 45-yard touchdown pass to Jerry Jeudy. However, a Nick Vigil blitz (he was really good as a blitzer today) and Armon Watts pressure would have wrecked the play in a real game. Not to mention, in the secondary, cornerback Bashaud Breeland tried to jump the route and Jeudy won a contested catch battle against him. Jeudy regained his footing and ran another 20 yards for a touchdown.

Earlier in practice, Breeland had a really strong rep against Jeudy in 1-on-1 drills. Jeudy initially stemmed inside and redirected to an outside release. Breeland remained tight to Jeudy out of the break and forced an incompletion. Overall, there were up and down moments for Breeland, but he made his fair share of plays too.

Jeudy is a remarkable talent, Dukes catches my eye

I particularly enjoyed watching Jerry Jeudy during this practice session. His releases and footwork left me in awe. Jeudy articulately sets up his routes and attacks leverage well. Within a 1-on-1 drill, he ran a beautiful corner route against Mack Alexander. He attacked inside, used a beautiful head fake at the top of his route and gained extensive separation vs. Jeudy. The former Alabama wide receiver was getting open all day by running extremely detailed routes. Jeudy certainly looks like he could have a monster year.

While watching Denver’s wide receivers, I was impressed with undrafted rookie DeVontres Dukes. He had a great contested catch near the sideline against Cameron Dantzler in 1-on-1 drills. Dukes did an excellent job of getting position but was flagged for taunting after spinning the ball in Dantzler’s face. Dukes responded later and beat Dantzler deep up the seam for a diving touchdown grab. I was rather impressed with the young receiver’s size, ball tracking skills and physicality at the catch point. Despite having 6-foot-4, 216-pound size, Dukes was getting separation by moving well in and out of breaks. If Dukes is cut in a few weeks, I think he could draw interest from other NFL teams.

On the Vikings side, Chad Beebe had a strong afternoon. At one point, ran a crisp route to the back right corner of the end zone and hauled in a touchdown. He also got separation off an out-breaking route and made a dynamic play after the catch. Beebe did have one drop but still put together a rather solid afternoon.

Not only that, but K.J. Osborn kept making plays. Within a team drill, he ran an out route to the sideline, exploded out of the break and got extensive separation. Osborn was getting open off a variety of different routes and even made a great block on the perimeter to spark an explosive Dalvin Cook outside zone run. The second-year wide receiver is executing the details and separating himself from everyone else in that position group.

One other player caught my attention while watching practice. Broncos rookie pass rusher Andre Mintze was consistently getting pressure off the edge. I was impressed with his overall speed and explosiveness. Mintze does not have very long arms but compensates for it by using his hands effectively. There were even a few reps where he got position in the running game. Mintze is less consistent in this area and must continue getting physically stronger. However, I think he might be a player worth developing over the next or so.

Early in practice, Vikings kicker Greg Joseph made all five of his field goal attempts from 35-52 yards out.

Wide receiver Blake Proehl's leg gave out while he was running a route. Proehl left the field on a cart and did not return.