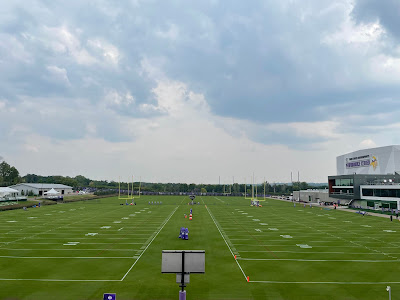 The Vikings held another unpadded practice Monday at TCO Performance Center. Daniel House shared all of his observations in another training camp notebook!

The Vikings were supposed to hold their first padded practice of training camp on Monday, but an NFL rule forced them from doing so, according to The Athletic’s Arif Hasan. Minnesota needed to hold one more practice before it could strap on the pads.

The Vikings’ coaches ripped up the initial practice script and focused on more installation, 1-on-1 drills and rushing periods.

While attending two practice sessions, I have been very impressed with tight end Irv Smith Jr. He is poised for a bigger role this season after the Vikings released Kyle Rudolph. Smith runs excellent routes and is smooth in and out of breaks. He was very sudden and explosive while working against linebackers in the 1-on-1 drills. At one point, Smith stemmed outside, snapped his head around at the last second and torched linebacker Christian Elliss over the middle. Smith’s strong route running continued to grab my attention throughout the workout.

During one team period, he popped off a deep crossing route into zone coverage and Jake Browning hit him in stride for a 20-yard gain. Then, within a red zone period, he ran a tight end screen and made an explosive play after the catch. That specific rep was fueled by Brian O’Neill. He got out in front of Smith and found work in the second level. As always, O’Neill’s movement skills are extremely impressive, especially off outside zone runs and screen passes.

Overall, Smith’s route running looks even better than it did last year. He is consistently creating mismatches, gaining separation and making tough catches all over his frame. The third-year tight end is definitely looking like he could have a breakout season.

Proehl looks great in 1-on-1 drills

While watching the 1-on-1 WR/DB drills, I was really impressed with wide receiver Blake Proehl. He ran a smooth out route against cornerback Harrison Hand and gained several yards of separation. Later in the same session, he smoothly accelerated out of his break and got open against safety Xavier Woods. Proehl also flashed during one portion of the team session. He created space off a post, absorbed a big hit and held onto the ball in traffic. Outside of Justin Jefferson, Proehl was creating the most separation in that drill.

Jefferson is fun to watch

Justin Jefferson is simply a treat to watch. His explosiveness, flexibility and acceleration in and out of breaks are incredible. Within the situational period of practice, he ran a corner route and beautifully adjusted to an underthrown Jake Browning pass. Cornerback Bashaud Breeland was in tight coverage, but Jefferson got in perfect position. The second-year wide receiver beautifully sets up his routes and executes all of the details to perfection. I can’t imagine what he will do this season while playing a 17-game schedule. Keep in mind, Jefferson barely played during the first two games of the 2020 season.

Osborn making his mark in camp

Wide receiver KJ Osborn is also having a really strong camp. He swiftly transitioned out of the break and got open off of an out against cornerback Harrison Hand. Osborn is consistently running sharp routes and making dynamic plays in space. After Olabisi Johnson tore his ACL last week, the door opened even wider for Osborn. The former Miami wide receiver was getting first-team reps with Jefferson and Adam Thielen in three-wide receiver sets. Osborn is making a strong impression and is a player worth keeping an eye on during preseason games.

The Vikings shuffled the offensive line around for team drills. Rashod Hill was not participating, so Oli Udoh slid out to left tackle. While Udoh was on the edge, Dakota Dozier took reps at right guard. At this stage of camp, it is very difficult to assess the offensive and defensive lines. However, defensive end Danielle Hunter has already been disruptive. His speed and explosiveness were noticeable off the edge. Hunter looks healthy and ready to make some noise this season.

Keeping an eye on the young pass rushers

I was also particularly impressed with Patrick Jones’ first step. He has some burst and frequently turns the corner against offensive tackles. Jones is one player I will be keeping an eye on during padded practices. Additionally, Janarius Robinson’s length and athleticism are quite impressive. He has all of the traits that Minnesota is looking for from a pass rusher. The biggest question is: can he master all of the technique this year? I will have a better idea of Robinson’s skills after seeing padded practices. However, his frame and traits almost immediately grabbed my attention.

Breeland works into the rotation more, Vigil impresses in coverage

Cornerback Bashuad Breeland saw more action during Monday’s practice. Breeland has been slowly working his way back following offseason shoulder surgery. While seeing extended reps, Breeland made plays. During 1-on-1 drills, he tightly covered KJ Osborn and forced a pass breakup. Then, a little later, he tightly covered a Dan Chisena fade and forced an incompletion. Breeland’s physicality and transition quickness help him tightly mirror shifty and sudden wide receivers.

Linebacker Nick Vigil again performed well in coverage. He had several excellent reps in 1-on-1 drills, including one pass breakup. Vigil looks like he will be a very valuable asset as a coverage linebacker on passing downs.

The Vikings placed quarterbacks Kirk Cousins, Kellen Mond and Nate Stanley on the Reserve/COVID-19 list. With all of those players in COVID-19 protocol, Minnesota had to bring in more quarterbacks. The team signed Case Cookus, who split reps with Jake Browning during Monday’s session. Browning had an up and down session but made a few flashy plays. Within one team period, Browning rolled to his right and fired a touchdown pass to Adam Thielen in the back right corner of the end zone. He made a great play on the move and showed off some velocity.

Guard Wyatt Davis, center Cohl Cabral, tight end Tyler Conklin and offensive tackle Christian Darrisaw all did not practice. Conklin was not spotted early in practice, but eventually made his way out later. Sam Ekstrom of Purple Insider reported that Conklin had his left ankle in a wrap for precautionary reasons. Rashod Hill also did not participate in the team portion of practice.

The Vikings claimed former Seahawks quarterback Danny Etling off of waivers, according to Tom Pelissero.