8/3 Vikings Training Camp Notebook: Keeping an eye on the trenches 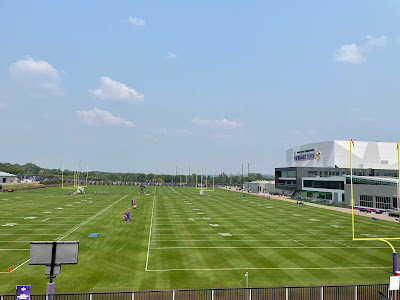 The Vikings strapped on pads and picked up the intensity during Tuesday's training camp practice. Daniel House shared all of his observations in this notebook!

The pads were popping for the first time during Tuesday’s practice at TCO Performance Center. Minnesota set up 1-on-1 drills and turned up the intensity within team periods.

This gave the coaching staff an opportunity to see how players performed in the trenches. I kept an eye on all of the drills and shared my observations in this notebook:

Zoning in on the offensive line

When the Vikings’ offensive and defensive linemen went through 1-on-1 pass blocking and stunt drills, several players stood out.

Oli Udoh was tested by stunts and responded extremely well. Within those reps, he lined up alongside Garrett Bradbury, Mason Cole and Brian O’Neill. Udoh communicated with them, passed off the defensive linemen and anchored at the right depth. Then, during a 1-on-1 rep, Udoh held his ground against pass rusher Patrick Jones’ bull rush.

While Udoh was working with the second-team unit, he blew into the second level and pancaked linebacker Chazz Surratt in the second level. He got a head of steam downhill and helped open an inside rushing lane for running back Kene Nwangwu. Udoh had a strong day of practice and is standing out among the interior offensive linemen. The third-year guard/tackle split starting right guard reps with Dakota Dozier throughout red zone and team sessions.

Additionally, tackle Blake Brandel had two positive reps against both Janarius Robinson and D.J. Wonnum. Brandel has been an up and down performer in team drills but held up well within the 1-on-1 drills.

When it comes to defensive linemen, Danielle Hunter continues to dominate. He burst around the edge for two 1-on-1 wins against Rashod Hill. Hunter’s blend of explosiveness and power instantly stood out. He looks healthy and poised for a big year.

The Vikings continue moving D.J. Wonnum all over the field. He aligns as a linebacker, edge rusher and pure defensive end. All of those positions take advantage of his athleticism, length and movement skills. Wonnum had two pressures while working with the first-team unit and altered a throw by using a speed rush against Rashod Hill. The former South Carolina pass rusher looks like he could be a versatile weapon for the Vikings in 2021.

I also had my eye on Minnesota’s rookie defensive ends. Janarius Robinson is really quick and explosive. At one point, he chased down a screen in space and effectively set the edge on a run play. Robinson has unique traits and I am looking forward to seeing what he can do throughout training camp and the preseason. My feelings are similar regarding Patrick Jones. He has nice burst and power, but I want to see more moves within his arsenal.

Browning looks comfortable in the offense

Quarterback Jake Browning made several tight-window throws during Tuesday’s session. Within an early red zone period, he zipped a touchdown pass in the back right of the end zone to wide receiver Chad Beebe. Mackensie Alexander had relatively tight coverage, but Browning placed the ball really well. In addition, during a team season, he found Adam Thielen off a crossing route. He fit the pass in-between two linebackers and displayed a little velocity while doing so.

Browning also helped produced one of the day’s biggest plays. He again connected with Thielen, who beautifully tracked a deep ball. Patrick Peterson was in tight coverage, but Thielen made a phenomenal last-second adjustment. Not to mention, Browning’s ball placement and touch were excellent. The former Washington quarterback looks more comfortable throwing the ball downfield than he did two years ago. Not only that, but Browning’s mechanics look much improved, especially when you watch his lower half. He is using his hips and core to improve his power and release. This change has helped Browning become a more accurate and efficient downfield passer. Additionally, he throws better on the run and is more consistent off play-action boots.

After seeing Browning practice early in camp, I think he is turning into a relatively solid backup option for the Vikings. He looks comfortable within the offense and does not make many catastrophic mistakes.

Finally, tight end Irv Smith Jr. continued to make plays. During a red zone period, he hauled in a one-handed touchdown grab in the flat with Cameron Smith and Patrick Peterson in coverage. So far, Smith is putting together a solid training camp. He has displayed his instincts, range and physicality throughout practice sessions. Within rushing periods, he is in the right run fit before the whistle blows plays dead. It seems like Smith is firmly in the mix to become the team’s third linebacker.

In the final portion of practice, kicker Greg Joseph received live reps. Joseph ended the situational drill by draining a 52-yard field goal. Then, within the special teams period of practice, Joseph made five of his six tries, including makes from around 30 (middle hash), 40 (right hash), 42 (left hash), 44 (right hash) and 50 yards out. His lone miss was a 47-yard field goal (left hash).

Left tackle Christian Darrisaw, center Cohl Cabral and right guard Wyatt Davis and tight end Tyler Conklin all did not practice. Wide receiver Dede Westbrook participated in the first portion of practice, but then rehabbed. Defensive tackle Michael Pierce also wore pads and went through portions of individual and position drills. Other than that, he rehabbed on the side field with trainers. Pierce is still easing his way back from a calf injury.