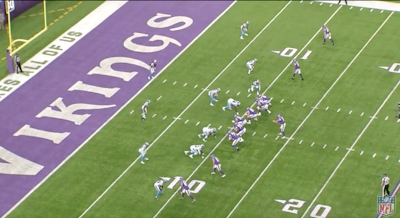 Quarterback Kirk Cousins orchestrated a game-winning drive during the Vikings' 28-27 win over the Panthers. Daniel House analyzed all of the film and advanced metrics. Which important variables are helping Cousins find a groove?

Many Vikings fans have been waiting for quarterback Kirk Cousins to produce a clutch two-minute drive in 2020. He delivered during Sunday’s 28-27 win over the Panthers. Despite all of the numbers being against Minnesota, the offense found a way.

The Vikings only had a 14.3 win probability when the drive began on their own 25-yard line (1:51 remaining). Cousins wasted no time and quickly navigated Minnesota up the field off five intermediate completions. Once the Vikings reached the red zone, Kirk faced a second-and-goal situation with 50 seconds left.

During a similar situation earlier in the game, Carolina sent Cover 0 pressure. When Cousins saw it, he exploited man coverage and connected with Justin Jefferson for a touchdown. However, with the game on the line, Carolina took a slightly different approach. The Panthers appeared to have Tre Boston in single-high with Juston Burris rolled down toward the box. Kyle Rudolph’s drag drew Burris, which freed up the seam for Chad Beebe. He stemmed outside, used a head fake, and got Corn Elder to open his hips. Cousins zipped a pass to the back of the end zone and Beebe went up to get it. The Vikings’ wide receiver redeemed himself after his critical special teams lapse nearly cost Minnesota the game.

Beebe’s muffed punt increased Carolina’s win probability by 17.7 percent. After that blunder, the Panthers had a 96.5 percent win probability with 2:18 remaining. On the next drive, quarterback Teddy Bridgewater missed D.J. Moore in the back of the end zone and Carolina settled for a field goal. Head coach Matt Rhule and offensive coordinator Joe Brady called too many passing plays in the final moments. This odd approach gave Minnesota an opportunity to create the game-winning drive. If the Panthers had called two more running plays, the Vikings may have never started a comeback drive.

Cousins’ touchdown connection to Beebe ultimately increased the Vikings’ win probability by 34.6 percent, which is currently the largest jump of any play during Minnesota’s 2020 campaign. Each year, there are always two games a team wins that probably shouldn’t happen. On the other hand, NFL clubs usually lose a pair of games they are heavily favored in. The Vikings checked two of those four boxes in consecutive weeks.

Cousins is Finding a Groove

Since the bye week, Kirk Cousins has settled in. He currently ranks No. 3 in average intended air yards (9.1) among quarterbacks with at least 11 starts, according to NFL Next Gen Stats. Additionally, more than 80 percent of his passes have been on target, which is the third-best mark in the NFL. He has also posted the third-lowest bad throw percentage (13.8 percent). Cousins is playing aggressively, but at the same time, he is limiting catastrophic mistakes. Last year, I frequently said Cousins wasn’t taking enough chances. His 12.8 percent aggressiveness percentage was the fifth-lowest mark in 2019, according to NFL Next Gen Stats. This year, the figure has jumped to 18.4 percent, which is the second-highest output among quarterbacks who have played at least 11 games.

Cousins’ increased aggressiveness is also illustrated by one other key metric. His 62.2 percent expected completion percentage is the third-lowest output among quarterbacks with at least 11 starts. This metric essentially gives us a better idea of overall throw difficulty. After breaking things down even further, only Russell Wilson (6.0) has a higher completion percentage above expectation (5.9). Overall, Cousins is taking chances and completing more difficult throws.

He’s also been thriving on passes between 10-20 yards downfield. Cousins’ past four Next Gen Stats spray charts illustrate the type of success he is having through the intermediate passing game.

Entering the bye week, Cousins said he wanted to eliminate costly errors that shifted the outcome of games. So far, he has done an effective job of this. Gary Kubiak’s scheme is also maximizing Cousins' strengths. The Vikings’ offensive coordinator scaled back the frequency of deep drops, implemented more play-action, and got Cousins out of the pocket off boots. Kirk is extremely accurate in these situations and loves throwing intermediate/deep over routes. When Cousins has time, gets the ball out quick, or moves off of boots, he thrives.

While talking about Cousins, we also have to discuss rookie wide receiver Justin Jefferson's dominance. The former LSU star has rapidly become one of the league’s top pass catchers. His dynamic route running, elite body control skills, and yards after the catch ability, have grabbed the attention of everyone. All of those traits were on display in college and perfectly transitioned over to the NFL.

Each week, Jefferson’s Next Gen Stats route charts look like a beautiful painting. His overall route diversity and versatility are two things that make him such a special wide receiver. He threatens teams at every level and can work from multiple alignments. 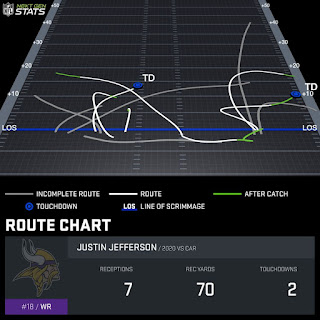 During Sunday's game, Jefferson essentially utilized a whip route in the red zone. However, instead of pivoting, opening up completely, and reversing course, Justin's initial slant simply broke off into an out. Some coaches apparently call it a Colorado route. Justin stemmed inside, dropped his hips, whipped his head around, wiped away contact, and made an explosive transition from break to drive foot. Jefferson also finished the play with a fantastic adjustment and play after the catch.

Earlier in the game, Minnesota received a Cover 0 blitz matchup and man coverage across the board. The Panthers had one underneath defender covering the middle, but Cousins moved him with his eyes. More importantly, Jefferson had a 1-on-1 matchup and exploited Rasul Douglas. Jefferson stemmed outside, used a subtle head fake, was explosive out of the break, and got enough separation to make the grab. Douglas looked like he thought Jefferson may run the corner route, but the Vikings’ star snapped inside.

So many people thought Jefferson was exclusively a slot receiver at LSU, but they didn’t see what he did on the outside in 2018. His success in that role was a key variable during the Vikings’ evaluation process. Minnesota’s offensive staff knew he could thrive out of both alignments during his NFL career. This year, he has stressed defenses off intermediate crossers, quick outs, posts, deep over routes, shake routes, and vertical fades. Just about every single route has been utilized on numerous occasions. Jefferson is leading the league in yards per route (2.90, according to PFF’s Twitter) and ranks No. 10 in yards after the catch (273 yards, per AirYards.com). What’s more, he has posted an impressive 13.7 average depth per target. Jefferson stresses defenses at every single level and is putting together a historic rookie season. Each week, we are witnessing a star launch his career.

Wonnum, a fourth-round draft pick in this year’s draft, has flashed on a rotational basis. He is still tuning up the technical components of his game but is already making splash plays in 2020. He sacked Aaron Rodgers in the final seconds to complete a 28-22 win over Green Bay. Two weeks later, Wonnum stunted inside for a critical third-quarter sack against Chicago. Each of those plays dramatically impacted game outcomes.

Out of all the rookies not named Justin Jefferson, I might be most excited about Wonnum’s future. Coming out of South Carolina, we all knew Wonnum had special athletic traits, but his lack of college production created question marks. Some of this was attributed to a bothersome ankle injury he suffered in 2019. Despite that, Wonnum bounced back and grabbed the attention of scouts.

During his final season with the Gamecocks, he posted 37 tackles (9.5 for loss), 4.5 sacks, an interception, and blocked kick. Defensive line coach Andre Patterson saw those flashes and pounded on the table for Wonnum. In recent weeks, the Vikings have started to witness his overall upside and potential. Wonnum has posted four quarterback hits and a sack over the past three games. There are also reps where his pass rush angle has forced quarterbacks to step into sacks. Those plays don’t show up on the stat sheet but are very impactful. Wonnum does need to tighten up his technique (especially against the run), however, we expected that would be the case.

At the end of the day, all of these flashes are just the beginning for the Vikings' young pass rusher. After a full offseason of work (hopefully) with Patterson, Wonnum could be poised for a monster sophomore season in the NFL.

Note: Special thanks to Deryck for providing the data I needed for this piece.