Upon Further Review: Vikings vs. Bears 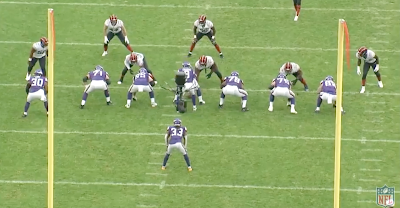 After Sunday's offensive performance, where do the Vikings go from here? Daniel House analyzed key plays and statistics from Minnesota's 16-6 loss.


When the Vikings traveled to Soldier Field, many people anticipated Chicago's potential defensive scheme. A dominant Bears defense stopped Minnesota's rushing attack and forced them to make plays through the air. Running back Dalvin Cook was held in check and Chicago’s defensive line dominated. Quarterback Kirk Cousins struggled to get the ball out quickly and left receivers open throughout the day. After averaging 193 rushing yards per game through the first three weeks, the Vikings’ rushing attack was held to just 40 yards on 16 carries.

Wide receiver Stefon Diggs is reportedly frustrated with the offense and much of it is probably related to the team’s rushing mentality. Adam Thielen and Stefon Diggs aren’t as involved in the offense. The duo has combined to tally just 41 targets, 26 catches, 388 yards and three touchdowns. Head coach Mike Zimmer has made it known he wants to establish the running game and it has impacted the involvement of two star wide receivers.

When teams take away Minnesota's rushing attack, the entire unit becomes one-dimensional. Opposing pass rushers get placed in long-down situations and defensive coordinators force Kirk Cousins to move in the pocket. There were many instances where Cousins held onto the ball too long or didn’t step up to extend a play. When watching the All-22 view, there are moments where he has time to make a decision, but decides to toss a check down. Near the end of the third quarter, fullback C.J. Ham had more targets than both Stefon Diggs and Adam Thielen.

At times, the offensive line struggled to adequately protect Cousins, but he still had the fourth-most time to throw among all NFL quarterbacks last week (3.05 seconds), according to Next-Gen Stats.

Offensive coordinator Kevin Stefanski dialed up a wide array of long-developing routes, which led to deep drops. On several of those plays, the wide receivers were getting open, but Cousins was unable to step up, or confidently fire the ball into tight windows. He posted a 2.8 percent aggressiveness percentage, which ranked dead last among all Week 4 NFL quarterbacks, according to Next-Gen Stats. After charting plays, the Vikings used play-action just five times. When they did, there were opportunities downfield.

In this play-action example, Cousins faces pressure from the left, but is unable to step up and buy time. He instead fires a quick pass to C.J. Ham in the flat. In the secondary, Diggs was breaking open off a corner route and Adam Thielen stretched the seam.

During another play-action passing play, Cousins has many yards of separation between him and a defender. Instead of pulling the trigger on an intermediate crosser to tight end Irv Smith Jr., Cousins holds onto the ball, the route closes up and he misses the opportunity. There were so many moments where Cousins hesitated and left receivers open downfield. During Sunday’s 16-6 loss, only four of his passes traveled more than ten yards, according to Next-Gen Stats data.

This hesitancy resulted in short throws and check downs to running backs. Cousins finished with an intended air yards figure of 5.2, which was the fourth-worst mark among Week 4 quarterbacks, according to NFL Next-Gen stats. In addition to that, he tallied just -4.8 air yards to the sticks. This tells us the vast majority of his passes were thrown short of the first-down marker. The combination of hesitancy, short passes and long-developing routes, contributed to the offensive struggles. It was magnified even more against one of the league’s top defenses. The Bears’ defensive front dominated many reps and Khalil Mack is simply amazing to watch. Look at how he beautifully dips and bends the edge with ease. On this play, left tackle Riley Reiff had no help and Kirk Cousins was stripped. Cousins has now fumbled six times (two lost) and continues to struggle taking care of the ball in traffic.

As shown below, left guard Pat Elflein lost this rep, but it looked like it may have been the result of a miscommunication between Elflein and center Garrett Bradbury. Later in the game, running back Dalvin Cook also missed a blitz pickup that led to a sack. Wide receiver Stefon Diggs also had a costly fumble that led to three Chicago points.

Cousins was sacked six times on Sunday and not all of them were because of poor offensive line performance. For example, during this play, he had more than three seconds before he faced contact. This is an instance where he didn't step up and try to extend a play.

Here is another example where receivers are breaking open and Cousins doesn't step up in the pocket to buy a little time. I trimmed it up to provide pocket and downfield All-22 angles:


As shown in the clips above, there were still moments where Cousins had a relatively clean pocket and open options. He either hesitated to pull the trigger or didn’t step up in the pocket. Occasionally, there weren't many options downfield. In those situations, Cousins was unable to go off script and create comeback opportunities. Instead, he stood in the pocket and was sacked. Future schemes will need to get the ball out quicker by design. Deep drops and long plays are straining the entire offense. Despite all of that, there were so many plays where Cousins needed to be aggressive and decisive. In the first quarter, he was agressive and missed wide receiver Adam Thielen, who had step up the seam on cornerback Kyle Fuller. This is the exact type of explosive play you have to convert in a game like this.

The other noticeable issue with the Vikings' offense is the overall lack of urgency. There isn’t much tempo variation, which allows defenses to stay fresh and make substitutions. This year, when Minnesota has used small bursts of no-huddle, they’ve been more effective and rhythmic. It forces the wide receivers to run quick routes and gives Kirk Cousins less time to hesitate. Not only that, but the offensive line doesn’t have to protect deep drops. When watching the Vikings’ offense, the tempo feels very methodical and there isn’t much variation. It’s continued late in games, too. On Sunday, the Vikings showed little urgency in fourth quarter. When facing a two-score deficit, they ran the play-clock down and time ticked away. In long-down situations, they also tossed a few passes short of the first-down marker. Numbers support the observation that Minnesota’s offense is playing at one pace. The Vikings are averaging just 56.5 plays per game, which is the third-lowest mark in the league. Much of this is due to the team’s early rushing success. However, against Chicago, the pace never really increased. The Bears’ defense had time to adjust, and this week, the Vikings couldn’t sustain possessions by running the ball.

Minnesota’s situation-neutral seconds per play metric is actually 29.73, which is the ninth-fastest mark in football, according to Football Outsiders. However, no matter the deficit or half, they are staying around the 30-second per play mark. When trailing by seven-plus points, this number goes down by about seven seconds. On Sunday, the Vikings' offense never cranked up the pace. In the future, running plays earlier in the play-clock, or using no-huddle, may help the team's offensive flow and rhythm. By combining pace with quick passing, Minnesota can better capitalize upon its strengths.