An Early Look at the Vikings' 2021 Offseason 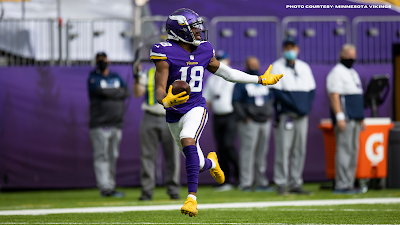 As a unique 2020 season comes to a close, the Vikings are about to enter one of the most fascinating offseasons in recent memory. Daniel House looks ahead to all of the big decisions Minnesota's front office will face.

As a unique 2020 season comes to a close, the Vikings are about to enter one of the most fascinating offseasons in recent memory. Minnesota’s front office is tasked with improving the roster while navigating a tight salary cap situation.

The Vikings parted ways with many key defensive contributors in 2020. As a result, young players were thrust into prominent roles. This was especially the case after Minnesota’s defense lost Danielle Hunter, Eric Kendricks and Anthony Barr to injuries. Nose tackle Michael Pierce also opted out, which drastically impacted the Vikings' defensive line.

This year, the franchise was entering a new phase of the roster construction process. Due to salary cap constraints, Minnesota’s front office released veterans and added young players. This drastically altered the Vikings’ overall depth. Before the season started, coaches planned to use many of those young players as depth options. However, that strategy quickly changed. When injuries hit during the season, we saw just how top-heavy and inexperienced the roster was. It was compounded by the fact coaches had limited access to players during the spring months due to the COVID-19 pandemic. Of all the seasons in recent memory, this was the year Minnesota really needed a complete offseason.

Moving into next year, several young players on the roster will benefit from the experience they gained in 2020. That will naturally help the team’s overall depth. However, while facing financial constraints, the Vikings must upgrade several positions.

The other day, I asked myself, which aspects of this roster need to improve the most? Here is my list:

Many of the Vikings’ defensive issues stemmed from a lack of physicality up front. Minnesota struggled to get consistent interior penetration. All year, the Vikings did not have a dominant nose tackle to take on double teams and get push against the run. Over the years, we have learned how important this is in Mike Zimmer’s scheme. When Zimmer arrived in Minnesota, his first free-agent signing was nose tackle Linval Joseph. Joseph quickly thrived in Zimmer’s scheme and made everything tick. However, once his play started to decline, the Vikings let Joseph walk in free agency and signed nose tackle Michael Pierce to replace him. Minnesota’s front office thought Pierce would be the anchor of its defensive line. However, Pierce eventually opted out of the 2020 season due to COVID-19 concerns. This decision significantly altered the Vikings’ defensive plans.

Minnesota instead started nose tackle Shamar Stephen and 3-technique Jaleel Johnson. Before the season, Zimmer indicated nose tackle was “probably a better position for [Stephen] anyways." It did not seem to go as well as Zimmer anticipated. Stephen wasn’t dominant enough inside and frequently got outmuscled at the point of attack. Additionally, Jaleel Johnson never consistently got one-gap penetration. In Zimmer’s scheme, it is critical to have an explosive 3-technique that can control a gap. The Vikings didn’t receive dominant play out of their defensive tackles this year. In fact, Minnesota had the third-worst rush defense DVOA in the NFL, according to Football Outsiders.

The return of Pierce will certainly provide a major lift, but Minnesota must keep searching for a 3-technique. Johnson is a free agent and I would not expect him to return. The Vikings should draft an explosive 3-technique in this cycle. It may be critical to do so in the first round because the position group is very top-heavy in 2021. After teams see Iowa defensive tackle Daviyon Nixon’s testing metrics, he will shoot up boards. He is an ultra-athletic player who got after the quarterback and created disruptions against the run. Nixon led the Big Ten in tackles for loss (33) and posted 5.5 sacks. After watching him over the past two years, I think he would fit perfectly in Zimmer’s scheme. The Vikings could also target Alabama’s Christian Barmore in the first round. He hasn’t played 3-technique nearly as much in the Crimson Tide’s scheme (rotated between techniques) but has intriguing athletic traits. However, when Barmore did align there, he was extremely disruptive as a pass rusher (see the CFB Playoff Semifinal game).

After Nixon and Barmore, the 3-technique class drops off significantly. With that in mind, Minnesota may need to spend a high pick on the position.

If Minnesota decides to wait until later rounds, it may signal the team's overall confidence in Armon Watts. He played well on a rotational snap share and generated plenty of interior penetration this year.

Big Financial Decisions and the O-Line

If Zimmer wants to get his defense back on track, he must improve up front. It starts by stopping the run and building inside. Additionally, the team should continue adding depth on the edge. Due to salary cap constraints, Minnesota may need to rely on player development and draft picks to address the defensive end position. The Vikings are currently around $10 million over the cap for 2021, so it could be very difficult to make veteran depth signings. Minnesota’s front office must determine which positions are a top priority this offseason. Not only that, but several veterans will likely be released to free up cap space, including tight end Kyle Rudolph. The Vikings can create around $5.1 million by releasing Rudolph.

Minnesota’s front office also faces a difficult decision on the offensive line. Before the season, left tackle Riley Reiff restructured his contract to free up salary cap space. The Vikings are not fully committed to Reiff beyond this season and could save $11.75 million by releasing him. It is a delicate decision because he was a key veteran and top performer on the offensive line. Minnesota must decide how it wants to approach the future at left tackle. Will the Vikings try to reach a new short-term agreement with Reiff to keep him in Minnesota? If not, Erza Cleveland may kick out to tackle. Right now, I do not see the Vikings sliding Brian O’Neill to the left side, but that is also a possibility if Reiff doesn’t return.

At the same time, the Vikings need to find a serviceable left guard. Dakota Dozier was a liability all season and struggled mightily in pass protection. After another offseason of development, Oli Udoh may be ready to start. He could either play tackle or guard, depending upon where Ezra Cleveland is aligned.

If the Vikings decide to spend a top pick on the offensive line, Northwestern tackle Rashawn Slater is a very intriguing prospect. He has played both tackle spots but may fit best at guard due to his 6-foot-4 frame and lack of length. While watching him play over the past couple of years, I was impressed with his overall athleticism and quickness. It will be particularly interesting to see his testing metrics and weigh-in numbers at the combine. If the Vikings want to add a versatile offensive lineman in the first round, Slater might be the best choice.

How can the Vikings free up money?

If the Vikings want to be aggressive in free agency, there are only a couple other ways to free up space. First, we must consider any contract extensions that may be on the horizon. Minnesota could sign right tackle Brian O’Neill to a long-term deal this offseason. It is also possible that pass rusher Danielle Hunter may want a new contract. If that’s the case, Minnesota needs to factor his pay increase into the equation.

In an effort to free up money, the Vikings may try to re-work linebacker Anthony Barr and safety Harrison Smith contracts. Outside of that, there is one other extremely unlikely scenario. Would any team offer Minnesota a trade package for Kirk Cousins? Cousins’ 2022 base salary of $21 million becomes fully guaranteed on the third day of the league year. This means the Vikings would need to trade him before March 20.

If the team were to move him before that date, they would incur $20 million in dead money, along with an $11 million cap savings. In the event Minnesota’s front office and ownership group want to dramatically reshape the roster, they could entertain this idea. However, there is no solid succession plan if Cousins is traded. Minnesota would need to use the draft resources they received in the trade package to draft a rookie quarterback. That’s risky business, especially considering Minnesota doesn’t have a viable plan at quarterback right now. More importantly, another team would need to be willing to take on Cousins’ big cap hits.

Instead, Minnesota should solidify the left guard position through the draft or free agency. Even though Cousins navigated high pressure rates all year, he still put together one of his most analytically sound seasons. Cousins faced the second-highest pressure percentage (27.6%) in the NFL this season. Despite that, he still finished No. 10 in EPA per play (0.213), per Ben Baldwin’s datasets. He also posted the eighth-best success rate (52.7%) and fifth-best completion percentage over expectation (4.6). He did an excellent job of maximizing his attempts within a run-first offense. Minnesota tallied the sixth-fewest passing attempts (516) in the NFL, but Cousins still thrived off play-action and downfield passing.

If Gary Kubiak indeed retires, the Vikings will be looking for a new offensive coordinator. Quarterbacks coach Klint Kubiak may be the top option to replace him. There is no doubt the Vikings want to maintain their outside zone scheme and play-action passing concepts. All of those things align with the strengths of Cousins and maximize his potential. If any offensive changes are made, Minnesota should try to increase its passing frequency. Wide receiver Justin Jefferson is a star and needs to be prominently featured in every game plan.

This year, Jefferson broke the NFL’s rookie record for receiving yardage (in the Super Bowl era) while playing in a low passing frequency offense. The Vikings need to take advantage of the fact they have two of the league’s most dynamic route runners. Wide receiver Adam Thielen finished 2020 with the second-most touchdowns inside the 20-yard line (13). He stressed defenses and continued to get open off extremely detailed routes. Running back Dalvin Cook is one of the league's best playmakers, but the Vikings also need to completely maximize the talents of Jefferson and Thielen.

The Vikings must focus on getting better up front on both sides of the ball. Many of their losses this season were a product of poor play in the trenches. Danielle Hunter, Michael Pierce, Anthony Barr and Eric Kendricks are all set to return, which will help the defense. Due to the top-heavy nature of this roster, the Vikings must focus on building defensive depth through the draft. It is also necessary to find starting-caliber players at 3-technique defensive tackle and safety (if Anthony Harris isn’t brought back). The team must also solidify the interior of the offensive line. It starts by adding a capable starting guard to the roster. Additionally, the Vikings need to build off of the scheme and find ways to increase their overall passing outputs.