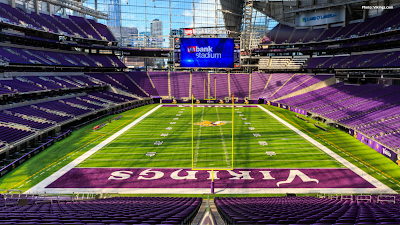 Photo: Vikings.com
The Vikings announced their initial 53-man roster on Saturday. Click below to see all of the roster moves!

The Vikings announced their initial 53-man roster on Saturday. Over the next couple of days, the front office will continue to monitor the waiver wire.

Right now, it is clear the team will claim a safety. Minnesota kept just two of them on the initial 53-man roster. There is a remote possibility Harrison Hand could play both positions. However, he may be a future practice squad candidate. Teams often place these type of players on the initial 53-man roster to limit their overall waiver wire exposure. This year, teams can now stash 16 players on the practice squad. This means coaches will have an opportunity to keep extra "upside options."

The Vikings have continued to work out a long list of players at both safety and linebacker. As teams make roster moves, several targets may become available at those positions.

Until then, here's a look at the current roster:

Analysis: The Vikings have valued Sean Mannion's football intelligence in the quarterback room. He is a key leader and has extensive knowledge of the system. Now, the biggest question is whether former Iowa quarterback Nate Stanley can make it to the practice squad. Stanley has a big arm and fits nicely in Minnesota's scheme. His background in a bootleg heavy, zone-scheme helped him translate to the Vikings' system. Stanley is someone Gary Kubiak can continue to develop.

Analysis: The Vikings have excellent depth at running back. I thought Ameer Abdullah may be released, especially since K.J. Osborn is likely the team's primary kick and punt returner. However, Abdullah has shown the ability to play multiple special teams positions.

Last year, fullback C.J. Ham played a major role in the Vikings' defensive scheme. He displayed his versatility and delivered key blocks in Minnesota's 21 and 22 personnel packages. Kubiak has to love the group of running backs he has to work with in 2020.

Analysis: Arguably the biggest surprise on this roster is Penn State undrafted rookie Dan Chisena. Chisena was a track athlete from 2016-18 and finished his career on the football team (2018-19). He had just three career catches in 14 games (two starts), but also made an impact on special teams. The Vikings recently moved Chisena to safety, but shifted him back to wide receiver. The Vikings were clearly impressed with his testing metrics, including a 4.32 40-yard dash. While playing special teams, Chisena captured the coaching staff's attention and earned a roster spot because of it.

I was wondering which wide receivers would earn the fifth or sixth spot. In the end, Chad Beebe beat out Alexander Hollins. Hollins has been developing over the past year and even saw time at the end of last season. During the early stages of his career, Beebe has battled injuries. Nonetheless, Minnesota's offensive coaches love his quickness and route-running ability out of the slot. Beebe ultimately provides a different type of skill set in the wide receiver room.

The Vikings signed wide receiver Tajaé Sharpe in free agency this year. While watching Sharpe's film, I was impressed with his footwork and releases. He won off a variety of different routes and stressed defenses in the red zone. Sharpe is an experienced pass catcher who can line up both outside and in the slot.

Finally, I'm excited to monitor the development of wide receiver K.J. Osborn. He has plenty of upside at the wide receiver position and is dynamic in space. For now, Osborn will make an impact on special teams. It sounds like he may end up being the team's primary kickoff and punt returner.

Analysis: This could be a breakout year for Irv Smith Jr. Offensive coordinator Gary Kubiak may feature him more in the offensive system. For example, Smith could flex out to create mismatches up the seam. The 22-year-old tight end is bursting with upside and may become a key weapon in the Vikings' offense.

Tyler Conklin displayed improved run blocking skills last year. I haven't had an opportunity to see him practice this year (no open training camp practices), but can't wait to see how much he has developed.

Analysis: Last week, Kubiak said he liked the depth Minnesota had in the offensive line room. The development of Oli Udoh is going to be fascinating to watch. Udoh has rare physical traits and is tuning up his footwork. He could possibly become the team's right tackle next season. Right now, Udoh is set to be a key depth piece at the tackle position.

Guard Dru Samia is getting another opportunity to work with the coaches. While seeing Samia practice/play last year, I felt like he needed quite a bit of technical polishing. Despite that, I thought he had quite a bit of upside. He was ultimately adjusting to the NFL and learning the system last year. Now, the Vikings may need him to play a reserve role in 2020.

Ezra Cleveland has been working at guard and needs to learn all of the technique. As I have noted before, Cleveland's athletic profile is extremely impressive. He may end up kicking back outside next year if the team parts ways with Reiff. For the time being, Cleveland is probably the team's first guard off the bench.

Analysis: The Vikings managed to pull off a trade for Yannick Ngakoue last Sunday. He is teaming up with Danielle Hunter to create a dynamic pass rushing duo. In a recent piece, I talked about the moves and versatility he will bring to the Vikings' defense.

The biggest question I have is how the interior of Minnesota's defensive line will hold up. Michael Pierce opted out, which drastically impacted the team's plans at nose tackle. Right now, Shamar Stephen is poised to be the opening day starter. The coaching staff has indicated he may actually fit better at nose tackle. After that, Armon Watts is probably the next option. He has the versatility to play between both 3-technique and nose tackle. As I've said numerous times, the Vikings' run defense is the biggest key in 2020.

Fans should closely monitor defensive end Eddie Yarbrough. Dating back to his college career at Wyoming, Yarbrough has been a very disruptive player. He showed flashes with Buffalo and was developing in Andre Patterson's defense. Yarbrough could end up being an underrated rotational option for the Vikings.

Overall, there aren't any surprises in this position group. Reports out of training camp indicated James Lynch was buried on the depth chart. He did make the initial 53-man roster, but may eventually end up on the practice squad. I wrote an in-depth breakdown on Lynch this spring. He needs to physically adjust to the NFL and may benefit from a redshirt year.

Analysis: The Vikings were trying out linebackers throughout training camp. They ultimately decided to sign Hardy Nickerson Jr. His father, Hardy Nickerson Sr., was a four-time All-Pro selection for the Tampa Bay Bucs (1990s). In college, Nickerson Jr. was an integral part of Illinois' defense. He also spent the past three seasons in Cincinnati with the Bengals.

Minnesota will likely use its initial priority claims on the safety position. However, if the Vikings want to upgrade their linebacker depth, they may look at the waiver wire. One potential fit stood out to me immediately. Seattle released linebacker Shaquem Griffin on Saturday. He has an intriguing athletic profile and could carve out a role in Mike Zimmer's creative sub packages. The Vikings attended Griffin's Pro Day and saw him work out with Mike Hughes in 2018.

At the Scouting Combine, he ran a 4.38 40-yard dash (99th percentile) at 6-foot, 227 pounds. I think his versatility may fit nicely in Zimmer's defensive scheme. Griffin's blitzing skills, straight line speed and range would provide depth on Minnesota's depth chart. Not only that, but he has extensive experience on special teams.

Analysis: The Vikings' cornerback depth chart might be young, but it is also filled with upside. Minnesota released undrafted rookie Nevelle Clarke and may try sliding him onto the practice squad. Last year, Clarke broke up 11 passes and grabbed two interceptions for Central Florida. He also played within a system that had the fifth-best defensive back havoc rate (11.4%) in the country, according to College Football Data. Clarke may need another year to develop, but has plenty of upside.

Harrison Hand, a fifth-round pick, has the versatility to potentially play both safety and cornerback. This may have helped him land a spot on the roster. Hand could end up sliding to the practice squad eventually. He tested very well, particularly in the broad and vertical jumps. Hand also has a long wingspan and is the type of player this coaching staff could develop.

The biggest key is finding a safety on the waiver wire. Currently, my favorite fit is Sean Davis. He was released by Washington on Sunday. The former second-round pick (2016) spent his first four seasons in Pittsburgh. He played both safety and nickel cornerback, which is an added bonus. Teams would need to assess his health, though. Davis has a history of shoulder problems, including a pair of surgeries in 2017 and 2019. Davis brought excellent range, length and testing metrics to the Steelers. Entering the NFL, he ranked in the 93rd percentile of the bench press (21 reps) and ran a 3.97 20-yard shuttle (89th percentile), according to MockDraftable. Davis started 41 games and would bring valuable experience to the Vikings' safety room.

Another name to monitor is safety Damarious Randall. He was released by the Raiders on Friday and previously worked with Vikings Senior Defensive Assistant Dom Capers in Green Bay.

Analysis: The Vikings finally have continuity at the specialist positions! This is so important, especially considering the pandemic limited spring contact.
Posted by Daniel House at 3:47 PM