Five Vikings Players Who Need To Step Up in 2020 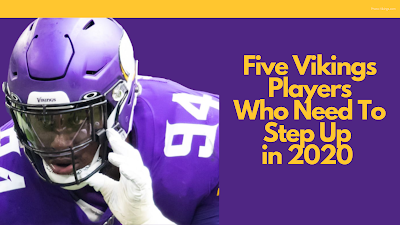 It is officially game week! Daniel House highlighted five Vikings players who need to step up in 2020.

The offseason looked very different, but NFL football is almost here. Without preseason games, it has been difficult to evaluate each team’s depth charts.

As the Vikings prepare for Sunday’s game against Green Bay, we know several new players are set to make a big difference in 2020. Minnesota will be asking many past reserves to play prominent roles this year.

Here is my list of five players who need to step up in 2020:

Defensive tackle Jaleel Johnson has a big opportunity. After Michael Pierce opted out of the 2020 season, Shamar Stephen slid over to nose tackle. This opened the door for Johnson to become the team's starting three-technique defensive tackle. During his first three seasons with the Vikings, Johnson has flipped between both nose tackle and three-technique. He is arguably one of the most important players on the entire roster in 2020.

Johnson has occasionally shown the ability to fire off the ball and one-gap penetrate. Coming out of Iowa, I was actually most impressed with Johnson’s pass rushing ability. He has also expanded his hand technique and uses those skills to fight through blocks. Johnson's skill set possibly translates better at the three-technique position. While going back through my 2017-19 training camp notes, I discovered many of his best reps occurred while playing there. Last year, Johnson rotated between three-technique and nose tackle. Now, he can finally focus on one specific role in 2020.

Mike Zimmer relies upon his three-technique to consistently attack a gap. If this player is disruptive and getting penetration, the entire defense gels. As I’ve noted in numerous pieces, Minnesota needs the interior to get push and stop the run. It simply fuels every other aspect of the defense.

Defensive tackle Shamar Stephen is sliding over to the nose tackle position in 2020. In this role, he is going to be taking on blocks and double teams. This allows linebackers to flow downhill and make plays against the run. Zimmer recently indicated Stephen may actually be a better fit at nose tackle.

The interior of Minnesota’s defensive line has to step up in 2020. Last year, there were quite a few instances where chunk running plays allowed opponents to sustain drives. Minnesota even made a free agent signing to help in this category.

The Vikings expected Michael Pierce to be the anchor inside, but plans quickly changed when he opted out of the 2020 season. Pierce was exactly what the Vikings needed at the nose tackle position. He played with excellent leverage, took on double teams and used his power to get interior penetration. Right now, we’re waiting to see whether Stephen can adequately fill this hole. There is a possibility Armon Watts could push him for playing time, too. Watts was ultra-productive in a limited role last season. He has the versatility to play both interior positions and also provides value as a pass rusher.

Over the first few games, I’ll be closely evaluating Stephen’s fit at nose tackle. He needs to play at a high level if the Vikings’ run defense is going to take a step forward.

Minnesota re-tooled its secondary by drafting several high upside rookies. The most experienced player in the cornerback room is Mike Hughes. The former first-round pick has battled injuries during his first two seasons with the Vikings. As a rookie, Hughes played in just six games before tearing his ACL. His 2019 season also ended in early January due to a neck injury. There is no doubt Hughes must stay healthy and contribute this year.

His ability to play both nickel and outside cornerback is a major asset. Hughes will be tasked with covering shifty, dynamic slot options every week. He also could kick outside occasionally to give rookie cornerback Jeff Gladney slot reps. When the Vikings are in the base 4-3 package, he may shift outside to play opposite of Holton Hill, too.

Hughes is a fluid mover/athlete and is continuing to develop his technique. He frequently made plays when he was on the field last year. The biggest question is whether he can complete a full 16-game slate.

Right now, outside of Hughes, the Vikings have a young secondary. When Minnesota is in the nickel package, either Cam Dantzler or Jeff Gladney will likely align outside.

Dantzler and Gladney both fit Zimmer’s system extremely well. Dantzler is a physical man coverage corner with excellent length. On the other hand, Gladney brings a bulldog mentality to the secondary. Vikings fans will love his aggressive playing style and ability to play on an island. The Vikings’ young cornerbacks may have some growing pains, but they will also make impressive plays, too. I’m excited to see how the cornerbacks transition to the league, especially considering they didn’t play any preseason games.

Dakota Dozier swooped in and grabbed the starting left guard job. Dozier joined the Vikings last year and started four games (three at right guard, one at left guard). He has the versatility to play all of the interior positions for Minnesota. Dozier certainly benefited from his past experience in run game coordinator/offensive line coach Rick Dennison’s system. Before joining Minnesota, the Vikings’ guard played two seasons for Dennison in New York. This background helped him quickly fit into Minnesota’s outside zone scheme. Zimmer has also noticed the strides Dozier made this offseason.

“I think he’s played with much more power than he has in the past. He’s a smart guy, he understands the scheme. He’s been with [Dennison] for three years now, so that helps,” Zimmer said Monday.

Minnesota’s interior was inconsistent last season, especially in pass protection. During his 2019 appearances, Dozier showed flashes in that specific category. The Vikings simply need him to be a serviceable player in 2020.

This offseason, the Vikings decided to move Pat Elflein to right guard. Elflein is actually returning to a position he is very familiar with. During his sophomore and junior seasons at Ohio State, Elflein started 25 games at right guard. The coaching staff is hopeful this past experience will help him find a groove in 2020.

After suffering shoulder and ankle injuries during the 2017 season, Elflein never really returned to form. He was one of the league’s best young centers before ankle and shoulder surgeries stunted his development. Last year, the Vikings decided to draft center Garrett Bradbury and shifted Elflein to left guard. He started 15 games, but never established any consistency. Elflein has the necessary movement skills to thrive in Minnesota’s outside zone scheme. His biggest issues have occurred in pass protection. If he ties up his technique and footwork, Elflein has all of the traits needed to contribute at right guard. We just don’t know if a position change will help him return to form.

Ultimately, the interior of Minnesota’s offensive line is filled with question marks. If the offense is going to reach its peak potential, Dozier and Elflein have to step up.