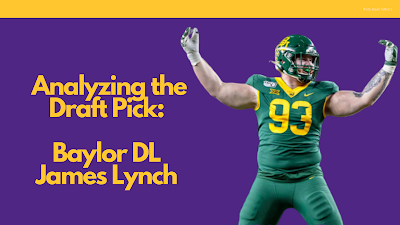 The Vikings selected Baylor defensive lineman James Lynch in the fourth round of the 2020 NFL Draft. Lynch was one of the most disruptive defensive players in the Big 12. Daniel House highlighted what he will bring to Minnesota.

The 3-technique defensive tackle position is an important aspect of Mike Zimmer’s defense. During his coaching career, we saw how Zimmer’s scheme was maximized with excellent 3-techniques like Geno Atkins and Sharrif Floyd. A one-gap penetrator featuring quickness, power and pass-rushing ability can change the entire system. Since Floyd, the Vikings have been trying to find a dominant and consistent player at the position.

The team re-signed Shamar Stephen last offseason and he is the very early favorite to start at 3-technique in 2020. Stephen was inconsistent last year and posted just 15 solo stops. In recent draft cycles, the Vikings have also selected prospects like Jaleel Johnson and Jalyn Holmes to possibly fill the 3-technique role. However, Johnson and Holmes have primarily been rotational players in Zimmer’s defense. Johnson has been utilized as both a nose tackle and three-technique, but Holmes may actually fit better at defensive end.

Out of college, Hercules Mata’afa converted to 3-technique and needed time to improve physically. Last year, the Vikings also selected Armon Watts, who showed flashes in his rookie season. He can play between alignments and was productive both as a run defender and pass rusher. Each one of these players has a certain strength, but the Vikings are still searching for a complete 3-technique. Out of all the above candidates, Watts might have the most upside. The coaches may view him as more of a nose tackle, though.

This year, Minnesota again selected another 3-technique defensive tackle in the fourth round of the 2020 NFL Draft. Last season, Baylor defensive lineman James Lynch was named Big 12 Defensive Player of the Year and became the school’s all-time career sacks leader (22). Lynch was one of the most disruptive defensive line prospects in the entire country. In 2019, he posted a whopping 19.5 tackles-for-loss and 13.5 sacks. Lynch played defensive end at Baylor, but occasionally kicked inside. With the Vikings, he is expected to be a versatile 3-technique, who can shift outside occasionally.

While watching his live games and film, I was so impressed with how hard he plays. There is never a moment where he takes a snap off. When his initial rush is possibly shut down, he frequently retraces the quarterback and finishes the sequence. In these situations, Lynch often utilizes a spin move, pulls off the block and chases down the quarterback. Within the clips below, you'll also see his flashes of potential against the run. Pay attention to how he takes a quick first step, gets position and creates interior penetration.

I've been taking another look through James Lynch's film. He has a quick first step, plays with excellent leverage and can dip/bend around the corner.

He's very disruptive and occasionally commanded chips/double teams. I'm excited to see him kick inside with the #Vikings. pic.twitter.com/LfzMezMdgU
— Daniel House (@DanielHouseNFL) May 7, 2020


His power and ability to gain leverage are two of his best traits. Lynch is very quick and strong, which makes him difficult for an offensive lineman to mirror. He doesn’t have tremendous length (31 7/8-inch arms - seventh percentile), but his power, quick hands and natural feel for leverage allow him to muscle through blocks. He also has the instincts to occasionally set up a second move. Another top aspect of Lynch’s game is how he can quickly take his first step, gain leverage and slide between gaps. The clip below is one of the reasons why I’m intrigued about him kicking inside and playing a gap. He has an excellent combination of power and flexibility to get position and slide between tight creases.

As a pass rusher, he has shown the ability to bend and dip around the corner. Lynch has excellent flexibility and lower body strength. Not only that, but he displays a natural feel for when to deploy a spin move or set up his rush inside.


There are reps where he shows off the bend and quickness, but a high volume of his moves feature power and excellent leverage/position. This rush against Georgia shows you the type of power he can generate:

With new nose tackle Michael Pierce taking up space and commanding double teams, Lynch could receive a high volume of 1-on-1 matchups. When considering his high pass-rushing productivity and methodical playing style, the idea of him being freed up is intriguing. Lynch primarily played defensive end in college, but might fit better playing one gap. There were quite a few instances where he was getting doubled or chipped on the perimeter in college, including games against Texas Tech, Kansas State, Oklahoma and Georgia.

At 3-technique, he likely won’t face as many double teams due to the alignment itself. When this occasionally occurs, another player on the defensive line will benefit from the attention he is receiving. If the Vikings can find a consistent 3-technique defensive tackle, it could change the entire defense, including the team’s pass rush matchups and ability to free up linebackers.

The physicality is going to increase in the NFL, so Lynch has to be ready for the jump. I want to see how he handles that transition. He doesn’t have a staggering athletic profile in several categories, including the 40-yard dash (5.01s) and vertical jump (29 inches), according to MockDraftable. Lynch’s testing profile doesn’t feature elite-level explosiveness, either. However, his agility metrics, including the shuttle (4.39s - 70th percentile) and 3-Cone (7.39s - 50th percentile) are strengths within his skill set. His full metrics are listed below, courtesy of MockDraftable. 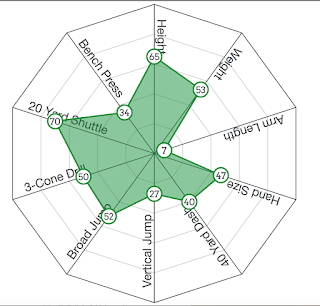 As I mentioned above, Lynch also has limitations associated with his length, so the technical components of his game are going to be extra important. He needs to use his quickness, power and hands to win consistently.

There are a few moments on tape where he over pursues and runs himself out of plays. He’s always firing on all cylinders, which sometimes causes him to lose contain or his angle to the ball carrier.

Lynch also doesn’t have a plethora of experience playing inside. He showed flashes, especially when standing up in the interior. Within third-down rushing packages, I believe his quickness will allow him to thrive off stunts. His lateral speed and agility can be utilized in that role.

However, the biggest question is: will length limitations impact Lynch's ability to get inside position, extend and shed against NFL physicality? He needs to fight and muscle through blocks to make a difference against the run. Lynch certainly has the power and displayed these skills frequently, especially in his Oklahoma film above. Like I said earlier, his quickness, power, hand technique (can master with defensive line coach Andre Patterson) and feel for leverage are going to be key components as he transitions to the NFL.

Lynch doesn’t have a dazzling athletic profile, but his production is impressive. Normally, the Vikings are looking for “high ceiling" defensive line prospects with above average length and explosiveness metrics. The coaching staff then maximizes all of their untapped potential. Lynch isn’t a standout performer in those categories, but was extremely disruptive in college. When factoring in his strengths and college production, Lynch is a prospect defensive line coach Andre Patterson could quickly take to another level.

The biggest question is whether he can move inside and handle the physical leap. If Lynch does, the Vikings may have found a versatile 3-technique for this defense.

Video Credit: ESPN. The videos above are used for educational purposes (fair use).
Posted by Daniel House at 3:13 PM