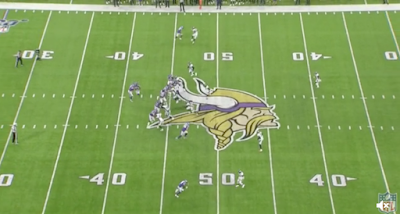 Entering Sunday's game, NFL teams were a combined 0-99 when trailing by 20 or more points at halftime. Despite falling into a quick 20-0 hole, the Vikings managed to accomplish something that has now occurred only once in the past five seasons.

Minnesota pulled off a 27-23 comeback victory after trailing by 20 points at halftime. In the first half, the Vikings' offense struggled to sustain drives and push the ball vertically. Over the final 30 minutes, Minnesota used tempo, bootlegs, play-action and vertical concepts to get into a rhythm. Offensive coordinator Kevin Stefanski put quarterback Kirk Cousins in the shotgun and adapted parts of the system. The Vikings scored on every single fourth quarter possession and completed a massive defensive stand as time expired.

All year, quarterback Kirk Cousins has thrived off boots and play-action. Minnesota used this to fuel a 54-yard touchdown to Stefon Diggs. As I wrote in a previous article, a key part of these bootleg concepts is the deep over route. Diggs runs the route and beats cornerback Chris Harris Jr. Cousins had the option of Rudolph running the crosser, Conklin in the flat or Bisi Johnson stretching vertically. The single-high safety (Kareem Jackson) is playing the deep middle and is slightly drawn to Johnson’s route. Safety Justin Simmons handles Irv Smith Jr.’s crosser.

Cousins rolls to his left and the entire second-level of the defense bites and freezes off the play-fake. Again, Kirk Cousins made another tremendous throw off a bootleg to his left. After the game, Cousins said Diggs was actually the fourth read on this play. It tells you how difficult it is to complete a throw like this. Kirk is on the move, rolling to his left and has to set his feet to make an accurate deep throw. The 54-yard touchdown kept the Vikings’ offense surge going. Minnesota scored on every single fourth quarter possession to lead the improbable comeback.

Prior to this big play, one of the most underrated moments occurred late in the third quarter. Minnesota trailed 23-7 and faced third-and-14 from its own 32-yard-line. The Broncos are in deep zone coverage and the Vikings attacked with two routes over the middle. It looked like a small variation of Y-Cross, except it was out of a 2x1 formation. In this instance, inside linebacker Todd Davis bites on running back Dalvin Cook’s route and Cousins does a nice job of moving the linebackers and safeties with his eyes. The receivers have several reads to make and it's based upon how the safeties and linebackers are playing them in the zones. In this instance, Irv Smith Jr. reads safety Justin Simmons and snaps off the post. Kirk Cousins fired this pass over the middle to tight end Tyler Conklin, who made a brilliant adjustment. It perfectly attacked a hole within the Broncos’ zone coverage. Cousins had to get this ball out quick and made a very swift decision to attack the soft spot. If the Vikings didn’t get a first down with 1:50 remaining in the third quarter, it would have changed the entire outlook of the game. This play was well designed and executed by everyone involved.

On Minnesota’s final 32-yard touchdown to tight end Kyle Rudolph, the coaches dialed up another bootleg concept. I talked about this play during my Detroit Lions breakdown a few weeks ago. The Broncos again have single-high coverage and cornerback Chris Harris Jr. bites on Stefon Diggs’ post. This vacates the left side of the field and tight end Kyle Rudolph has plenty of space to make a play after the catch. The use of play-action causes the second-level of Denver’s defense to bite.

Quarterback Kirk Cousins was again dynamite while booting to his left. Offensive coordinator Kevin Stefanski appeared to dial up a variation of the classic Yankee Concept, which is a route combination out of the Shanahan family playbook. The Vikings used a similar look (out of a different personnel group) with tight end Irv Smith Jr. against Detroit.

During the play against Denver, the safety (Kareem Jackson) is threatened by Diggs’ deep post. The goal of this play is to draw away the safety and outside cornerback. The concept naturally clears space over the middle for a tight end. Again, this was another well-designed play that was executed to perfection.

Kirk Cousins thrives off the bootlegs, but more importantly, he is making extremely quick decisions. He is processing fast and getting the ball to the right spot. During many of the instances where he is tasked with making the most difficult throw, he has shown enough confidence to let it rip. I pulled out five of his best throws off bootlegs. All of them happened to result in touchdowns:

Kirk Cousins has always been dynamite off bootlegs. The #Vikings are doing an excellent job of mixing in boots and play-action to help Cousins thrive. The five plays I chose all resulted in touchdowns. Some of these throws...👀 pic.twitter.com/UedSeBQOEi
— Daniel House (@DanielHouseNFL) November 21, 2019


If Cousins can continue to play at this level, the Vikings will be a legitimate threat in January. Now, it’s all about establishing consistency and eliminating occasional moments where the offense is less productive.

I would also like to see the Vikings use tempo more frequently. Even when they’ve trailed late in games, it’s easy to notice the rhythm no-huddle situations have provided. With Minnesota facing such a big deficit, it was necessary to play with urgency. I’m not saying they need to use it all the time, but mixing tempo into the gameplan could be effective. For example, after a successful fourth-and-short conversion in the third quarter, the Vikings quickly used no-huddle. On the next play, Kirk Cousins connected deep with wide receiver Stefon Diggs for 44 yards.


The defense didn’t have much time to get set and Minnesota caught the Broncos’ defense in limbo. Cousins is very productive when he gets into a rhythm. We will see if the Vikings’ coaching staff is willing to try this more frequently over the final five games. It’s also been particularly noteworthy how much the staff has incorporated all of the tight ends into the gameplan. With Adam Thielen injured, Stefanski has heavily featured a mix of Kyle Rudolph, Irv Smith Jr., and most recently, Tyler Conklin. All three of those players contributed to Sunday’s comeback win.

Overall, I was quite impressed with the adjustments offensive coordinator Kevin Stefanski made. It is apparent how much of an influence the entire staff has, including assistant head coach Gary Kubiak. During his media availability, Kubiak told reporters that the communication has continued to improve and evolve every week. Now, after having a bye week to self-scout, it will be interesting to see any additional adjustments that are made.

One area of emphasis during the week bye week will revolve around tuning up technique in the secondary. Over the past few weeks, Minnesota's defensive backs were sometimes in position, but couldn't make the big play. Occasionally, it comes down to swiveling your head or managing to get a hand in the passing lane. During Sunday's game, there were two plays where this was the case. Another instance that comes to mind was the deep throw to Tyreek Hill against Trae Waynes in the Kansas City game.

I've been diving into the #Vikings-Broncos All-22. Over the past few weeks, one thing that continues to stand out: the cornerbacks are in position, but can't quite finish the play. This is an area they can tune up over the bye week. pic.twitter.com/wZlA8Hnp3e
— Daniel House (@DanielHouseNFL) November 21, 2019


If anyone can find a way to tighten up the pass defense, it’s head coach Mike Zimmer and defensive backs coach Jerry Gray. Minnesota’s front-seven continues to create pressure, so if the secondary can return to form, the Vikings will cause plenty of trouble for future opponents.