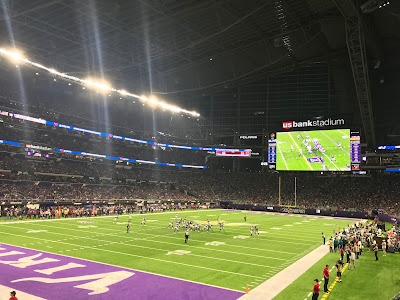 With both teams directly in the NFC playoff picture, Monday night's game between the Vikings and Seahawks has major implications. For Minnesota, this matchup could be a defining moment of the 2019 season. Find out why!

After a 15-day break, it’s finally time for the Vikings to begin a critical playoff push. Monday night's game is one of the biggest matchups of the 2019 season. The Seahawks and Vikings are directly in the hunt for division titles and playoff spots. With a road win over Seattle, Minnesota would stay in contention for a high seed and NFC North title. If the Seahawks win, they can continue to put pressure on the 49ers, while keeping pace in the race for home-field advantage. The result of this game will have a dramatic effect on NFC playoff seeding.

Last week, Minnesota used a bye to get healthy and self-scout. With five games remaining, everything is still in front of the Vikings. They are set to host three divisional games at U.S. Bank Stadium, including a key matchup against the Green Bay Packers on Dec. 23. If Minnesota beats Seattle, the path to a division title and first-round bye is much clearer. There is no doubt Monday night’s game will be a defining moment in the Vikings’ season.

Following the bye week, Minnesota’s offense needs to continue showing consistency. When this group is at its best, they are using play-action and bootlegs to move the pocket. Quarterback Kirk Cousins has been playing more confidently because the system is maximizing his potential. After Thursday’s Thanksgiving games, Kirk Cousins moved into the top spot of Ben Baldwin’s Quarterback DAKOTA Ratings. This rating system includes predictive EPA/play and completion percentage over expected composite. Cousins posted a 0.22 metric, which ranks ahead of Lamar Jackson, Drew Brees and Russell Wilson. Since Week 5, Cousins has found a groove and is thriving off play-action.

Now, the Vikings’ offense has to take another step forward. There have been several games throughout the season where the offense has struggled to establish a rhythm. The ball has to get out quick through play-action or short-step drops. When this team is successful, they run the ball, use intermediate route concepts/quick passing and eventually take deep shots downfield. If you have success on early downs, there is more flexibility to push the ball vertically. When the Vikings face deficits, they use more deep drops. If Minnesota grabs an early lead and gets into a groove, the entire outlook seems to shift. As I’ve noted before, the Vikings should continue to blend in pace and no-huddle to help the overall offensive rhythm.

Wide receiver Adam Thielen (hamstring) has been ruled out for Monday’s game, so the Vikings will need to keep utilizing the tight ends. Recently, the offensive staff has done a tremendous job of capitalizing upon the skills of Kyle Rudolph and Irv Smith Jr.. During the team’s dramatic 27-23 win over Denver, all three tight ends had key plays. Tyler Conklin made a critical third-down catch, Smith Jr. had a red zone score and Rudolph grabbed his fifth touchdown in five games. Within this system, there are a variety of wrinkles that can be used to take advantage of tight end skill sets. I don’t think we’ve witnessed all of the possibilities yet. With Thielen out, the Vikings need to continue rolling out packages for each of these players.

Throughout the year, Minnesota’s rushing attack has helped place them in manageable late-down situations. The Vikings are running the football at a 50 percent clip, which is the third-highest rate in the NFL. Running back Dalvin Cook has been dynamic and his versatility is making a mark on the offense. The Vikings’ usage and execution of screen passes has been one of the most underrated aspects of the offense. Those plays have been deployed at the right moments and help take advantage of aggressive defensive schemes. Cook is so hard to bring down in space because of his footwork, acceleration and sharp cutbacks. When he gets a high volume of touches, his potential is maximized. The Vikings’ outside zone rushing scheme has helped place Cook in the best possible situations. All of the cutback lanes and creases allow him to create explosive plays. Minnesota currently has the fourth-best explosive run rate average (13%), according to Sharp Football. The Vikings’ overall offensive balance has allowed Kevin Stefanski and Gary Kubiak to attack teams with a variety of creative wrinkles. Now, we’ll see if the coaches can continue to build upon all of the play-action, bootlegs and quick passing concepts that have been so successful recently.

Tightening up the pass defense

Seahawks quarterback Russell Wilson is having another MVP-caliber season. On Monday night, the Vikings’ defensive line has to play a very disciplined game. If you lose edge contain or struggle to maintain pass-rushing lanes, Wilson will make you pay. His ability to extend plays and move in the pocket puts a strain on defensive backs covering downfield.

This season, Wilson has tossed 19 touchdowns and just one interception in the red zone. He also ranks No. 2 in passer rating and No. 3 in completion percentage above expectation, according to NFL Next-Gen Stats. Wilson is playing extremely efficient and very few quarterbacks are pushing the ball downfield more than him. He ranks third in average intended air yards (9.6) and fourth in completed air yards (7.2), per Next-Gen Stats. The Seahawks’ offense loves to push the ball vertically, which means the Vikings’ defensive backs will need to play with excellent technique.

Recently, Minnesota has allowed a large volume of explosive passing plays. The Vikings’ pass defense is tied for the seventh-worst explosive passing play rate (9%), according to Sharp Football. Conversely, the Seahawks’ offense is tied for third in average explosive passing play rate (11%). This year, there have been many situations where the Vikings’ defensive backs have been in position, but can’t make a play on the ball. Head coach Mike Zimmer and defensive backs coach Jerry Gray had a week to polish technique and make tweaks. I’m curious to see the differences we notice in the secondary. Zimmer indicated the entire team spent time focusing on fundamentals during the bye week.

“I think it gave us another chance to sit back and reevaluate and get back to some fundamental things that kind of slip and get away when you’re game planning for somebody each week and next week and on a short week,” Zimmer said last week. “You’re concentrating so much on the other team you don’t concentrate on your own team quite as much, so I think it gave us an opportunity to do some of those things as well.”

Matchup of the Game

During this matchup, I’ll be keeping my eyes on the Seahawks’ offensive line. Seattle has the eleventh-worst adjusted sack rate (7.9%) in the league, according to Football Outsiders. The season-ending injury to center Justin Britt has played a big role in recent issues. Backup center Joey Hunt has been getting pushed around and it’s led to collapsed pockets. Vikings defensive tackle Linval Joseph is questionable (knee) and may return this week. If he does play, the matchup between Joseph and Hunt is one to monitor closely. If Minnesota gets interior pressure, it will be critical to hold the edge and prevent Russell Wilson from extending plays downfield.