The Vikings have quietly developed a secret weapon on the defensive line. Former seventh-round pick Ifeadi Odenigbo is emerging and Daniel House explained why!

When NFL teams are building a roster, the most important additions often involve rotational players.

While GM Rick Spielman and his scouts evaluate draft prospects, they are looking for versatile players with tremendous upside. Minnesota's coaching staff can take athletes featuring strong testing metics and develop them into future starters. When players arrive, the coaches teach the system and techniques. After mastering the details and learning specific roles, Mike Zimmer often inserts young players into rotational roles.

Very few coaches in the league have a better track record of identifying and developing talent than Minnesota defensive line coach Andre Patterson. During every draft cycle, the Vikings always find a defensive lineman with unique traits and upside. Patterson often develops the player and they eventually start to see rotational action on third-down.

In 2017, Minnesota selected Northwestern defensive lineman Ifeadi Odenigbo in the seventh-round. When evaluating his college tape, Odenigbo displayed tremendous power and leverage in the trenches. When looking at his testing chart from MockDraftable, we all noticed his broad jump, short range quickness and speed. He didn't possess the length traits, but Odenigbo's skill set featured above average lower body explosiveness. In the chart below, the numbers indicate Odenigbo's percentile ranking in each testing metic: 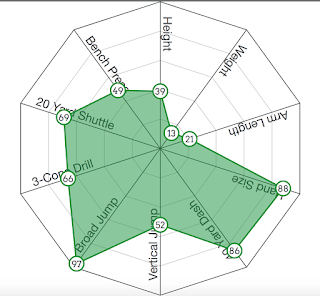 After watching him during training camp and the preseason, it was clear Odenigbo had the skills to develop under Andre Patterson and assistant defensive line coach Rob Rodriguez. He simply needed to continue improving his strength and technique.

In 2017, Odenigbo spent time on the Vikings' practice squad before being released during 2018 roster cuts. After performing well in the preseason, Odenigbo was claimed off waivers by the Cleveland Browns. A few weeks later, the Browns released him and he signed with the Arizona Cardinals. Odenigbo spent a month in Tempe before rejoining the Vikings' practice squad on October 31, 2018.

Minnesota initially had Odenigbo playing defensive tackle, but started to explore using him at defensive end. With his size, power and ability to bend, coaches saw the potential for him to play multiple alignments on the defensive line. He slowly started to show progress and turned the corner this offseason. In training camp, Mike Zimmer began to notice all of Ifeadi's offseason work.

"Number one, he worked really, extremely hard in the offseason and I remember toward the end of last season when he was on the scout team, he was making those guys on the other side of the ball work really, really hard," head coach Mike Zimmer said in early October. "He worked real hard in the offseason, kept getting stronger and more athletic. He came in here with a purpose of he was going to make this team and try to help us win. He’s done a nice job."

During training camp, Odenigbo was winning reps against top competition and thrived in 1-on-1 drills. After watching every practice, it was easy to see Ifeadi becoming consistent and disruptive. Odenigbo carried all of the momentum over to preseason games and quietly showed he was ready for more snaps. The Vikings' defensive lineman experienced what life is like for an NFL player on the fringe of earning a roster spot. However, he kept improving and managed to earn a spot on the Vikings' 53-man roster.

Now, Odenigbo has become one of Minnesota's secret weapons. Mike Zimmer and the defensive staff have been rotating him into the third-down nickel pass-rushing packages. The Vikings have occasionally deployed a NASCAR look with Danielle Hunter, Ifeadi Odenigbo, Stephen Weatherly, Everson Griffen and Anthony Barr. In the Kansas City game, Mike Zimmer sent a critical blitz where he deployed this personnel grouping. Odenigbo lined up at nose tackle, while Barr and Griffen rushed off the edge. Stephen Weatherly and Danielle Hunter kicked inside to the three-technique alignment. While all of this was going on up front, Zimmer disguised Double A-gap pressure with Harrison Smith and Eric Kendricks. Smith burst into the backfield and sacked quarterback Matt Moore.

The #Vikings disguise looks and send pressure on a dime. Zimmer dialed it up late in the game. I like the alignment tweaks they've made on the DL. Barr/Griffen align on the edge, Hunter/Weatherly kick inside and Ifeadi lines up at nose. Smith/Kendricks blitzed up the A gaps. pic.twitter.com/3z99BdrtOE
— Daniel House (@DanielHouseNFL) November 6, 2019

Odenigbo has been on the field for only 141 of Minnesota's total defensive snaps (23.6 percent), according to Football Outsiders. Even in a low sample size, Ifeadi has been very impactful. In nine total games, Odenigbo has posted three sacks, including quarterback takedowns in back-to-back weeks. He plays a variety of different alignments, including zero, three, five and nine techniques. This versatility has been a major part of the Vikings' defense. In the clip below, Odenigbo is aligned at defensive end and creates a quarterback pressure. He bull rushed and bent around the corner to collapse the pocket. Defensive tackle Jaleel Johnson pulled off his block and got credit for a sack. This rep is an example of Odenigbo's exceptional power and effort:

Odenigbo again aligned at defensive end and tossed left tackle Cam Erving sideways. When he engages with offensive tackles, Ifeadi plays with strong hands, placement and leverage. Every snap where Odenigbo is on the field, he elevates the defense's energy. A physical play like this displays the overall strength he's added to his skill set:

In 17 defensive snaps against Kansas City, Odenigbo made a clear impact on five plays. Later in the game, Ifeadi lined up over the nose and blew through a half-hearted double-team. The center was getting distracted because Mike Zimmer dialed up a stunt on the opposite side of the formation. Stephen Weatherly took three steps downfield and Everson Griffen looped inside. Austin Reiter tried to pick it up and Odenigbo bull-rushed right through the center and guard for a sack. The power, speed and lower body explosiveness of Odenigbo allow him to frequently win the leverage battle inside.

Since Minnesota's Week 5 win over the Giants, Ifeadi Odenigbo's role has continued to evolve. The Vikings' defensive staff has deployed Odenigbo in the pass-rushing packages more frequently. Dating back to early October, he's averaging 17.8 snaps per game. He's made the most of those reps and is bringing fresh energy to the field. Mike Zimmer said the coaches slowly introduced Odenigbo to different roles, but have started to take advantage of his versatility.

"Well, he kind of came on at the end of last year a little bit, on the practice squad, and we noticed it. He’s a very violent rusher, plays with a lot of strength and toughness," head coach Mike Zimmer said Wednesday. "So initially we wanted to look at him inside at nickel a little bit, then we moved him to end, and we felt like it was just too much at that point in time to do really two jobs. So we backed him down a little bit, and now we’re starting to use him in a couple different things now.

In the clip below, the Vikings again ran a stunt and Odenigbo picked up a sack. These stunts are tough for offensive line units to handle because they have to pick up the looper inside. When this happens, Odenigbo often gets a 1-on-1 matchup. In the rep below, I was particularly impressed with Odenigbo's ability to get low and bend through the center.

The next two plays below are examples of Odenigbo's effort and intensity. Even when he might be held up by a blocker, Ifeadi will disengage and retrace the quarterback. He never quits on the play and has enough speed to run down playmakers in space. Odenigbo has no trouble pulling off blockers and using his strong hands to shed. The quarterback scramble and screen below were beautifully traced by Ifeadi:

As noted above, the Vikings continually deploy stunts when Odenigbo is on the field. In the clip below, he is specifically part of the stunt. He was in charge of crashing and moving downfield. Ifeadi drew a double-team from the left tackle and guard. When this happened, the left guard did an excellent job of adjusting his pass set and picking up the looper (Everson Griffen). Eagles quarterback Carson Wentz escaped the pocket, but Odenigbo managed to shed the block and ran him down. The closing speed by Odenigbo allowed him to create a pressure and tipped pass. When Ifeadi is on the field, his engine never seems to turn off. This intensity is clearly felt throughout the entire defense.

Finally, during the Thursday night game, Odenigbo was aligned at three-technique. It looks like Washington made a pre-snap protection adjustment. Ifeadi blew off the snap and got left tackle Donald Penn leaning. He drove Penn backward and was held turning the corner. Despite that, he again closed and sacked quarterback Dwayne Haskins Jr. The combination of speed and power are always on display if Odenigbo receives a 1-on-1 matchup.

When the Vikings are selecting prospects, Ifeadi Odenigbo is the exact type of late-round player they love to develop. Odenigbo possessed intriguing athletic traits, above average intelligence and a very strong work ethic. The young defensive lineman had to fight for a roster spot, but never quit.
Now, Odenigbo is quietly becoming a secret weapon in the Vikings' defense.