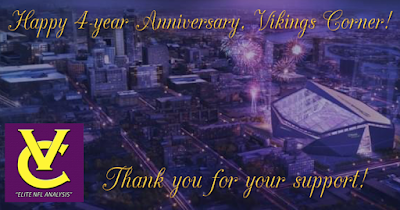 Vikings Corner turns 4 years old today and Daniel House shares the story of his website from its beginning days.

At the time, I was a young 15-year-old who had a goal. I wanted to write and share stories about the Minnesota Vikings on a website. After encouragement from teachers in high school, I decided to create a website during the summer of my freshman year. I didn’t exactly know where this website would take me. With hard work, the support of readers, and an attention to detail, I made Vikings Corner bigger than I ever envisioned. I’ve covered events, interviewed players, and talked with a countless number of personnel across the NFL. Three years later, I would decide to pursue a journalism degree at the University of Minnesota. Vikings Corner and the experiences I had confirmed this is the career I would like to have in the future.

At first, it was just a way for me to share my analysis and ideas with family and friends. I continually worked to improve my writing skills and extended my reach on Twitter. I connected with thousands of fans and Vikings Corner quickly became a community. I realized that my writing could not just touch those I knew, but it had the chance to extend globally into thousands of homes. I covered the team at training camp as a credentialed media member for two days as a 15-year-old. I rubbed elbows with some elite sports writers and interviewed Vikings players. At that moment, I instantly knew sports journalism was the career path I wanted to take. I can’t thank the Minnesota Vikings enough for believing in a young man who had limited experience. They never looked at me any differently and gave me the opportunity to pursue my dream. After that first year in Mankato, I was back for the next three. Every year my coverage grew and I spent more time at training camp. I provided coverage to all of you, while having the chance to improve my craft. Those days are certainly moments I’m thankful for and won’t forget for the rest of my life.

I have done features with prospects from the Priority Sports agency, interviewed a countless number of Vikings players, partnered with team foundations, and worked to promote a 30-for-30 series with ESPN. Not to mention, I covered the NFL Draft at Winter Park this year. In the last four years, I had so many opportunities because of your continued interest in my content. I work every day to provide you with the best possible analysis and stories about your favorite team. I can’t thank you enough for your interest in these posts. What’s more, it’s important to thank anyone who has helped make this website a reality, including all of the mentors who have given me advice along the way. I've had so many conversations with writers who provided me with words of encouragement and it is impossible to thank all of you at once. You know who you are. Your advice definitely played a role in making this day a reality.

I can’t wait to continue my work as training camp begins next month. I’ll have the same coverage you are accustomed to, but developed new ideas to make my content even better.

Again, thank you for fueling my passion at such a young age. All of you have made a subtle impact on my growth. It’s hard to believe it has already been four years. So much has changed in that period of time!

This is only the beginning and I look forward to continuing our interactions in the future.

P.S.: I have compiled some of my favorite stories below from the history of Vikings Corner for your reading pleasure!