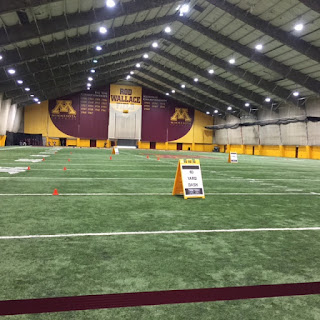 The University of Minnesota hosted their annual pro day in front of over 28 NFL scouts who were evaluating the local talent in the area. Daniel House was in attendance and recaps all of the action from the workout. 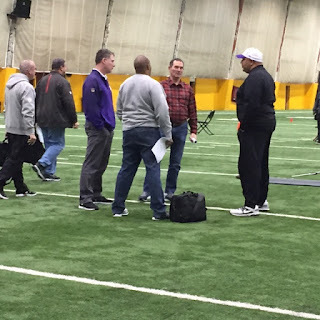 The University of Minnesota hosted their annual pro-day in front of over 28 NFL scouts who were evaluating the local talent in the area. Golden Gophers Eric Murray, Briean Boddy-Calhoun, De'Vondre Campbell, K.J. Maye, and Peter Mortell highlighted the athletes who participated. In addition to players from the University of Minnesota, athletes from Augsburg, Augustana, Macalester, Minnesota State-Mankato, and North Dakota rounded out the small schools. Additionally, the Vikings brought over 15 staff members to the practice including GM Rick Spielman, head coach Mike Zimmer, and assistants Pat Shurmur, Hank Fraley, George Stewart, Mike Priefer, Adam Zimmer, Andre Patterson, Jerry Gray, Kevin Stefanski, George Edwards, Jonathan Gannon, and
Robert Rodriquez. The amount of scouts in attendance at this pro-day rose from 17 last year, to 28.

The players went through the 40-yard dash and the field of players was narrowed from roughly 40 to 24. Those who remained went through the broad/vertical jump, 20-yard shuttle, and individual positon drills. Several of the University of Minnesota players, including Eric Murray, Briean Boddy-Calhoun, and De'Vondre Campbell participated in field workouts, but didn’t run the 40-yard dash. Each of them were already pleased with the times they posted at the NFL Scouting Combine two weeks ago.

Maye is a full participant
Gophers wide receiver K.J. Maye was a full participant in all of the drills. He ran a 4.55 40-yard dash, and coupled that with a 33” vertical jump. Maye ran routes during a drill by Vikings wide receiver coach George Stewart. The workout tested his footwork off the line of scrimmage. He didn’t drop many passes, but his small size (5’10”), coupled with his average speed will likely cause him to go undrafted. However, that leaves him with plenty of flexibility as he searches for a team in need of a slot wide receiver.

Campbell does some DL drills, loves Mike Zimmer
Gophers linebacker De’Vondre Campbell looks the part as he boasts his 6’5”, 240-pound frame. He certainly has plenty of versatility and even took part in some of the defensive line drills today. His footwork was really good, but he didn’t have that quick burst coming out of break. In fact, Mike Zimmer repeatedly voiced that to him during the positional drills. However, he is a project that could be developed with the right coaching. When asked about potentially joining the Vikings, he really liked the idea of being coached by Mike Zimmer.

“He’s the man, so you want to listen to him. I wouldn’t mind playing for him. He’s a great coach. I love what he is doing over there with the Vikings. You just take coaching from someone like that because you know he knows what he is talking about,” said Campbell.

Campbell decided to participate in defensive line drills as he has been working with a pass rushing specialist leading up to the draft. He sees himself fitting into a 3-4 defense, but wants his athleticism to be used in any way at the next level.

“That’s my prototypical defense. A 3-4 outside backer that can rush the passer, drop into coverage, do everything I’ve done here, plus more.”

Campbell is drawing plenty of interest from NFL teams and many of them took time to speak with him after the workout. He said that between the scouting combine and the pro-day, he has talked to almost all of the teams in the league.

“I talked to just about every team except maybe two or three. There are some teams I talked to more than others, some teams that showed more interest,” Campbell stated.

Boddy-Calhoun feeling healthy
Gophers cornerback Briean Boddy-Calhoun spent most of his senior season battling injuries, but as the season progressed, he started to feel closer to 100%. Boddy-Calhoun has nine career Big Ten interceptions, but he knows where he needs to improve as he ventures towards a role in the NFL.

“Getting in and out of breaks. Lowering my hips and being explosive out of my breaks,” Boddy-Calhoun said.

The verbiage “DB U” has been flashed during much of Boddy-Calhoun’s career and he attributes this to his work with defensive backs coach Jay Sawvel, along with the complex gameplans of now-head coach Tracy Claeys.

Calhoun hopes to join the list of recently drafted defensive backs from the University of Minnesota. In fact, he thinks he can compete with cornerbacks who currently strap on the shoulder pads in the NFL.

"I watched college film with friends and I said let's change it to watching NFL film, so we'd watch film and I'd say I think I'm a little better than him. That's when we truly believed we can play at the next level," Boddy-Calhoun said.

Murray knows where to improve
Gophers Cornerback Eric Murray was one of the most durable players Minnesota had during a tumultuous 2015 campaign. He started 39 straight games and never missed a practice during his collegiate career. Murray sees this as a selling point to NFL teams as he enters the draft. He credited sleep and eating healthy for his ability to remain on the field.

“I started to get more knowledge about the stuff I eat and how it gives you energy,” Murray said.

Eric Murray felt his performance in February’s NFL Scouting Combine did enough for him to show his strengths to NFL front office members. However, he knows the areas he must improve moving forward.

“I thought my performance at the combine went well. It was a real fun experience. I thought today went well too -- looked good in my drills. I have some stuff to work on – got some feedback from the coaches – it’s all a process,” Murray explained.

The biggest weakness that was noticed with Murray was his stiff hips as he came out of breaks. He needs to become more fluid as he changes direction. He didn’t have issues catching passes, but he stumbled on multiple occasions as he backpedaled. Murray said he received feedback from NFL coaches and has plenty to improve upon as he prepares for the NFL Draft on April 28th.

“Just dropping my hips when I’m coming out of breaks,” stated Murray. “Backpedaling is not a natural motion that everybody does. You walk forward every day, so I’m just working on it and making it a part of me.”

Mortell works out with Mike Priefer
The unseasonably warm temperatures allowed Gophers punter Peter Mortell to work outside the Gibson-Nagurski complex. He punted outdoors under the watchful eye of Vikings special teams coach Mike Priefer. They worked together for a significant amount of time and Mortell said they focused on punt placement, pooch punts and hang time. The Vikings drafted Jeff Locke in the in fifth round of the 2013 NFL Draft, but with a yards per punt average near the bottom of the league, Minnesota might be willing to add some training camp competition.

Will Ratelle turns heads
There was one small school player that really turned some heads at the University of Minnesota Pro Day. At 5’9” and 251 pounds, University of North Dakota linebacker Will Ratelle ran a 4.54 40-yard dash, added a 36-inch vertical, a 9-10 broad jump, and 36 bench reps. Ratelle has the athleticism to really contribute at the next level. His frame is full of muscle and he is getting looks at both linebacker and fullback. His hands were very good as he came out of his breaks and he added a superb one-handed catch in the linebacker positional drills. Ratelle was by far the stand-out among any of the small-school players who attended the pro day. His size will be the only obstacle, but his strength, speed, and instincts might be enough to land him a place in the NFL. Several scouts spoke with him after the workout and it appears he really did himself well at the pro day.

Here is a video of his 37-rep bench press performance at 225 pounds: