What does the Lewis Cine selection tell us about the Vikings' new defensive scheme? 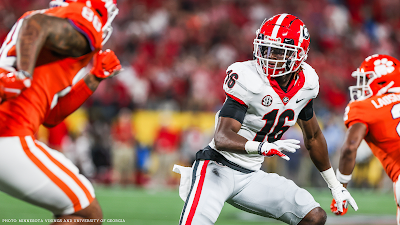 The Vikings selected Georgia safety Lewis Cine in the first round of the 2022 NFL Draft. What does this move tell us about Minnesota's new defensive scheme? Daniel House shared all of his thoughts!

As schemes evolve, NFL teams are building their rosters differently. Defensive coaches want personnel staffs to target versatile, athletic and physical skill sets at all three levels. It is one of the reasons why Minnesota selected Georgia safety Lewis Cine in the first round.

The Vikings are keeping up with trends by building their secondary differently. Why is this important? Well, schemes are constantly changing at every level of football. Defensive coaches need answers for the unique mix of skill sets they see on a weekly basis. For example, if you’re playing a team that has more physical and big-bodied targets, you want versatile defenders who can play in the box or cover up the seam.

The same thing can be said while matching up against speed playmakers too. Teams with versatile defensive backs often deploy creative dime packages that include a hybrid player. This athlete can rove around, rob underneath and align in different spots. By following this approach, offenses don’t necessarily know what wrinkle they will see on a play-to-play basis. Coaches are instead changing the picture and making the quarterback think about another variable before the snap. Not only that, but modern defenses keep offenses guessing by substituting and varying personnel packages. Coaches are essentially building a "defensive back tool box" that blends between length/physicality and smaller speed/agility skill sets. The goal is to have an answer for any type of offensive scheme you may be facing.

Teams are also countering various offensive personnel groupings by deploying three-safety looks and using creative dime packages. On top of that, offensive coaches are doing everything they can to get their speed moving away from the defense via crossing routes. Defensive minds are responding by showing two-high shell, rotating at the snap, robbing underneath and replacing the player. This can only be done effectively if you have a rangy and fast safety who can back pedal, open his hips and carry receivers on those deep crossing routes. Cine can do that.

Coverage tweaks are only part of the equation too. Coordinators consistently tweak their fronts, show exotic looks in pre-snap and send pressure via blitz packages or sims/creepers. Across each level of football, speed, versatility, physicality and pre-snap chaos are becoming prominent. It is why defensive coordinator Ed Donatell and the staff are going to implement a defensive scheme that is very multiple, interchangeable and reactive. These days, adapting and having a variety of answers for different personnel groupings/matchups is more important than ever.

Cine, a versatile, athletic (9.92 RAS score out of 10) and physical, checks all of the above boxes and provides the Vikings with a plethora of schematic possibilities. Minnesota’s coaches can draw up unique packages that take advantage of his athletic traits. Cine certainly has the range to play many different roles in the scheme. He can provide a physical dimension around the box, cover the deep half, or match up with targets out of the slot. While watching Cine, his downhill speed and explosiveness jump out. There were several instances where he even swiveled his hips and covered fast slot receivers up the seam or down the sideline. The Georgia safety plays with outstanding instincts and has the closing speed to make plays on the perimeter or in the alley.

Additionally, I really like Cine’s physicality. While playing in the alley, he quickly triggers downhill and makes aggressive run stops. This is critically important, especially considering the Vikings new defensive scheme will emphasize a few different things:

Due to his range, Cine is the type of player who could play in the box, align out of the nickel, play the deep half, rob the middle of the field, or rove around in dime packages. The Vikings are seeing the recent proliferation of three-safety looks and the the type of flexibility it provides. Defenses are combating explosive playmakers by finding creative ways to get all of their speed on the field. Cine’s skill set is headlined by hard-hitting physicality, but his athletic profile is impressive. The Georgia product ran a 4.37 40-yard dash and showcased his explosiveness by posting a 11’1” broad jump (98th percentile). Cine’s combination of size, length, range and speed are all traits the Vikings can build around.

Minnesota will likely run packages where Harrison Smith, Cam Bynum and Cine are all on the field together. People forget that Bynum was a cornerback prospect coming out of California. He has the coverage background, so that provides the Vikings with additional schematic options. More importantly, Harrison Smith is one of the best pre-snap disguise safeties in the league. His intelligence and instincts in the backend are a major asset for Minnesota’s scheme.

With the addition of Cine, the Vikings’ defensive staff can now interchange their safeties based upon certain matchups and tendencies they are seeing during games. These days, having a reactive defensive scheme is more important than ever. That alone is one of the reasons why I felt like Minnesota would value a versatile defensive back early in the draft.

Thoughts on the Trade

I know there was a lot of debate regarding the Vikings’ decision to trade back. New trade models, including Pro Football Focus’ WAR metric, said Minnesota won the trade. As Adofo-Mensah noted in last night’s press conference, trade charts are used as a guide. It is important to evaluate these decisions from multiple vantage points. You have to ask yourself a few things:

From the beginning, I felt like the sweet spot of the draft fell between No. 25 and 75. There are a lot solid players in that window who can contribute right away and provide critical depth now and into the future. Kwesi and the staff ultimately felt like moving up 12 spots from No. 46 to No. 34 was valuable based upon the structure of their board.

I understand why people are questioning an inter-division trade with the Lions, but I feel as if Kwesi really wanted to gain valuable assets near the start of the draft’s sweet spot. Now the Vikings can reset their board, determine which players they really covet and entertain possible trade options at No. 34. Moving forward, it will be fascinating to look back and see how this trade with Detroit plays out.

If they stay put at No. 34, I’d consider a few different players, including pass rusher Boye Mafe (Minnesota), cornerback Kyler Gordon (Washington), cornerback Andrew Booth Jr. (Clemson) and wide receiver George Pickens (Georgia). I’m guessing the Bucs will select UConn defensive tackle Travis Jones, so all of the above options may be available.

Mafe would provide the Vikings with another dynamic pass rusher to go along with Za’Darius Smith and Danielle Hunter. The Gophers pass rusher’s skill set is headlined by dynamic speed and explosiveness. Mafe has the versatility to rush off the edge, drop in space and stand up inside. Not to mention, there is still a lot of potential that an NFL team can unlock while developing Boye. I got to see him up close for four years while covering the Gophers and feel like he would be an excellent fit for the new scheme. Minnesota needs capable depth on the edge and Mafe would provide that.

When it comes to cornerbacks, I’m much higher on Kyler Gordon than most. He is a physical and aggressive cornerback who gets into passing lanes. Gordon skill set is headlined by his agility, lower-body explosiveness, physicality and versatility. He could align inside or out depending on where he is needed most. I also think the Vikings will really value his blitzing ability and the dimension he can bring there.

On the other hand, Minnesota may wait until later on Day 2 and target Houston cornerback Marcus Jones, an aggressive nickel corner and dynamic return man. I also wouldn’t be surprised if the Vikings selected a linebacker at some point on Day 2 with options like Leo Chenal and Nakobe Dean still available.

As the day progresses, it is worth keeping an eye on Kentucky defensive lineman Josh Paschal as well. He is a versatile, disruptive player who sets the edge and defeats blocks. Paschal would fill a need and fit Minnesota’s defensive scheme quite well.

The Vikings have a plethora of options on the board. As things stand now, they could stay put and make three selections between No. 34 and 77 or explore trading back for more assets. It just depends on the type of trade offers Minnesota receives for No. 34. A team in need of a quarterback may send the Vikings a lucrative package. We’ll soon find out!