What will new GM Kwesi Adofo-Mensah bring to the Vikings? 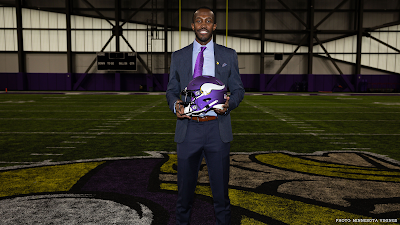 The Wilf family handed new GM Kwesi Adofo-Mensah the Vikings' paintbrush. Time will tell, but right now, it is hard not to be excited about the creative mind standing in front of the canvas. Daniel House shared all of his thoughts in this piece!

The best organizations in any line of work value collaboration, innovation and research. At the start of the interview process, Minnesota Vikings owner Mark Wilf stressed the importance of those traits as the organization searched for a new general manager.

Adofo-Mensah, 40, is one of the most versatile front office executives in the NFL. He earned a degree in economics from Princeton, received his master’s from Stanford and worked on Wall Street as a day trader. Adofo-Mensah even considered becoming an economics professor before he found his true calling - football.

Kwesi instead joined the San Francisco 49ers and transformed the organization’s approach. While working as the team’s Director of Football Research and Development, he changed the way coaches and executives viewed the game. He developed innovative strategies for game management, drafting and personnel acquisitions. Kwesi was often labeled as an “analytics staffer” by many people across the league. However, 49ers GM John Lynch said Kwesi viewed his role with the organization much differently.

“He always hated when we called it analytics. He preferred research and development,” Lynch said in a statement through the Vikings. “Just a very forward thinker, but he wanted to learn about watching football and studying players and did a tremendous job of that.”

Adofo-Mensah’s philosophy regarding research and development is refreshing. In recent years, the word “analytics” has become a common buzz word across sports. Many people believe that a person with this type of background simply relies upon data while making decisions. However, that is only part of the story. Staffers who work in the research and development segment of football are simply gathering information. This is not something that is new in football either.

Over the years, I have found that many coaches at the college and NFL levels are gathering quantitative and qualitative data and do not realize it. Coaches usually track certain trends while breaking down film, gaining feedback from players and making adjustments. These days, people like Kwesi are gathering this information, asking questions and thinking outside the box.

For example, expected points added (EPA), success rates, testing data and other advanced metrics are changing how executives view the game. Not only that, but things like grit scores, interviews and emotional intelligence data are helping personnel staff’s evaluate prospects better. Adofo-Mensah will certainly take those things into consideration while developing a new decision-making framework in Minnesota.

It is important to note how Kwesi incorporates player, coach and organizational feedback into the decision-making process. After doing that, he may combine this qualitative data and football context with numbers. That approach will help Kwesi and  the Vikings’ organization make evidence-based decisions.

For years, I have always felt like data is simply information. It is presented in a variety of different forms and explains the “why” behind everything. Many people unfairly assume executives or analysts like Adofo-Mensah are simply using spreadsheets to run a franchise. This couldn’t be further from the truth, though.

Numbers and trends are just one portion of the decision-making process. Feedback, qualitative information and interviews are shaping the way organizations make decisions. By finding a balance between data usage and football instinct, executives like Adofo-Mensah are helping organizations find small, or even large, competitive advantages.

When the Vikings parted ways with GM Rick Spielman and head coach Mike Zimmer a few weeks ago, ownership knew a fresh approach was necessary. The Wilfs were obviously intrigued by Adofo-Mensah’s unconventional and innovative style. Before the Vikings chose Kwesi, no NFL team had ever hired a general manger who worked as an analytics staffer. Minnesota broke away from the conventional mold and may end up starting a revolution by doing so.

Adofo-Mensah has plenty of challenges ahead, such as navigating salary cap constraints, adding more depth, preparing for the draft and determining the future of quarterback Kirk Cousins. More importantly, in a few days, Kwesi will make his first franchise-defining decision - hiring a new head coach. Adofo-Mensah certainly has a few names in mind and probably made his intentions clear during the interview process. It will not be surprising if he targets Rams offensive coordinator Kevin O’Connell or 49ers defensive coordinator DeMeco Ryans. Both of them worked with Adofo-Mensah in San Francisco and interviewed with Minnesota earlier in the process.

No matter what, when Adofo-Mensah picks his first head coach, he should value collaboration, leadership, chemistry and player development skills. All of the best executives understand which players fit and project best within a coach’s scheme. It is why assembling a deep coaching staff should be Kwesi’s top priority.

As Adofo-Mensah begins making these type of franchise-defining decisions, he can lean on his versatility and unique background. Kwesi’s experience in research/development, scouting (under Andrew Barry), contracts, business and leadership will guide him now and into the future.

Handing Over the Paintbrush

At the end of the day, everyone knew the Vikings needed a fresh, energetic and innovative approach at the top of their franchise. Adofo-Mensah’s unique background and versatility will change the way everyone in Minnesota views football. Not to mention, a groundbreaking hire like this could open the door for similar people who are studying the game through a different lens.

As many of you know, I have always drawn parallels between football research and painting.

With every single brush stoke, a painter is bringing his or her vision to life. On the football field, coaches and players control the “game painting” by executing a combination of plays. Front office executives also contribute by making their own creative decisions. In fact, every season, a team’s painting looks different based upon personnel, opponent strengths/weaknesses, salary cap constraints and draft picks. Some general managers make the “paintings” even more unique by gathering the right information and researching new ideas.

Additionally, like a painting, each game or season becomes its own creation. There are certain strategies and schemes you use to attack weaknesses and maximize strengths. Ultimately, every game and season is its own unique work of art. Each “brush stroke” (or decision) defines what the painting will become.

Players, coaches and front office executives are in complete control of that creative process (vision). As always, outsiders and critics will interpret the artwork, but they may overlook an important detail while doing so. Like painters, “football artists” are the only people who must understand how every detail contributes to the piece.

Top “football artists” collaborate with every member of the team and develop the league’s most creative paintings. They incorporate feedback, make adjustments and sometimes have the self-awareness to start over. On the other hand, executives, coaches and players who aren’t as successful may try painting the canvas individually without any input. This often disrupts the group’s vision and produces a messy painting. Instead, the best organizations all work together while creating their “game, season and organizational paintings.”

Adofo-Mensah has been handed the Vikings’ brush and will eventually show the world his football paintings. Time will tell, but right now, it is hard not to be excited about the creative mind standing in front of the canvas.