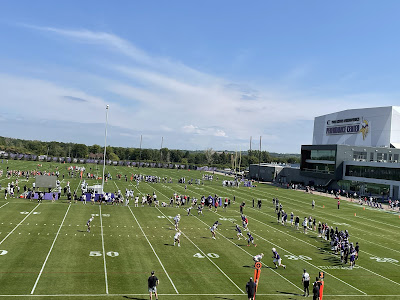 The Vikings hosted their first joint practice with the San Francisco 49ers on Wednesday. What did Daniel House learn while attending the session? Here is a brand new notebook!

The Vikings hosted their first joint practice with the San Francisco 49ers on Wednesday. It was a great opportunity to see each unit go through a variety of competitive 11-on-11, red zone and 1-on-1 periods. Both coaching staff implemented specific situations and tested each level of the depth chart against top competition.

So what did I learn while watching all of those quality reps? Let’s dive in:

Eyes on the Backup WR Spots

The back half of Minnesota’s wide receiver room is filled with competition. Right now, Olabisi Johnson, Ihmir Smith-Marsette, Myron Mitchell, Albert Wilson, Trishton Jackson and Jalen Nailor are all competing for the final three roster spots. As Minnesota’s front office makes difficult roster decisions in the coming weeks, special teams will be a major factor. It is why many of these players are frequently earning practice reps as returners and punt gunners.

With that in mind, I zoned in on every drill that involved a backup wide receiver. (Because everyone knows Justin Jefferson's practice session was outstanding). Here is what I found:

During Wednesday’s 1-on-1 session, Myron Mitchell flashed. He transitioned from break foot, to drive foot, to line foot while setting up a deep speed cut. Mitchell wonderfully accelerated out of the break point and generated separation at the top of the route. So many young receivers banana curl out of this route, but he flattened it off and did not allow cornerback Qwuantrezz Knight to compress space.

A little later, Mitchell showcased a little nuance and physicality at the top of a dig route. He looked like he may be setting up a corner route, but he felt cornerback Tariq Castro-Fields climbing over his inside hip. Mitchell put his foot in the ground and used the wiper technique to shed Castro-Fields. Myron then flattened off the dig route and tracked the ball outside of his frame.

The former UAB receiver also displayed excellent straight line speed while running a double move. He attacked the cornerback’s blind spot and accelerated to gain separation. Mitchell could have tracked the ball a bit better, but the pass was also poorly placed. Despite that, I liked the way he set up the route and accelerated out of the break point.

Another thing I noted? Mitchell’s performance during the special teams portion of practice. He breezed down the field and found the ball carrier while working as a punt gunner. Those details matter and give fringe roster players a chance if battles are tight.

When it comes to the wide receiver No. 4 or 5 spot, Bisi Johnson looks like he is in control. I liked what I saw from him as a blocker during practice and the first preseason game. Johnson can handle blocking the perimeter within condensed formations. Those sets improve angles, but require quality blocking from wide receivers on the edge. Johnson shows the willingness to block at a high level, which is important. In addition, during Wednesday’s practice, Bisi ran a slot fade and made a great play at the catch point. Johnson won the rep due to excellent body control, positioning and ball skills. The Colorado State alum missed all of last season with a knee injury, but looks poised to make an impact this year.

Ihmir Smith-Marsette put together a strong preseason performance and put together more quality reps on Wednesday. Smith-Marsette got open off a fade against cornerback Tariq Castro-Fields. He won with a nice release off the line of scrimmage and sped past Castro-Fields. A little later in practice, Smith-Marsette exploded out of the break and gained separation off of an out route (vs. Ambry Thomas). The rep was excellent, but he did not execute the situation well. Minnesota was simulating a situation where it trailed 21-20 with 1:30 left and one time remaining. Smith-Marsette caught the pass and didn’t get out of bounds, so the clock continued running. Kicker Greg Joseph eventually ended up making a 46-yard field goal to end the drill.

Trishton Jackson won a 1-on-1 rep by using a head fake at the top of a post. He drove off his break foot, sold the head-fake, got Deommodore Lenoir trailing behind him and made the grab. Jackson has flashed during other practice sessions and made a pretty good impression during the preseason game too. We will see if he continues to ascend forward during upcoming practices and exhibition matchups.

We all saw Albert Wilson catch a pair of touchdowns during Sunday’s preseason game. He did it against backups, but still showed off solid route running while doing so. Wilson’s success continued during Wednesday’s red zone period as well. He beat Qwuantrezz Knight and made an outstanding tip-toe grab in the back left corner of the end zone. Wilson adjusted to Sean Mannion’s pass and managed to get both feet down for the score. The veteran wide receiver was also receiving return reps early in practice. There is no doubt that Wilson must make an impact on special teams if he wants to secure a roster spot.

Jalen Nailor, a sixth-round pick out of Michigan State, is still learning the intricacies of the position. Despite that, he has outstanding athletic ability. Nailor frequently uses his speed to get open off of deep crossers and vertical routes. He may not be as polished as other receivers yet, but has a very high ceiling. On top of that, he has extensive experience as a return man. He did muff a kickoff return in the first preseason game, but did not frequently do that during practice or his career at Michigan State.

I’m fascinated to see what the Vikings decide to do at wide receiver. They have a great mix of skill sets and high-upside players within the position group. However, at the end of the day, Minnesota’s front office must strike a balance between immediate receiving talent, special teams ability and future upside.

Za’Darius Smith is looking comfortable within the Vikings’ scheme. During a team drill, he displayed excellent bend while beating Trent Williams around the edge. Smith touch sacked Lance and flexed for the crowd. Throughout the day, Smith generated several pressures, including one that blew up a flood concept. The Vikings’ free agent signing looked impressive in tandem with Danielle Hunter. Minnesota is drawing up creative packages that take advantage of Hunter and Smith’s versatility and unique athletic ability. Hunter already looks comfortable lining up in different spots within this defensive scheme. At one point, he won with a speed rush and forced Lance to step up into the interior. This year, I can’t wait to see Hunter and Smith create mismatches by moving all over the front.

After a very strong preseason game performance, rookie right guard Ed Ingram earned reps with the first team during Monday’s practice. Ingram plays with great pad level, sets a strong anchor, strikes with powerful hands and has impressive length/wingspan in pass protection. He also does an excellent job of climbing into the second level and generating push with his lower-body. Ingram is getting better each day and the coaching staff recognized it by giving him first team reps against the 49ers. The Vikings’ second-round pick gained more quality snaps with the starters, which is huge, especially if the staff is learning toward starting him this season.

Kicker Greg Joseph drained six of his eight field goal attempts during Monday’s practice. His lone misses occurred from 45 and 48 yards out. It is worth noting that each of those mistakes occurred with punter Ryan Wright holding.

The Vikings host their second joint practice with 49ers tomorrow. The session begins at 10 a.m. CT.

I miss doing frequent Vikings training camp notebooks, but my new Gophers business, GophersGuru.com, is where I’m investing a large chunk of time. I will write Vikings articles as my schedule allows, however, if you’re interested in Gophers football content, check out Gophers Guru. The All-Access subscription is just $5 a month.