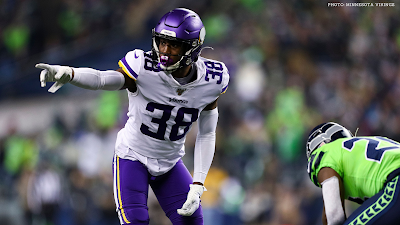 Cuts are about to begin across the NFL. What could the Vikings' initial 53-man roster look like? Daniel House shared his projection.

Teams across the NFL are trimming down their rosters ahead of Tuesday’s deadline. Right now, everyone is wondering how Minnesota might structure its roster.

With that in mind, I decided to put together a Vikings 53-man roster projection based upon what I saw during training camp and the preseason.

Analysis: The Vikings need to sign a veteran backup quarterback. After looking respectable during training camp, Jake Browning struggled in the preseason. Kellen Mond needs more time to develop and should not be Minnesota’s primary backup this season. Nick Mullens was recently released by the Eagles. He worked within a similar offensive system in San Francisco and may fit well within the Vikings’ quarterback room. No matter what, the team should be keeping an eye out for options on the waiver wire.

Analysis: With injuries hitting this room, the Vikings suddenly have question marks entering the season. Right now, we don’t know how much time Alexander Mattison and Kene Nwangwu will miss. The team released Ito Smith on Saturday, which likely signals that Mattison might be returning soon. Ameer Abdullah has flashed on special teams and is the modern era Marcus Sherels. Just when you think he may get cut, he always finds a way to make the team.

Analysis: C.J. Ham is one of the Vikings’ most valuable players and we do not talk about it enough.

Analysis: I left camp a little worried about the wide receiver group. Ihmir Smith-Marsette looked very inconsistent and did not meet my overall expectations. However, he figured things out over the final two preseason games and will be a critical special teams contributor for the Vikings. Not only that, but he could receive a few gadget plays per game to take advantage of his unique athleticism.

Wide receiver K.J. Osborn put together one of the best overall training camps of anyone on the roster. Osborn was running crisp routes, gaining separation and making tough grabs at every level. He made significant strides and could see rotational action this year. Not to mention, Dede Westbrook is expected to be ready for the season, which provides the Vikings with a little more experience in the receiver room.

Analysis: With Irv Smith Jr. expected to undergo surgery for a meniscus injury (according to Tom Pelissero), the Vikings should be evaluating the waiver wire and trade market for tight end help. Tyler Conklin was already battling an injury before we learned this news about Smith. Minnesota’s lack of depth behind Smith and Conklin leaves them with minimal replacement options. The Vikings must find an upgrade over Zach Davidson.

Analysis: There are no surprises with the first eight players on this depth chart. Blake Brandel is the only player who showed any promise as a swing tackle. Brandel started camp strong but did not play as well in the preseason. I think the Vikings will be hitting the waiver wire for a swing tackle once options become available across the NFL. The swing tackle spot is a clear weakness, especially since Rashod Hill will be starting at left tackle until Christian Darrisaw is ready.

Analysis: This is probably the deepest position on the Vikings’ roster right now. I left camp extremely impressed with Minnesota’s defensive tackles. That trend continued into the preseason. While putting together this projection, I had trouble deciding which player would earn the last spot. I ultimately chose Kenny Willekes. He improved during the preseason and has nice bend and flexibility coming off the edge. The Vikings even tried kicking Willekes inside and got a look at him from that spot. I think there is versatility and developmental potential within his game. Willekes reminds me of a very young Brian Robison. Minnesota could try sliding him onto the practice squad, but I don’t think he would make it there.

Hercules Mata’afa has moved between linebacker, defensive tackle and defensive end during his time with the Vikings. He had a really strong final preseason game, but I think Willekes has a higher overall ceiling.

Analysis: Nick Vigil has been a pleasant surprise and looks like he could be a solid third linebacker for the Vikings this season. He is particularly strong in coverage and can help Minnesota on passing downs.

After the first three options in the linebacker room, the talent level drops off. I believe the Vikings like the developmental potential of Troy Dye. However, the former Oregon Duck must get stronger and improve his ability to get off of blocks.

Ryan Connelly showed flashes as a linebacker and was very consistent on special teams. I think Connelly did enough in the preseason to initially squeak out one of the team’s final roster spots. That doesn’t mean the Vikings won’t search for upgrades on the waive wire though.

As expected, Chazz Surratt is pretty rough around the edges. The former quarterback has not played much at linebacker. Surratt has excellent athletic ability and range but is still developing instincts. There were quite a few situations where he was misaligned in the preseason. This year, Surratt will work as a primary special teams contributor until he develops more as a linebacker.

I have concerns about the depth at this position. This group made a lot of mistakes throughout training camp and the preseason. With that in mind, I would certainly evaluate the waiver wire for potential depth upgrades.

Analysis: Kris Boyd has been outstanding throughout training camp and the preseason. If an injury hits, I feel comfortable about him stepping in. I debated keeping Harrison Hand as a seventh cornerback, but I don’t believe his preseason performance warrants a roster spot. Parry Nickerson showed me more overall flashes than Hand. However, I don’t have room for him either.

Analysis: I’m expecting the Vikings to add a safety from the waiver wire. In fact, I would not be surprised if the team signed Will Parks after Week 1. This would eliminate the vested veteran salary guarantee and give Minnesota more financial flexibility.

The Vikings really like what Josh Metellus can do across special teams units, so I think his roster spot is safe. Cam Bynum has future potential but is not ready for a large backup role. If the Vikings end up signing a veteran safety, they would probably cut Metellus and stash him on the practice squad.

Analysis: Greg Joseph is easily won the kicking battle and is the Vikings’ guy entering the season.