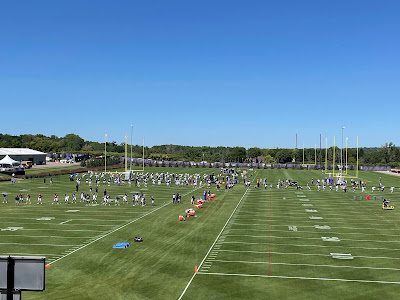 The Vikings and Broncos kept evaluating players during their second joint practice at TCO Performance Center. Daniel House shared all of his takeaways in this new notebook!

The Vikings and Broncos continued to test each other during Thursday’s second joint practice at TCO Performance Center. Mike Zimmer and Vic Fangio kept using different blitzes and fronts throughout the session. This put stress on both offensive line units.

The left side of Minnesota’s offensive line did not hold up well during the stunt drill. Rashod Hill and Ezra Cleveland struggled to communicate and pass off rushers at the right depth. This trend has popped up throughout camp during team and OL/DL drills. Nonetheless, the right side of the Vikings’ offensive line is handling these situations much better. Oli Udoh got first-team right guard reps alongside Brian O’Neill during Thursday’s joint practice. Udoh has held up really well against stunts, blitzes and other rushes that test his lateral agility. There was also a noticeable difference in the ground game with Udoh playing right guard. He was displaying his power and frequently hitting the second level. This opened some big creases for Dalvin Cook off outside zone. These type of lanes were less prevalent during Wednesday's session with Dakota Dozier at right guard. Udoh is leading the battle and I do not think it is particularly close.

One of the biggest takeaways from the second joint practice: the Broncos’ reserve defensive tackles dominated Minnesota’s guards. Dru Samia was pushed flat on his back during a rep against Shamar Stephen. Samia also badly lost a rep to defensive Isaiah Mack, who had a rather strong practice. The Vikings’ second-tier guards also struggled in 1-on-1 drills. Dre’Mont Jones blew past Dakota Dozier and Shamar Stephen muscled around Mason Cole. All day, the Broncos’ interior defensive line was getting pressure, especially against Minnesota’s second and third-string offensive line units. After watching training camp, my biggest concern revolves around this team’s backup offensive line depth. If Rashod Hill starts at left tackle, Blake Brandel is probably the team’s swing tackle. Brandel started camp strong but was less impressive in the joint practices. Derrek Tuszka blew past him in the 1-on-1 drills and he allowed a couple of pressures in team drills.

Within the interior, Wyatt Davis is the only reserve player who has shown flashes. He has nice balance in pass protection and plays with a mean streak as a run blocker. Davis is a legitimate reserve offensive lineman and should be the team’s primary backup guard. Although he has been inconsistent, his flashes have been very strong. With more reps, I think he could turn into a future starter for Minnesota. Davis keeps getting better and certainly had a strong practice on Thursday.

Following roster cuts, the Vikings should be perusing the waiver wire for backup guards and swing tackles. It would be particularly advantageous to find an interior player with guard and center flexibility. After seeing practices, I think Mason Cole is better suited to play guard. However, right now, that is just not possible because of the Vikings’ current interior depth chart.

Garrett Bradbury also struggled during the 1-on-1 portion of practice. He lost reps against DeShawn Williams and Shamar Stephen but was a little more consistent in team drills. Bradbury struggles most while anchoring against big nose tackles in pass protection. He certainly does a much better job of handling speed and quickness. I honestly wish he could play guard.

On the other side of the ball, linebacker Eric Kendricks was making plays in the 7-on-7 period. Quarterback Teddy Bridgewater tried to squeeze a tight window throw into tight end Noah Fant, but Kendricks intercepted him. Then, in the same sequence, he tried to connect with Jerry Jeudy off a slant. Kendricks dropped into his zone and batted down the pass. Jeudy had cornerback Harrison Hand beat off the line of scrimmage, however, Kendricks made an excellent play in the passing lane. Bridgewater really struggled in the red zone and 7-on-7 periods but was slightly better in the team sessions.

One thing I haven’t mentioned much during camp: the Vikings’ reserve linebackers are struggling in coverage. There are numerous situations where they are out of position or get turned around by wide receivers or running backs. Within the 11-on-11 red zone period, Broncos tight end Eric Saubert toasted linebacker Troy Dye. Linebackers Chazz Surratt, Cam Smith, and Ryan Connelly have also been rather inconsistent in coverage. This is something worth monitoring during the preseason.

Overall, Lock had more command and snapped through progressions better in most of the team, 7-on-7 and red zone periods. At one point, the young quarterback nearly completed the play of the day. KJ Hamler got separation and had space near the end zone. Lock confidently ripped the deep pass, but couldn’t quite connect. I believe there is more vertical and deep, explosive play-action potential with Lock under center. He is just inconsistent and sometimes hesitates or makes the wrong read. If you’re a Broncos fan, I’ll be talking more about this during an upcoming podcast appearance with the Mile High Report.

On the Vikings side, Kirk Cousins was not very sharp in this practice session. Adam Thielen got separation off a corner route against Patrick Surtain, but Cousins shot the pass over him. Also, Cousins did not respond well to pressure. Blake Brandel rotated into the left tackle spot and Denver’s pass rushers exposed him. The Broncos were also mixing up stunts, which collapsed the pocket and forced Kirk to get rid of the ball quickly. Throughout camp, Minnesota’s offensive line (particularly the left side with Hill and Cleveland) has not responded well to stunts and lateral movement by defensive line units. Cousins needs structure, so the Vikings’ offensive line must figure this out ahead of the season.

Nwangwu is a weapon

Within the backfield, running back Kene Nwangwu stood out. He put his foot in the ground and executed an extremely sharp cut off an outside zone run. Nwangwu frequently makes one cut and quickly turns on the jets. His combination of sharp agility and elite speed could be a major weapon for the Vikings this season. I think Nwangwu should receive a special set of designed plays during games. His athletic traits and explosive playmaking ability would create mismatches against opposing defenses.

More importantly, he had two really strong reps during the live kick return period. His vision, acceleration and elusiveness are all traits that help him thrive in that role. After seeing camp, I think he should be the team’s primary kickoff returner.

Cornerback Kris Boyd had two excellent pass breakups during a situational period against Denver’s first-team unit. Jerry Jeudy tried popping off a pair of slants, but Boyd remained tight out of the break point and notched back-to-back pass breakups. Boyd has been up and down during camp but flashes his potential from time to time. I will be watching him closely during preseason games. Boyd could carve out a key reserve role as the Vikings evaluate potential backups in the secondary.

I have noted it several times throughout notebooks, but D.J. Wonnum has been really impressive during camp. He is winning 1-on-1s and consistently creating pressure from multiple alignments in team drills. On Wednesday, he swept a pair of reps against Garett Bolles and flashed during nearly every portion of practice.