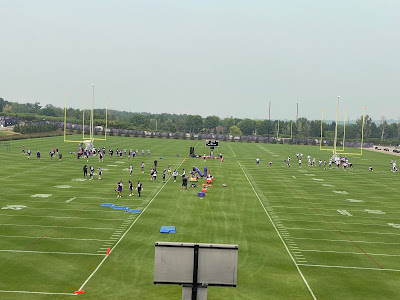 The Vikings held their second full-squad training camp practice on Thursday afternoon. Daniel House was there shared all of his takeaways in this new notebook!

Minnesota's second full-squad session heavily featured rushing periods and light team drills. In the early stages of camp, teams often focus on player development. Position coaches were frequently stopping players and teaching them new techniques. During position drills, head coach Mike Zimmer rotated between groups but spent a large chunk of time with the safeties. He was coaching up young players through hands-on instruction. As I noted in my last defensive piece, there is quite a bit of uncertainty behind Harrison Smith and free-agent signee Xavier Woods. Zimmer knows the team must build depth by developing young players like Camryn Bynum and Josh Metellus.

One player to keep an eye on

During unpadded practices sessions, I am always zoning in on the technique, body types and movement skills of athletes. One player who grabbed my attention was linebacker Nick Vigil. His lateral agility, speed and range were noticeable during team and positional work. Vigil changed direction quickly while going through coverage drills. Later in practice, he also tightly mirrored tight end Irv Smith Jr. in the flat and notched a pass breakup. Vigil, a former third-round draft pick in 2016, spent last season with the Chargers. We must see how he performs as camp progresses, but his athletic traits certainly stood out today. I believe there may be a little upside and potential within his skill set.

There were only a couple of highlight plays from Thursday’s team sessions. Early in practice, wide receiver KJ Osborn stemmed outside, attacked leverage and turned cornerback Cam Dantzler around. Once that happened, Osborn gained vertical separation and hauled in a deep 40-yard pass from quarterback Kirk Cousins.

Osborn is a player everyone will be watching closely during training camp and the preseason. Zimmer and Rick Spielman both mentioned the second-year wide receiver during their pre-training camp press conferences. It will be interesting to see if Osborn keeps making noise during practice sessions.

Cousins airs it out off play-action and boots

Throughout the day, Cousins kept airing it out off of play-action. During one team period, he rolled out off a boot and faced heavy pressure from defensive end Stephen Weatherly. Cousins launched an off-platform throw and found wide receiver Adam Thielen, who got open off a corner route. Thielen executed a beautiful head-fake that shifted safety Xavier Woods off balance.

Then, later in practice, Cousins faced extensive pressure from a stunt and blitz package. With both Danielle Hunter and Armon Watts in his face, he zipped a pass off his back foot and found tight end Irv Smith Jr. via an over route. Smith tracked the pass and hauled it in about 35 yards downfield. Cousins' throw required excellent arm strength due to the pressure he was facing.

Finally, at the end of practice, the Vikings set up a red zone period inside the 10-yard line. On the second play of the session, Cousins quickly faced pressure. Danielle Hunter set up an inside counter move and got left tackle Rashod Hill to overset. Hunter chased down Cousins, who slid left and fired an errant pass into a crowd of players. The throw was then intercepted by safety Harrison Smith.

It is nearly impossible to evaluate offensive and defensive line play without pads. Coaches are using these practices to focus on technical development and installation. While doing that, Minnesota will be rotating many different players at right guard. During the first half of Thursday’s practice, Dakota Dozier was the team's starting right guard. Dozier probably ended up seeing the most snaps in team drills. However, during the second portion of practice, Oli Udoh also earned a few snaps at right guard. Udoh’s size and athletic profile certainly fit well inside. He simply must gain more reps and keep working on his technique. With that in mind, Minnesota will likely keep rotating Udoh between the first and second-team units early in camp.

Pierce does a little work, Breeland eases back and Smith sees action

Defensive tackle Michael Pierce (calf) saw action during individual drills. However, Pierce did not participate in any other portions of practice. He was instead going through workouts on a side field. Since Pierce was out, Armon Watts aligned alongside Dalvin Tomlinson. Then, during certain periods, Tomlinson subbed out and Sheldon Richardson played 3-technique. It is already clear that the Vikings have much more defensive tackle talent and versatility this year.

As cornerback Bashaud Breeland works his way back from offseason shoulder surgery, Cameron Dantzler and Patrick Peterson are seeing first-team reps on the outside.

When the Vikings were in the base package, Cameron Smith primarily worked alongside Eric Kendricks and Anthony Barr. Nick Vigil also saw a few rotational reps throughout practice.

The Vikings only worked on the return game once during practice. While doing so, these players took reps on the JUGS machine: Kene Nwangwu, Chad Beebe, KJ Osborn, Dede Westbrook, Ameer Abdullah and Ihmir Smith-Marsette.

Offensive tackle Christian Darrisaw and center Cohl Cabral did not participate in practice. Also, Cornerback Jeff Gladney (a legal matter) was not present.

Note: I will not be at practice on Friday or Saturday, but will be returning for the first three full-padded practices (Monday-Wednesday)! Stay tuned for more notebooks.