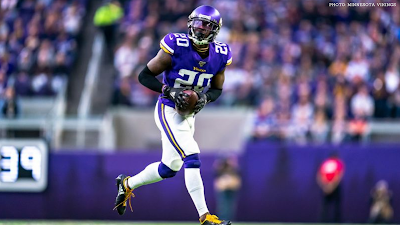 Which defensive position groups will Daniel House be watching during training camp? He shared his thoughts!

Not only that, but the return of defensive end Danielle Hunter, linebacker Anthony Barr and defensive tackle Michael Pierce should significantly upgrade every level of the Vikings’ defense.

As training camp begins, I will have my eyes on two defensive positions. First, let’s start at cornerback:

Entering this season, my biggest question is: how will veterans like Peterson and Breeland perform? Peterson’s play declined in each of his past two seasons with Arizona. On the other hand, Breeland is recovering from a shoulder injury. Minnesota needs both of its veteran cornerbacks to perform at a high level if they are going to be successful. Peterson should benefit from playing more zone coverage in Mike Zimmer's defense. However, we do not know that for sure.

Mackensie Alexander is also returning after spending one season with the Bengals. Alexander’s background as a nickel cornerback in Zimmer’s scheme will be a major asset. Zimmer even mentioned Alexander’s improvements during his pre-training camp press conference.

Behind Peterson, Alexander and Breeland, the back half of Minnesota’s cornerback depth chart is filled with youth. Cameron Dantzler flashed his athleticism and length when he was on the field last year. The biggest issue was Dantzler’s ability to stay healthy. Last year, he frequently missed time with various injuries. Despite that, when he was available, he displayed his upside and potential. After a full offseason of hands-on coaching, it will be interesting to see how much Dantzler improves.

Additionally, fans should monitor the progress of several other young players. Harrison Hand performed well at the end of last season and will benefit from a non-virtual offseason. On the other hand, Kris Boyd had an up-and-down 2020 season, but continues to show flashes of potential.

The Vikings have quite a few question marks at cornerback. There is boom or bust potential surrounding the Breeland and Peterson additions. If they indeed play at a high level, the Vikings’ defense should significantly improve. However, if they do not meet expectations or suffer any injury, Minnesota will be relying upon less experienced options. The absence of former first-round pick Jeff Gladney due to legal issues could also loom large, especially when it comes to the team’s overall depth.

The Vikings aggressively addressed the cornerback position in free agency, but now we must see how all of the pieces come together in training camp.

Secondly, I’m going to be zoning in on Minnesota’s safeties. The Vikings' depth chart is very thin at this position. Former Cowboys defensive back Xavier Woods was the team’s primary addition at safety. Woods is a rangy, instinctive safety who should pair up nicely with Harrison Smith. Over the next couple of weeks, I want to see how Smith and Woods perform together.

Then, I will be focusing on the back half of the safety depth chart. Rookie converted cornerback Camryn Bynum is probably the third-best safety on Minnesota’s roster right now. Training camp will provide us with an extensive look at his skills in the backend. As things stand right now, Bynum would likely be the first safety off the bench if an injury occurred. He does not have much experience and may not be ready for a primary backup role. We will know if that is the case after seeing him perform during training camp and the preseason.

After Bynum, we have no clue what the Vikings are going to do at safety. Josh Metellus was named the team’s Special Teams MVP last year and may earn a spot on the roster because of those skills. Since he was a rookie in 2020, I never had an opportunity to see him work in camp. I am looking forward to seeing if he made significant strides this offseason.

As things stand right now, the Vikings may end up keeping three safeties. Minnesota could do this if it believes Harrison Hand could play safety in a pinch. Hand has past experience at the position and could probably handle that switch.

Not to mention, keeping three safeties would allow them to stash an extra player on the 53-man roster that may get swiped off waivers. Then, once rosters are set, the Vikings could release that player and sign a safety.

Nonetheless, Minnesota should be monitoring roster cuts and looking for ways to upgrade their depth at this position.