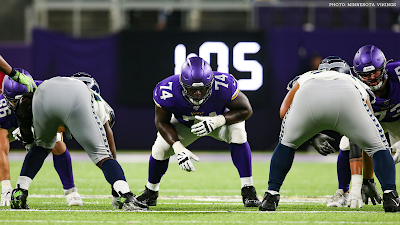 Which offensive position battles should fans watch during training camp and the preseason? Daniel House shared his thoughts in this post!

Minnesota's aggressive offseason sets the stage for several fierce position battles. Which ones will I be watching during training camp?

Let’s start on the offensive side of the ball:

The right guard position is one of the biggest question marks on the Vikings' offense. This offseason, Minnesota traded for Mason Cole and drafted Ohio State right guard Wyatt Davis in the fourth round. Over the past three seasons, Cole started 32 games, including 30 at center and two at right guard. He really struggled as a center and may end up fitting better at right guard. The former Michigan Wolverine has interior versatility, which is something the Vikings desperately need. I’ll be watching him closely during camp.

On the other hand, rookie Wyatt Davis’ skill set is filled with potential. Davis was widely considered a potential first-round pick before a knee injury caused his play to decline in 2020. The Ohio State guard played through a PCL/ACL sprain and bone bruise in his knee. This injury made it more difficult to evaluate his 2020 film. However, in 2019, he was one of the best guards in the country. He thrived in pass protection and was aggressive in the ground game. While evaluating Davis closely in the Big Ten, I was always impressed with his combination of mobility and power. He is a talented player and could emerge as the Vikings’ starting right guard during training camp. His role this season simply depends upon how quickly he can adjust and develop.

Outside of Cole and Davis, fans should keep an eye on one underrated candidate. In an interview with KFAN, GM Rick Spielman said Oli Udoh “has earned the opportunity” to compete with Cole and Davis at right guard. Udoh, a 6-foot-6, 325-pound tackle, has primarily worked at right tackle during his first two seasons with the Vikings. However, his athletic profile would certainly fit well inside. I did not get to watch camp last year but was particularly impressed with Udoh’s developmental potential back in 2019. I will certainly watch him closely during practices this year. With a strong camp, Udoh is someone who could emerge and earn a starting role.

As many of you know, I have been wanting the Vikings to sign a gadget receiver for the longest time. Minnesota needed a speedy slot option that could put stress on defenses in space. The Vikings finally addressed this by signing former Jaguars wide Dede Westbrook.

Westbrook spent the past four seasons in Jacksonville and worked with new Vikings wide receivers coach Keenan McCardell. This connection should ease Dede's transition into Minnesota’s offense. Westbrook has thrived in the slot by running solid routes and gaining separation. In fact, Westbrook’s 3.5-yard average separation metric ranked fifth among all wide receivers in 2018, according to NFL Next-Gen Stats. More importantly, he finished in the top 15 of this statistic during each of his first three seasons in the league.

Westbrook also adds a new dimension to the Vikings’ offense. Minnesota can run more gadget plays and take advantage of his athleticism in space. Not to mention, the Vikings know he can provide value as a punt returner. This is something that general manager Rick Spielman mentioned during his pre-training camp press conference. Westbrook’s experience in the return game is certainly something that grabbed the personnel staff's attention.

It is worth noting that Westbrook suffered an ACL tear in October and missed most of the 2020 season. The Vikings were monitoring Dede's recovery and decided to sign him after his workout last weekend. Minnesota has not placed Westbrook on the physically unable to perform list (PUP), which indicates he should be ready for camp.

After signing Westbrook this weekend, the Vikings created even more competition in the wide receiver room. Olabisi Johnson, K.J. Osborn, Chad Beebe and fifth-round draft pick Ihmir Smith-Marsette are all competing for roster spots. Not only that, but undrafted rookies like Whop Philyor and Blake Proehl will be trying to make a strong impression.

Outside of the above players, I’m probably most excited to watch Ihmir Smith-Marsette. I felt like his talent was not completely maximized during his career at Iowa. He is a very sudden route runner who frequently makes explosive plays in space. Additionally, his footwork and releases off the line of scrimmage help him gain separation against opposing defensive backs. Smith-Marsette can also provide value as a return man until he completely develops his skills at wide receiver. Overall, the fifth-round draft pick could end up being a breakout player for the Vikings if everything clicks.

Wide receiver K.J. Osborn is another player who will likely compete for one of the final roster spots. Osborn apparently put together a strong minicamp and was mentioned by both GM Rick Spielman and head coach Mike Zimmer during their pre-training camp press conferences. Osborn did not receive a normal offseason last year, which makes it difficult to evaluate his full potential. With a strong training camp, he could earn himself a roster spot. However, since Westbrook, Smith-Marsette and Chad Beebe are all competing with him, the road won’t be easy.

Many of you have also asked: which undrafted wide receiver could emerge? I have my eyes on wide receiver Blake Proehl, the son of 17-year NFL veteran Ricky Proehl. Last year, the East Carolina product enjoyed success out of multiple alignments while racking up 577 yards and four touchdowns. In many ways, his skill set and body type remind me of a very young Adam Thielen. Proehl is a decent route runner with good ball tracking skills and ability after the catch.

Ultimately, I am very intrigued and want to see how the undrafted rookie performs and develops during training camp and the preseason.