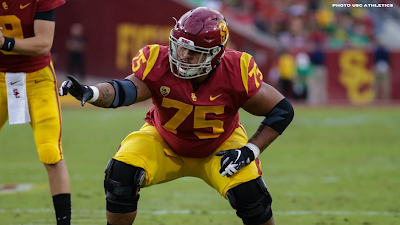 With the NFL Draft on the horizon, it is time to start thinking about the Vikings’ possible options. Daniel House shared several different scenarios!

With the NFL Draft on the horizon, it is time to start thinking about the Vikings’ possible options. GM Rick Spielman and the front office could implement a variety of blueprints.

However, we all know Minnesota must invest ample draft resources into its offensive line. With that in mind, the Vikings may explore several different strategies.

Trade up for Slater

If quarterbacks start flying off the board, a top offensive tackle or guard may slide. Northwestern’s Rashawn Slater is one of my favorite players in the entire 2021 draft class. He is a premier athlete with excellent hand technique and quick feet. Slater posted a 9.71 Relative Athletic Score (RAS), including elite outputs in the explosiveness and speed composites, according to Kent Lee Platte’s database. I had an opportunity to study him very closely in the Big Ten. While watching him, I was very impressed with his hand technique. He frequently gets position, punches and anchors down against top pass rushers. Slater’s performance against Chase Young was very impressive. His solid technique and quick feet were on full display during that game.

Throughout his career at Northwestern, Slater also displayed his mobility and blocking range. He frequently hit the second level and took great angles. Additionally, the Wildcats’ guard got out in front of screens and sparked explosive downfield runs. His skill set features excellent athleticism, hand technique, power and range. Slater would fit well at guard in the Vikings’ zone scheme because of his ability to hit the second level and reach defensive tackles. He could also play on the edge and has past experience at both right (26 games) and left tackle (11 games).

Based upon his film, testing metrics and team needs, Slater will likely be selected ahead of the Vikings. Minnesota could certainly try moving up a few spots for Slater, but without a second-round pick, things become more complicated. Trade value charts indicate it would take a first-round pick swap, along with No. 78 (third round), No. 119 (fourth round) and No. 134 (fourth round) to trade up with the Panthers at No. 8. However, Carolina seems like a logical fit for Slater, especially after the team recently traded for quarterback Sam Darnold.

An aggressive move for a QB?

In the event Minnesota trades up, an offensive lineman might not be the only target. I wouldn’t be surprised if they made an aggressive move for a quarterback. With Kirk Cousins under contract for two more seasons, the Vikings must begin thinking about the future. The Wilf family does not want to consistently pick in the middle of the first round. That means the front office may consider taking advantage of their current draft position. If a quarterback like Justin Fields or Trey Lance is available, Minnesota could easily move up five spots. I would certainly keep an eye on that scenario if the draft board falls a certain way.

If the Vikings stay put at No. 14, USC offensive lineman Alijah Vera-Tucker would be an excellent target. Vera-Tucker aligned at left/right guard and left tackle for the Trojans. After playing left guard as a sophomore, he kicked out to left tackle in 2020. While watching several games, I noted his athleticism, quick feet and sound technique in pass protection. I was also impressed with his agility and movement skills. What's more, Vera-Tucker has underrated power in the running game. He probably projects best as a guard in Minnesota’s system, but certainly has the skills and traits needed to play tackle. He tallied a 9.03 Relative Athletic Score at tackle and a 9.79 output at guard, according to Kent Lee Platte’s database. That type of athletic ability gives him so much positional versatility. Overall, outside of Slater, Vera-Tucker is my favorite fit for the Vikings at No. 14.

Trade back and accumulate more resources

GM Rick Spielman could also explore trading back. In fact, this scenario makes so much sense. The Vikings do not have a second-round pick (traded for Yannick Ngakoue) and may try getting one back. Depending upon which team Minnesota talks with, it is possible a second-round selection could be received as part of trading back. If the Vikings do make this move and obtain more picks, North Dakota State’s Dillon Radunz, BYU’s Brady Christensen and Oklahoma State’s Teven Jenkins are all logical targets in the No. 25-50 range.

Due to the depth and talent in this offensive line class, it may actually make sense to move back. The additional draft capital could be invested into other positions. Ultimately, Minnesota would have more draft flexibility if it can regain its second-round selection. In that scenario, the Vikings could explore drafting a pair of offensive linemen with their first two picks. The team would also have the resources needed to target a defensive player (cornerback or pass rusher) and offensive lineman.

After taking a wide-angle look at possible scenarios, I think trading back provides the Vikings with more intriguing options and flexibility. However, that is completely dependent upon how the first 10-12 picks shake out. An extremely talented player could certainly slide down the board. In that case, Spielman would need to think about staying at No. 14 and selecting a talented wide receiver, pass rusher, cornerback, or offensive lineman.

Finally, the team could work out a trade for Ravens left tackle Orlando Brown Jr. A deal for Brown would likely require a first-round pick swap and future mid-round compensation. If a top receiver is available at No. 14, the Ravens may consider including Brown Jr. in a draft-night package. Spielman and Co. should strongly evaluate the pros and cons of a trade like this.

Brown is a rock-solid pass protector with proven potential at the left tackle position (that's where he wants to be). Many people are currently questioning how Brown’s below-average testing metrics would fit in Minnesota’s zone scheme. However, I’ve been told his private workouts (pre-draft) yielded different results. Brown's film also features strong pass protection fundamentals and flashes of mobility in the ground game. I think this type of move would solidify the Vikings’ future at both right and left tackle. The Vikings could also draft the best player available or trade back again from No. 27. Not to mention, Spielman would have the flexibility to target another offensive lineman in the No. 27-50 range (if they trade back again).

Overall, there are a variety of draft options for the Vikings. Minnesota may explore trading up, moving back, or staying put. However, many of these possible scenarios will be shaped by what happens in front of the Vikings.