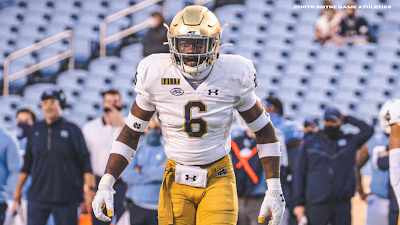 The Vikings should have their eyes on Notre Dame's Jeremiah Owusu-Koramoah. Daniel House explains why he would fit perfectly in Mike Zimmer's defense.

In the modern NFL, it is extremely important to have versatile and dynamic defensive weapons. Broncos GM George Paton mentioned this during a recent press conference. While talking about safety Justin Simmons, Paton said, “It’s a space-and-cover league.” He believes it is critical to have safeties that can play in space, cover tight ends and blitz.

Versatile safeties like Simmons, Jamal Adams, Antoine Winfield Jr. and Minkah Fitzpatrick have changed defensive schemes. NFL coaches and personnel departments value speed, versatility and range more than ever. As offensive weapons become even more dynamic and explosive, coordinators are creating mismatches and getting playmakers in space. Defensive coordinators are responding by prioritizing speed and versatility in the second and third levels.

Many teams, including the Vikings, have used “big nickel” packages in the past. It helps coaches counter offenses that are becoming increasingly reliant upon spacing, mismatches and 11 personnel sets. Every year, coordinators like Mike Zimmer are using creative sub-packages up front and in the backend. However, in order to do that, coaches need dynamic and versatile weapons.

Right now, Minnesota’s safety depth chart is bare behind Harrison Smith. Anthony Harris signed with the Eagles and the Vikings do not have any legitimate replacements. This means Minnesota will likely target a safety during the upcoming NFL Draft.

If Zimmer wants to bring in a dynamic, versatile and rangy chess piece, Notre Dame safety/linebacker Jeremiah Owusu-Koramoah should be on his radar.

Owusu-Koramoah has an extremely unique skill set. Within the Irish’s defensive scheme, he played the rover position (hybrid safety/linebacker). Owusu-Koramoah frequently lined up over shifty slot receivers and also kicked into the box. On film, he fared well in coverage and displayed excellent movement skills. There were many reps where Owusu-Koramoah ran step-for-step with a slot receiver or jumped into a passing lane.

Additionally, he made plays against the run by utilizing his excellent sideline-to-sideline speed and range. If teams ran to the edge, he was chasing the ball carrier down. What's more, Owusu-Koramoah frequently builds up a head of steam and delivers big hits. He also displays sound tackling fundamentals, especially in space. That particular trait is extremely valuable.

After watching Owusu-Koramoah’s film, I feel like he fits best at safety. In fact, Notre Dame converted him from safety to rover. In the NFL, he could align in the backend and kick into the box for creative sub-packages. Owusu-Koramoah also frequently covered slot receivers and flex tight ends in Notre Dame’s defense. In that role, he was extremely successful. Owusu-Koramoah displayed great flexibility and body control while working in coverage. Not to mention, his speed, explosiveness and agility helped him keep pace with dynamic slot receivers. You will see that within the reps I pulled out:

Owusu-Koramoah was also a dynamic threat off blitz packages. Notre Dame defensive coordinator Clark Lea deployed looks that took advantage of his unique physical traits. As a result, Owusu-Koramoah frequently blitzed from the edge and slot.

His speed and explosiveness would open up a world of possibilities for creative NFL coordinators. Teams that want to implement creative sub-packages should be targeting Owusu-Koramoah.

A look at the metrics

Owusu-Koramoah will participate in Notre Dame’s Pro Day on March 31. I am expecting him to put up impressive testing metrics, especially in the explosiveness categories. Once we have those numbers, I will be closely comparing the results with Deone Bucannon, Jaquiski Tartt and Keanu Neal. While watching Owusu-Koramoah’s film, all three of those names popped into my head.

Additionally, his versatility would give the Vikings plenty of future options. For example, if Anthony Barr does not return in 2022, Zimmer could also explore moving Owusu-Koramoah to off-ball linebacker. That type of positional versatility is a major bonus.

What would it take to get him?

Depending upon how his stock fluctuates over the next couple of weeks, the Vikings could trade back from No. 14 and draft Owusu-Koramoah. A move like that would possibly give Spielman enough draft capital to regain his second-round draft pick.

Note: video courtesy of NBC and ESPN (fair use)
Posted by Daniel House at 5:16 PM