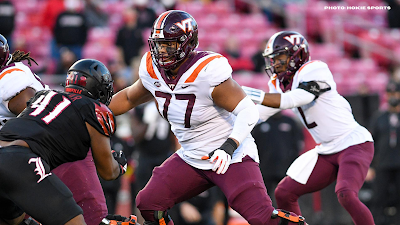 After the Vikings parted ways with left tackle Riley Reiff, the offensive line became a major draft priority. Everyone anticipated Minnesota would spend a high pick on at least one tackle. During the first round of Thursday's NFL Draft, GM Rick Spielman addressed this area and gained additional picks.

Spielman traded No. 14 and No. 143 (fourth round) to the New York Jets for No. 23, No. 66 (third round) and No. 86 (third round). When the Vikings made this move, Virginia Tech tackle Christian Darrisaw was on the board at No. 14. Despite that, Spielman decided to move back nine spots and accumulate more draft capital.

At that time, nobody thought Darrisaw would be available at No. 23. Arif Hasan’s Consensus Big Board slotted the Virginia Tech tackle at No. 14. However, nine picks later, Darrisaw was still on the board. Minnesota accumulated two third-round picks and somehow managed to land one of their top targets.

Darrisaw, a 6-foot-5, 322-pound left tackle, brings size and length to the edge of Minnesota’s offensive line. After making the selection, Spielman mentioned Darrisaw's 34 1/4-inch arms, which rank in the 58th percentile among offensive tackles, per MockDraftable. His length and agility are two specific traits the Vikings liked.

“I think if you see him move laterally, you know, we’re an outside zone scheme and the athletic ability he has for his size [stood out],” Spielman said Thursday. "I think the other thing that stuck out for us is we looked [at] analytics, picked through all of these offensive linemen as well [and] his arm length with his height is typical of a left tackle.”

While watching Darrisaw's film this spring, his quick feet, balance, power and flexibility grabbed my attention. He has a strong anchor in pass protection and does not get pushed around by physical edge rushers. In fact, Darrisaw did not allow a sack or quarterback hit last season, according to Pro Football Focus. On the other hand, as a run blocker, he frequently hit the second level and moved well in space. Spielman mentioned many of those traits while discussing Darrisaw’s skill set.

“I think his movement skills at the second level and the one thing that really sticks out to us was his ability in pass protection and how patient of a player he is,” Spielman said.

Head coach Mike Zimmer also stressed the importance of size and length at the tackle position. He said the team prioritized those traits while evaluating tackles.

"We feel like we’re athletic [on the offensive line], but you end up going against some really big defensive linemen. Especially inside, you get so many of those big guys,” Zimmer said. “Darrisaw’s got real long arms, so that helps him in pass protection against some of these speed rushers.”

Outside of Darrisaw's physical traits, Zimmer highlighted his pass protection and movement skills. He said the coaching staff is valuing all of those things within Minnesota’s outside zone blocking scheme.

“He moves really well in the zone-blocking scheme, has good power. We felt like we needed not just athletic, but we needed some more size with our offensive line,” Zimmer said. “He does a nice job in protection, so we’re excited to get him.”

One of the biggest questions surrounding Darrisaw was his medical background. The Virginia Tech offensive tackle underwent sports hernia surgery in January. While discussing Darrisaw's health, Spielman said it was challenging to gain medical information this year due to COVID-19 protocols. The Vikings' general manager actually received two prospect medical reports about two hours before the draft started. Despite that, Minnesota’s staff felt comfortable with Darrisaw’s medical evaluations.

After grabbing Darrisaw and gaining additional mid-round picks, the Vikings can easily trade into the second round. Minnesota now has four third-round and three fourth-round selections. The Vikings could package No. 66 (third round) and No. 119 (fourth round) and reach the No. 55-58 range of the second round. Spielman said the resources Minnesota gained will give them more flexibility on day two of the draft.

“If you’re the second pick in the third round it gives you a lot of opportunity to do a lot of things tomorrow. It could be we move up, we’ve got more than enough ammunition to move up into the second round, or maybe we move down and get six third-round picks, no, just kidding,” Spielman said. “We’ll see what happens tomorrow.”