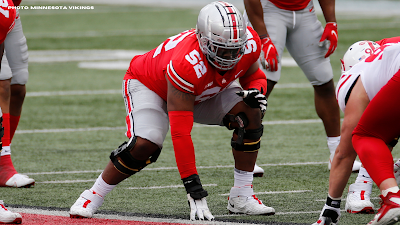 The Vikings added four new players on Day 2 of the NFL Draft. Why did they make these moves? Daniel House shared his thoughts!

What did I think of the Vikings’ day two draft picks? Here are some of my thoughts:

There were many signs pointing to the Vikings drafting a developmental quarterback. Minnesota did a significant amount of research on different passers, including Texas A&M’s Kellen Mond. With Kirk Cousins under contract for just two more seasons, the Vikings are starting to think about the future. Mond has a big arm, but his accuracy is all over the map.

This was on display while I watched him at the Senior Bowl. He would make a flashy tight-window throw, followed by an erratic intermediate pass. In those situations, Mond was either displaying poor mechanics or trying to thread the needle. He just seemed to lack consistency. Nonetheless, he played well during the game and won the MVP Award.

If I was offensive coordinator Klint Kubiak and the Minnesota Vikings staff, I would immediately hire a personal movement coach to work with Mond. He has a very long and distal throwing motion, which impacted his overall efficiency. The Vikings can improve this by investing in next-generation quarterback training. Cowboys quarterback Dak Prescott, a similar style of quarterback, totally overhauled his mechanics by embracing this movement. With that in mind, I think Mond should follow the same exact developmental path.

So why did the Vikings take a chance on him at pick No. 66?

Mond displayed gradual improvement while playing at Texas A&M. The addition of head coach Jimbo Fisher was a big reason why.

Mond’s completion percentage increased every year and ended at 63.3 percent in 2020. Mond also tossed 19 touchdowns and just three interceptions, which was his career-best touchdown-to-interception ratio. For reference, Mond threw 20 touchdown passes and nine interceptions during the previous season. The Vikings’ new quarterback also finished the 2020 season with a career-best 7.7 yards per attempt figure. This gradual improvement is something that impressed Minnesota’s scouts and coaches.

One other notable aspect of Mond’s game is his athleticism. He ran a 4.62 40-yard dash, which correlates with a 9.32 RAS score (out of 10), according to Kent Lee Platte’s data. He posted excellent composite speed metrics and brings some athletic traits to the table. Mond carried the ball 74 times for 294 yards and four touchdowns last season. He certainly has mobility and can add a rushing dimension to the Vikings’ offensive system.

We don’t know whether Mond can refine his mechanics and improve his accuracy. However, if he does, there is potential in his game. The Vikings will monitor his progress after giving him a year or two of development time. Once that happens, we can determine whether this was a big swing for the fences or a miss.

North Carolina linebacker Chazz Surratt only has two years of experience at the position. Surratt was originally recruited as a quarterback but shifted to the defensive side of the ball in 2019. The Tar Heels took advantage of Chazz’s athleticism by playing him in the second level. Surratt posted an 8.46 RAS score, including elite speed and agility metrics. While watching him work at the Senior Bowl, I was impressed with his range and quickness. He shined in the coverage drills and showed the ability to handle tight ends and running backs up the seam. However, the biggest question was his physical strength. He weighs just 229 pounds and must add more physical strength. That is something he can do while redshirting behind Anthony Barr.

With Barr’s modified contract allowing him to hit free agency next year, Surratt could end up becoming his long-term replacement. The Vikings will get him into the strength program and see what happens. Surratt does not have excellent length, but he makes up for that with his athletic ability. The biggest question is whether adding physical strength will compromise some of his athleticism.

Nonetheless, the Vikings are thinking ahead and banking on his developmental potential.

Ohio State right guard Wyatt Davis was an extreme value pick for the Vikings. Davis was widely considered a second-round pick across the league. Instead, he ended up slipping to the third round.

Davis does not exactly fit the mold of guards Minnesota has valued in the past. He is a powerful player with 315-pound size. While studying Davis for my Big Ten coverage, I always noted his power in the running game. He pushed people around, but still had enough athleticism to work in space.

It is also worth mentioning the knee injury Davis battled through this season. Early in the year, he suffered a bone bruise and a “low-level” PCL sprain. After the season, Davis also found out he had an ACL sprain. In an interview with the media, the Ohio State guard said he was experiencing 8 out of 10 level pain while playing through the injury. Therefore, it was pretty hard to evaluate Davis’ film from 2020. Many people believed Davis could be a first-round pick. However, the injury and slight regression in 2020 caused him to slide.

As a whole, the Vikings clearly wanted to add more size on the offensive line. It is something Mike Zimmer repeatedly mentioned during the Christian Darrisaw press conference last night. Vikings Director of College Scouting Jamaal Stephenson also said Zimmer told the scouts he was looking for more size up front. Davis checks that box but still has enough athletic ability to work in a zone-blocking scheme.

Zimmer simply wants a guard that can anchor and hold up against defensive tackles. In recent years, the pocket has been pushed far too much, especially up the middle. The Vikings clearly addressed this problem by adding more bulk at guard and tackle.

Pittsburgh pass rusher Patrick Jones II was the third Senior Bowl player the Vikings selected on Friday night. Down in Mobile, Jones did not fare as well in the 1-on-1 drills, but still displayed all of his upside. His quick first step and explosiveness grabbed my attention during the game. That day, Jones posted 1.5 sacks and got into a passing lane. Jones used that explosiveness to frequently cause disruptions on the field. Over his final two seasons at Pittsburgh, he also tallied 17.5 sacks and 25 tackles for loss.

After watching him move at the Senior Bowl, it was actually quite surprising to see him test poorly. However, it was related to an injury. Jones pulled his hamstring running the 40-yard dash and did not post great testing metrics. The Vikings had an opportunity to meet with Jones at the Senior Bowl and saw him up close. They evidently felt comfortable with his athletic traits and potential upside, despite his testing metrics. Jones' game film and flashes at the Senior Bowl clearly grabbed the attention of Minnesota's staff. Now, defensive line coach Andre Patterson will have an opportunity to develop all of his athletic traits.