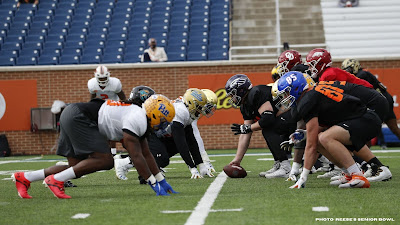 The Senior Bowl always provides prospects with a chance to shoot up draft boards. This year, players have an even bigger opportunity.

COVID-19 safety concerns forced NFL officials to cancel the Scouting Combine. Instead, players will be timed and put through workouts at Pro Days. Pre-draft interviews are also going to be held virtually. As a result, NFL teams are losing multiple evaluation opportunities. It means the Senior Bowl may hold even more weight.

Personnel departments are taking advantage of the opportunity to see players work out in person. Therefore, athletes who shine during Senior Bowl practice may significantly improve their draft stocks.

I had an opportunity to virtually cover this week’s practices. While watching All-22 and television coverage of the Senior Bowl, I was drawn to several prospects on the field. Here is an early list of standouts:

In the modern era of the NFL, it is critical to have hybrid playmakers in your offense. UCLA running back/wide receiver Demetric Felton stresses defenses in a variety of ways. Felton was primarily a running back for the Bruins, but played an all-purpose role in their offense. The Senior Bowl staff decided to provide him with wide receiver reps in practice.

On day one, his crisp routes jumped out. Felton has quick feet off the line of scrimmage and is very explosive in and out of breaks. The rep below featured an excellent release and sound hand technique at the top of the route.

A team can utilize him creatively in their offensive system. His versatility reminds me a lot of Washington running back Antonio Gibson (lighter version). However, Felton will likely play a slot receiver/gadget role for an NFL team. A coordinator with an innovative scheme could take advantage of his unique playmaking abilities.

Western Michigan wide receiver D’Wayne Eskridge has been one of the best players on the field. His precise route running and explosiveness help him gain extensive separation. Eskridge is a master of the details and runs very smooth releases. He has excellent short-range quickness and puts defensive backs on skates. During the first route below, he sells the outside release, attacks inside leverage, gets the cornerback off balance and wipes away contact. Then, he explodes out of the break and makes a dynamic play after the catch.

Western Michigan WR D'Wayne Eskridge stood out during the first Senior Bowl practice. He runs great routes and is very explosive in and out of breaks.

During these reps, Eskridge does a great job of attacking leverage. Also, his hand technique is excellent in route one. pic.twitter.com/KSTdIWWc2w

Eskridge was an electric playmaker for the Broncos. His speed, elusiveness and route running ability can be featured in an NFL system. Additionally, he is an excellent kick/punt returner and provides value in that area. Eskridge’s stock will skyrocket if he continues to play like this in Mobile.

Shi Smith is a very smooth route runner. He glides out of breaks and has a knack for creating separation. Also, when the ball gets into his hands, he creates after the catch. Smith is dynamic in space but still runs very detailed routes to get open. I like how he is patient and attacks leverage. Smith keeps his head still and is very sudden at the top of his routes. At the next level, he is going to thrive as a dynamic slot receiver. Smith also displayed excellent body control while adjusting to a deep crossing route. Many aspects of his skill set remind me of a young Jarvis Landry.

North Dakota State tackle Dillon Radunz was a solid performer during 1-on-1 drills. He has very quick feet and anchors really well. His pass protection technique and footwork are helping him win against some of the best pass rushers in Mobile, including Daelin Hayes. Radunz sinks his hips and bends well to gain leverage. In the run game periods, he has shown the athleticism needed to move in space. The Becker, Minnesota native would fit best in a zone scheme because he is effective at capturing the line of scrimmage, creating movement and getting out in space. Radunz can play both tackle or guard but might fit best inside.

There is always one developmental prospect who gains buzz at the Senior Bowl. East Carolina tackle D’Ante Smith is that guy. He moves extremely well and features 35 1/4-inch arms. Smith has great balance, footwork and recovery speed. As a run blocker, he possesses the speed and length to reach defensive tackles. Smith occasionally hit the second level, found linebackers and opened creases for running backs.

However, his footwork, punch and overall technique were occasionally exploited. During two reps against Houston pass rusher Payton Turner, Smith's footwork and hands were out of sync. Additionally, he could be more consistent at sinking his hips to gain leverage. At times, he has a tendency to play tall. It plagued him in most of the reps he lost. In the NFL, Smith could kick inside or play the tackle position. After watching him in practice, I actually think he may fit well at guard in a zone-blocking scheme.

He frequently hit the second level for run blocking reps. Smith is still improving his technique but has upside. #SeniorBowl pic.twitter.com/yvZ8Yy81fs

Florida State defensive tackle Marvin Wilson suffered a season-ending leg injury, which clearly impacted his pre-draft buzz. Despite that, he has a big opportunity to show what he can do in Mobile. During drills, Wilson’s power, quickness and flexibility stood out. He gains leverage and consistently slides between blocks to create disruptions.

Wilson powers through blocks, but also uses his 82-inch wingspan and 33-inch arms to extend/deconstruct. The Florida State product has the versatility to play multiple different alignments. However, I think he may fit best as a 3-technique in the NFL. Wilson’s flexibility, length and ability to gain leverage are three traits that translate well to that position. If he is tasked with controlling a gap, he will get penetration and force a cutback.

I've been keeping a close eye on Florida State DT Marvin Wilson. He had a solid first day at the Senior Bowl. His hand technique really stood out in drills.

Wilson is quick, powerful and disruptive. I think he would fit well at 3-tech in the NFL. #Vikings pic.twitter.com/XbQcAtzr4m

After opting out of the 2020 season, Levi Onwuzurike has not participated in live football action for more than 400 days. It did not take long for him to shake the rust off. Onwuzurike’s explosiveness and first step instantly grabbed my attention. His athletic traits would fit perfectly at the 3-technique position in a 4-3 scheme. Onwuzurike flashed during the first Senior Bowl session but did not practice on Wednesday.

While watching Tuesday's reps, I noticed he was less successful when he did not get hand position. If this occurs, he sometimes struggles to pull off blocks. However, he was still consistently winning during team and 1-on-1 sessions. A few of the clips below show just how explosive he can be:

Daelin Hayes grabbed my attention throughout practice sessions. While watching him in 1-on-1 and team settings, I noticed his excellent flexibility and bend. He sinks his hips, turns the corner and consistently applies pressure. I’m very impressed with his athletic traits and 80-inch wingspan. Hayes used a blend of power, speed and bend to win off the edge. In the clip below, he bull-rushed, extended and backed up Spencer Brown.

Hayes’ hand technique was very impressive throughout 1-on-1 sessions. He often finished his moves by wiping or ripping through contact. Hayes also used a nasty spin move for a 1-on-1 win. The Notre Dame pass rusher has been arguably one of the most disruptive players on the field.

Minnesota cornerback Benjamin St-Juste’s skill set features a ton of length. He measured in at 6’ 3 3/8”, which translates to a 9.96 relative athletic score (RAS), according to Kent Lee Platte’s database. His height also ranks ninth out of 1,877 cornerbacks (Pro Days and Combine) from 1987-2020. This length shows up on the field. St-Juste used his 80-inch wingspan to jam wide receivers and get into passing lanes.

The former Gophers’ cornerback has excellent lateral agility and recovery speed. In the first clip below, Arizona State wide receiver Frank Darby snaps off his route and comes back to the ball. St-Juste slid past him but had the recovery speed and agility to establish position. He then used his length to get into the passing lane. St-Juste would thrive in a Cover 3-heavy system where he can play zone coverage and break on the football. However, he could be trained as a dominant press-style cornerback, too. St-Juste’s stock will continue to rise after teams see his Pro Day testing metrics. His agility and explosiveness metrics are going to be in the elite tier. I’m mainly curious to see if he can run a 4.5 40-yard dash. If he hovers in that neighborhood, his metric chart will be extremely impressive.

#Gophers cornerback Benjamin St-Juste is veryyy physical. His recovery speed and agility are two major strengths. He also has an 80-inch wingspan.

St-Juste stops on a dime, flips his hips and changes direction quickly. Then, he uses his length to create breakups. pic.twitter.com/3bXE25unPU

Aaron Robinson - CB - Central Florida
Aaron Robinson is another cornerback who is extremely physical and aggressive. He makes it very difficult to release at the line of scrimmage. His skill set also features excellent transition quickness. During one rep, Robinson challenged Florida wide receiver Kadarius Toney off the line of scrimmage. Toney used his speed to separate at the top of his route. However, Robinson swiveled his hips, recovered and got his arm in the passing lane.

The Central Florida cornerback challenged wide receivers by playing very physical all day. Based upon his athletic profile and physical build, Robinson may have the versatility to align at every defensive back spot, including safety.