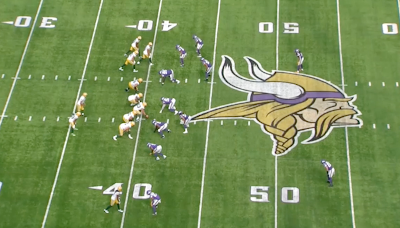 When time of possession and total plays are lopsided, the entire game changes. That is what happened during the Vikings’ 43-34 loss to Green Bay.

Aaron Rodgers picked the Vikings’ secondary apart with quick-hitting passes. This occurred because Mike Zimmer had his cornerbacks play a large amount of off coverage. They were also often shaded with inside leverage. This gave Green Bay’s wide receivers plenty of room to work. Wide receiver Davante Adams frequently ran speed cuts and routes into the flat. Rodgers took advantage of the quick-hitting opportunties and placed the Packers within favorable down and distance situations. Zimmer and the defense didn’t have much of a counter move for this. The defensive backs weren't challenging many of the quick-hitting throws, so Green Bay took advantage of free yardage.

The #Vikings were killed by speed cuts and quick hitters against the Packers. In many instances, DBs were playing off WRs and shading with inside leverage.

Minnesota never really had a counter move for this. Rodgers sliced and diced with quick passes. pic.twitter.com/ur55oRWWwV

Overall, the Vikings’ secondary is filled with inexperience. There were several instances where defensive backs initially had position, but didn’t finish the play. For example, on the deep go route touchdown to Marquez Valdes-Scantling, cornerback Cam Dantzler initially had position, but slowed up while tracking the ball. The Vikings were playing quarters coverage with two-deep safeties and Anthony Harris was reading the inside route. Zimmer even mentioned Dantzler’s positioning during his press conference. This is an instance where he has to finish the play. Dantzler matched the speed of this vertical route, but just needed to get into the passing lane.

There were also moments where technique was poor at the line of scrimmage. In this rep, Holton Hill opens his hips and gives Adams an outside release out of Cover 3. As he’s rotating, Adams gets a step on him over the top. Hill didn’t get tight enough at the vertical extension part of this route. Despite that, Holton nearly used his recovery speed to break up the pass. He just couldn’t quite get there. This is also an insane throw by Rodgers:

Additionally, I pulled an example where Mike Hughes was beat over the top on a go route. Minnesota sent pressure and was playing man-to-man across the board. Valdes-Scantling simply beat Hughes deep. He used a subtle head fake, while Hughes lunged and attempted to get his outside hand on him. Once Hughes swiveled his hips, Valdes-Scantling won by using speed.

Additionally, the Vikings struggled to adequately communicate in the backend. On a deep throw to Allen Lazard up the seam, there appeared to be a miscommunication between Anthony Harris and Eric Kendricks. Harris crept down to help over the middle and Harrison Smith was already playing on the other boundary. It is even hard to diagnose the exact zone coverage they were playing because of where Harris is aligned. This was simply a major breakdown.

These type of coverage mistakes were rather frequent throughout this game. When Green Bay bunched up or ran a mesh concept, the Vikings’ cornerbacks had trouble passing players off. I pulled out two examples (first mesh and second bunch) where the Packers did an effective job of creating confusion in Minnesota’s secondary.

I know the Vikings’ defensive line struggled to get any type of rush. However, it was a direct result of Minnesota allowing Rodgers to quick hit for most of the game. This opened up the Packers’ offense and placed them in favorable down and distance situations. The Vikings have to tighten up in coverage and make adjustments to alter the timing of throws. I would expect we won’t see as much defensive back cushion in this week’s game against Indianapolis.

Entering 2020, we knew the Vikings would have growing pains in the secondary. This is the year Minnesota really needed a preseason. Player development just isn’t the same without in-game reps. After seeing last week’s game, the coaches now have to make all of the adjustments. Zimmer can help players through schematic tweaks, including possibly playing tighter man coverage on the perimeter. Minnesota simply has to challenge more throws and give its pass rush a chance to make plays. When the ball is getting out so quick, it is challenging to apply enough pressure. Of course, the Vikings’ pass rush missed opportunities, but leaky coverage on the perimeter impacted their ability to generate a consistent rush.

Not only that, but the defensive line naturally slowed up due to Green Bay’s use of misdirection. Minnesota’s discipline was tested by a combination of quick passing and pre-snap movement. If you get too far up field or out of position, a big play can occur. Pre-snap looks often slow the pass rush down and create positive mismatches. Matt LaFleur deserves a lot of credit for his game plan and play calling mix.

Up front, I was drawn to several of Jaleel Johnson’s reps. He got interior penetration and did a nice job of using his hands to fight through blocks. In two of the clips below, Shamar Stephen drew double teams and got interior push. Johnson also fought through a few blocks and finished backside run stops. Within the last film clip below, Johnson’s hand technique was phenomenal. He got inside hand position and wiped away center Corey Linsley. At the same time, Stephen fought through a block and got interior penetration. There were still inconsistent moments from the interior of Minnesota’s defensive line, but we saw several flashes. As you all know, defensive tackle play was one of my biggest concerns entering the season. This week, it was hard to assess the performance of these players, especially since the time of possession scale was tilted so much.

Overall, the Vikings need to tighten up in coverage. This could be done by challenging receivers more on the perimeter. It seemed like Minnesota was very worried about get beat over the top. With the experience level of this secondary, it might make more sense to man up hard on the perimeter and provide help over the top. We could see an occasional Cover 2 Man Under look to help the cornerbacks. This would be specifically effective if the coaches are worried about putting defensive backs on a complete island.

Not only that, but given the Colts’ success with screen passes, this type of coverage scheme could be very advantageous. I honestly think bumping and pressing on the perimeter might help the defensive backs considerably. The group is just missing a physical dimension right now. Minnesota has to find a way to alter timing and get the pass rush going. If you aren’t playing any tight coverage, it’s nearly impossible to generate pressure.

At this point, Zimmer is still trying to find out what his young cornerbacks can do. He now has the game film needed to assess strengths and weaknesses.

After seeing last week's game, one thing is certain - the Vikings desperately need to tighten up in coverage.