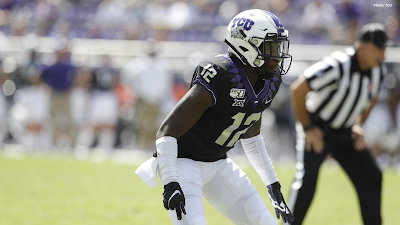 The NFL roster building process is going to look very different this year. Daniel House mentioned several challenges that may arise. Also, which position groups need to quickly click for the Vikings?
by: Daniel House (@DanielHouseNFL)

NFL training camps already look very different this year. The COVID-19 pandemic has altered the way teams prepare for the regular season. Preseason games were canceled and full-padded practices recently started. Without live situations against another opponent, it is harder to assess players.

Right now, coaches are trying to simulate live reps in practice. Vikings offensive coordinator Gary Kubiak said Mike Zimmer has added more live periods for young players. This can help, but still doesn't replace live action against another opponent. During preseason games, coaches have an opportunity to see how players perform against different play designs and opponents. These environments test an athlete’s ability to read and react.

Teams are doing their best to create situational periods in training camp. Without preseason games, practices are going to be very important for players who want to earn a roster spot. Rookies and new acquisitions are currently applying the concepts they learned during the virtual offseason. Players may be ahead mentally, but the biggest question is: how quickly can they physically catch up? As I wrote about before, the protégé effect may benefit teams with excellent coaching. If players were indeed teaching themselves and retaining information quickly, they may play faster in live situations.

Additionally, the roster construction process will be shaped by practice reps, past film evaluations and mental processing skills. Teams will also be creatively assembling a practice squad to account for possible COVID-19 outbreaks. Personnel staffs may end up structuring their rosters in unconventional ways. For example, a certain position may need more depth to withstand possible COVID-19 outbreaks. Several factors must be considered including age, developmental potential and current roster strengths or weaknesses. This year, the Vikings' depth chart is filled with youth.

There is no doubt Minnesota’s coaches will need to develop young players quickly. This is especially critical at several position groups. If the Vikings want to compete this year, two areas must quickly click.

How quickly can a young secondary come together?

The Vikings’ secondary is filled with youth and upside. Minnesota invested high draft picks into Jeff Gladney and Cameron Dantzler. Gladney brings an edge to the Vikings’ defensive back room. He was very aggressive and consistently got into passing lanes at TCU. Gladney has the versatility to play nickel or outside cornerback. Zimmer usually teaches cornerbacks nickel technique early in their careers. It sounds like Gladney is getting reps at both spots during training cap practices.

Mike Zimmer gets the perfect style of cornerback for his system. TCU's Jeff Gladney is very aggressive and has the versatility to kick inside or out. I love his physicality and ability to press WRs. #Vikings pic.twitter.com/Wr5G0EAgg1

Early in camp, there has been a ton of buzz surrounding third-round pick Cameron Dantzler. He brings length and an agressive playing style to the Vikings’ secondary. Dantzler is still polishing his skills at the line of scrimmage (footwork, hands, etc.), but he made a ton of disruptive plays at Mississippi State. He fits the mold of a press-man corner in Mike Zimmer’s defense. Dantzler’s 40-yard dash time caused him to slide down draft boards. However, the Vikings felt confident with data scouts obtained on Dantzler. There is no doubt the young cornerback has plenty of upside. His frame will continue to grow in the future. Dantzler is still learning the technique, but certainly possesses all of the physical traits to fit in this defense. Zimmer has to be excited about the physicality and coverage skills he added through the 2020 draft class. The Vikings will certainly be relying upon Dantzler and Gladney to play a big role this season.

I love #Vikings CB Cameron Dantzler's physicality and length. He is a fluid mover with excellent transition quickness. It will be fun to track his development.

With Dantzler and Jeff Gladney, Mike Zimmer has two very physical and aggressive cornerbacks to work with. pic.twitter.com/2oZMwdzOJf

After spending the past two seasons in the defensive system, I’m expecting cornerback Holton Hill to make a big jump this year. He flashed on film in 2019 and slowly started to pick up all of the necessary technique. Hill possesses fantastic size and athletic metrics at the cornerback position. He will likely start on the outside, but it is uncertain what the combination around him will look like. Mike Hughes has worked at the nickel position and may slide outside in base situations. His versatility and experience are going to be important aspects of the secondary. During his first two seasons in the league, Hughes has battled injuries. This year, the Vikings need him to stay healthy.

Outside of the names mentioned above, second-year cornerback Kris Boyd is expected to play a key reserve role. He shined on special teams and is continuing to master all of the defensive back technique. If injuries strike, the team will ask Boyd to play a large role.

Additionally, fans should keep an eye on rookie Nevelle Clarke. He was a high priority during the undrafted free agency process. Clarke tested well in many of the athletic metrics, including the broad jump and 3-Cone drill. Last year, he broke up 11 passes and grabbed two interceptions for Central Florida. Clarke also played within a system that had the fifth-best defensive back havoc rate (11.4%) in the country, according to College Football Data. He has experience playing tight man coverage and fits the Vikings’ defense very well.

The Vikings’ secondary might be filled with young players, but the team’s backend experience will be pivotal. Minnesota can help the cornerbacks by utilizing more Cover 2 and Cover 4 looks. The experience of safeties Anthony Harris and Harrison Smith will provide the coaching staff with additional scheme flexibility. There may be early growing pains at cornerback, but the position is filled with upside.

Do the Vikings have a true nose tackle?

Entering the 2020 season, the Vikings’ run defense is my biggest concern. There are quite a few question marks surrounding the interior of Minnesota’s defensive line. After Michael Pierce opted out due to COVID-19 concerns, the entire position landscape changed. I was ecstatic about the addition of Pierce in the Vikings’ defense. Last year, Minnesota gave up a handful of chunk running plays each game. This allowed teams to control the ball and wear down the defense. Pierce was a phenomenal fit for Zimmer’s defensive scheme. He had the power to take on blocks and doubles. When this happens, linebackers can flow downhill and make plays. I wrote a detailed breakdown discussing the impact Pierce could have on the Vikings’ scheme.

Now that he has opted out, Minnesota needs to figure out a new plan. Zimmer has indicated the nose tackle position is more of a natural fit for Shamar Stephen. He believes Stephen can take on blockers and adequately fill the role. Due to the recent developments, Jaleel Johnson may get reps at 3-technique defensive tackle. Johnson will have every opportunity to carve out a large role. Early in his career, he has flipped between nose and 3-technique. Based upon past film, I think he’s best suited to play at 3-technique.

Additionally, defensive tackle Armon Watts is a potential breakout candidate. Watts was productive on a limited snap share in 2019. He has the versatility to play both 3-technique and nose tackle in the Vikings’ defense. There is no doubt he can help both as a pass rusher and run defender. If he takes another step forward, he could see a high volume of snaps at nose tackle or 3-technique.

He does a fantastic job of gaining leverage & using his hands to shed. His role will likely expand in 2020. #Vikings pic.twitter.com/iSJzO7JAe1

Hercules Mata’afa added weight and may play a rotational role at 3-technique. However, he provides more value on pass-rushing downs.

Right now, the Vikings don't really have a pure nose tackle. I’m not convinced the team won’t evaluate potential options after roster cuts are complete. If a legitimate option hits the market, Minnesota may consider signing a veteran nose tackle.

Many fans are most concerned about the secondary. I think the Vikings have added enough young talent and upside at that position. Without Pierce, I’m worried about Minnesota’s ability to stop the run and get into long-down situations. When the Vikings can blitz and get creative on third-down, the entire scheme changes. Stopping the run fuels every other aspect of Mike Zimmer’s defense.

Vikings Corner fans, I miss providing training camp coverage this year. It is always one of my favorite things to do. COVID-19 has changed many things, including the ability to cover and attend training camp practices.

I still plan on providing content and analysis throughout the year. In July, I launched Gophers Guru, a new subscription-based website that covers Gopher Football and University of Minnesota athletics. I’ll be spending a heavy amount of time on this project, but Vikings Corner is not going away!