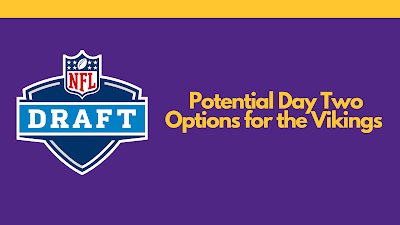 The Vikings filled major needs on Thursday, but day two of the draft is equally important. Daniel House provided a few of his favorite fits for Minnesota!

After completing the first round, teams are evaluating their boards and determining the best strategy for day two of the 2020 NFL Draft. Last night, Vikings head coach Mike Zimmer said the team likes many of the second and third-round targets that are available. Minnesota currently has 12 remaining picks and could package mid-round selections to move up this evening. If the Vikings decide to trade up, there are several logical targets, including two offensive tackle prospects.

I provided options below, including prospects the team may target if they stay put at No. 58.

Although he will likely be an early second-round selection, the Vikings could explore trading up for Houston tackle Josh Jones. If there is a player Spielman wants to move up for, he certainly has enough draft resources (12 remaining picks) to make it a reality.

Jones slid down the draft board and fits Minnesota’s zone-blocking scheme very well. As I noted in a recent breakdown, his overall athletic profile aligns with players the Vikings value at tackle. His quickness, length and agility are major assets in pass protection. Not only that, but Jones has shown the ability to move in space within Houston’s zone-blocking concepts. You can read more about him in my prospect fits piece.


Jones hasn’t reached his full potential yet and would improve his technique under offensive line coach Rick Dennison. Jones falls directly in-between the first and second-tier of offense tackle prospects. From a technique standpoint, I believe he is more inconsistent than “raw.”

If the Vikings want to draft an excellent developmental offensive tackle, Boise State's Ezra Cleveland is the perfect choice. Cleveland is one of the most athletic offensive linemen in the entire draft. He tested above average in the 40-yard dash (96th percentile), three-cone (98th percentile) and 20-yard shuttle (94th percentile), according to MockDraftable. (photo below) 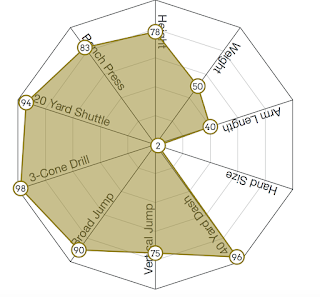 If the Vikings wait to select an offensive tackle, keep an eye on St. John’s product Ben Bartch.

With so many question marks at guard, the Vikings may address the position on day two. Temple center/guard Matt Hennessy has the versatility to play both center and guard in Minnesota’s system. His athletic profile fits what the Vikings are looking for from an interior prospect. Hennessy posted a 8.9 Relative Athletic Score (out of 10), according to Math Bomb's graphic below. 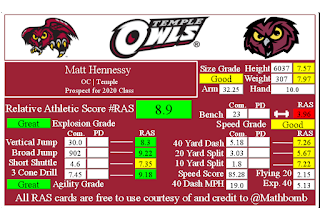 He particularly stood out in the agility and explosiveness categories. His positional versatility is a huge asset and would provide the Vikings with several options. Hennessy is very physical and showed the skills needed to reach defensive tackles. In the All-22 film cuts below, notice how well he moved to block screens downfield, too.

If the Vikings want to address the 3-technique defensive tackle position, there are several day two options. Texas A&M’s Justin Madubuike has been heavily linked to Minnesota during the draft process. The Vikings need to add a versatile defensive lineman who can provide value as a pass rusher and run defender. Madubuike is a very athletic defensive tackle who plays with excellent leverage. This helps him make a difference against the run. I particularly enjoyed the impact Madubuike made when he was stunting and moving laterally. He is the type of 3-technique defensive tackle Andre Patterson could elevate to another level. Madubuike also has the versatility to play multiple alignments in the Vikings' defense.

Recently, I've been watching 3-tech DT prospects. Texas A&M's Justin Madubuike is very athletic and particularly disruptive on the move via stunts. I like how well he retraces rushes.


If the team doesn’t consider Madubuike, other options include TCU’s Ross Blacklock and Missouri’s Jordan Elliott.

What will happen if the Vikings work out a trade for Washington tackle Trent Williams? If the front office needs to move safety Anthony Harris, it’s important to find a replacement. Even if the Vikings decide to keep Harris, Minnesota safety Antoine Winfield Jr. has the skill set to play multiple positions. His versatility, ball skills and instincts fit the profile of a Mike Zimmer defensive back. Not to mention, the Vikings currently have no depth behind Harris and Harrison Smith. Teams will likely target Winfield early in the second round, but with several safeties still on the board, how far might he slide?

I shake my head at all of the plays #Gophers safety Antoine Winfield Jr. made last year. He changed the entire defense. While working on another project, I pulled out clips.

He is a fearless tackler, ball hawk and versatile weapon. These skills will be a huge asset in the NFL. pic.twitter.com/qPjV6xuGgV
— Daniel House (@DanielHouseNFL) March 17, 2020

There are certainly intriguing options at the edge rusher position, including Penn State’s Yetur Gross-Matos and Iowa’s A.J. Epenesa. However, I don’t see the Vikings using draft resources to move up for a pass rusher. Last year, Florida edge rusher Jabari Zuniga battled through a high-ankle sprain, but was productive in 2018. That season, while playing in 13 games, he posted 6.5 sacks and 11 tackles for loss. In 2019, the ankle injury (he returned and re-aggravated it) kept him off the field and clearly impacted his production. Despite playing in just six games last year, he still posted seven tackles for loss and three sacks. With that in mind, if Zuniga passes medical screenings, he has tremendous upside and unique athletic traits. He tested extremely well and has a freaky radar chart (courtesy of MockDraftable). 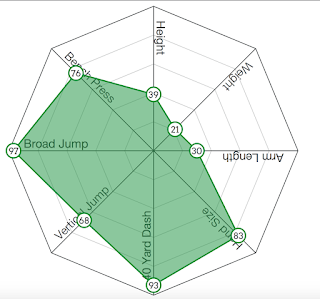 In the bowl game against Virginia, Zuniga caused several disruptions and flashed his potential. He consistently bends the corner and displays his explosiveness.

To follow along with my Top 200 Big Board, click here. I added an additional sheet for Day 2 and adjusted the numbers!

Video Courtesy: ESPN. This video is for educational purposes (fair use).
Posted by Daniel House at 2:35 PM