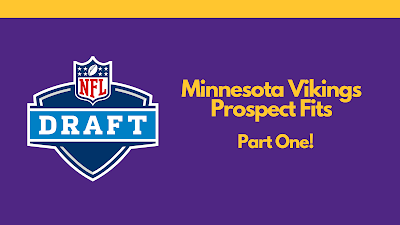 The NFL Draft is nine days away and Daniel House pulled out his top prospect fits for the Vikings!

The NFL Draft is nine days away and teams are currently navigating the challenges associated with a digital draft. As executives, scouts and coaches work from home, technology departments have developed ways to keep everyone instantaneously connected. After Pro Days were canceled, teams searched for methods to gather testing metrics and information. Teams are getting creative to compensate for the unique draft process.

With all of that in mind, there is no question late-round evaluations will be even more difficult. Personnel departments are now setting draft boards and moving forward the best they can.

This year, the Vikings have five selections in the first two days, including a pair of first-round picks. GM Rick Spielman has plenty of ammunition to move up or down the draft board.

While watching prospects, I identified my favorite fits for Minnesota. In this post, I provided options at wide receiver, offensive line and fullback (yes, fullback).

After trading Stefon Diggs, there is no doubt the Vikings need to address the wide receiver position. If the team decides to select a pass catcher in the second or third round, there will be plenty of options. When factoring in the historic nature of this wide receiver class, the Vikings may prioritize other positions with their two first-round selections. If the front office does wait, here are two of my favorite prospect fits:

There are plenty of candidates for the team to consider in the first three rounds of the draft, but Florida wide receiver Van Jefferson is one of my favorite fits. Van, the son of 13-year NFL veteran Shawn Jefferson, decided to graduate transfer from Ole Miss to Florida in 2018. He played two seasons for the Gators and accumulated 49 receptions for 657 yards and six touchdowns during his senior campaign.

After watching the wide receivers in this class, I believe Jefferson is the best route runner in this draft cycle. He does an excellent job of gaining separation against both press man and off coverage. In the first clip below (against press), Jefferson sells the vertical release, brakes on his outside foot, identifies the inside leverage and keeps his shoulders square. The defensive back opens up to the sideline, Jefferson explodes off his back foot and quickly gains separation. When studying his routes, I noticed how well he executed "brake foot-drive foot" to control routes and gain separation. He diagnoses the leverage, slams down his brake foot and uses his drive foot to accelerate and finish the route. Sometimes all a defensive back can do is grab Jefferson because he puts them in extremely unfavorable positions.

You’ll also see a few routes where the defensive back is playing off Jefferson, particularly in the red zone. When this happens, Jefferson is very patient. He closes the gap between himself and the cornerback, drops his hips and snaps off the route. After closing the gap, the cornerback commits, he redirects his route and gains space. During almost every release Jefferson runs, he keeps his head still and shoulders square. By doing this, the defensive back is unable to diagnose the route or get hands on him. Jefferson is patient, sudden and beautifully varies his route tempos.

The Vikings need a technician who can get separation on the perimeter. After trading Stefon Diggs, it’s important for the personnel staff to find a receiver who perfectly complements Adam Thielen. Jefferson’s route running is elite and he definitely has the versatility to align both on the perimeter and in the slot. Outside of the top names, I don’t think there is a better fit for the Vikings’ offense.

In this post, I wanted to highlight players who aren’t getting as much buzz. If you’re in search of a late-round steal, Boise State's John Hightower is your guy. He’s an extremely dynamic playmaker in space and took the top off defenses. Last year, Hightower grabbed 51 receptions for 943 yards and eight touchdowns. After seeing him play against UNLV in October, I instantly put his name in my phone. He is a prospect that consistently impressed me while watching live Boise State games, specifically against UNLV and Hawaii. Hightower has the speed and acceleration to win vertically:

Hightower ran a 4.43 40-yard dash at 6-foot-1, 189 pounds. He brings a nice blend of speed and size to the table. If he can expand and refine his route-running skills, Hightower has so much potential. In the second clip above, he displayed his body control as he adjusted to a back shoulder pass.

Over the past couple of years, I have wanted the Vikings to invest in a spark-plug player. My main goal is to find someone who can thrive in space off reverses, screens and quick slot routes. Hightower checks all of those boxes and adds upside as a vertical playmaker, too.

Not to mention, he’s had success returning kicks and could fill that role in Minnesota.

Outside of Iowa tackle Tristan Wirfs, Houston's Josh Jones might be the Vikings' best draft fit. When analyzing potential draft day scenarios, he may be available when Minnesota is on the clock.

Jones has tremendous athletic traits and played within a diverse zone-blocking scheme at Houston. He certainly needs to improve technically, including with his pass sets. During a few of his pass protection reps, Jones has a tendency to lose his balance/lean and get his feet tangled. When this happens, he often pancakes the defensive end to compensate. Nonetheless, he is a strong pass protector and has excellent lateral agility. The last clip below is one of the best examples of his quickness and agility.

Despite having room to improve technically, his skill set features all of the athletic skills the Vikings are looking for in a tackle prospect. His length, athleticism and agility are just a few of his strengths. Offensive line coach Rick Dennison would certainly love to develop all of those traits. For example, look at how well Jones moves in space. When he's pulling out to the second level or assisting in the screen game, he displays all of his quickness. Jones moves extremely well at 6-foot-5, 319 pounds. He's also very physical and isn't afraid to finish off a defender, especially in pass protection. The Senior Bowl clips below are the perfect example of this.

Jones was a standout performer at the Senior Bowl and held up well against top talent. He projects as a left tackle, but could swing inside. I loved these Senior Bowl reps against North Carolina's Jason Strowbridge. After watching Jones work out, many teams left Mobile impressed with his upside and potential.

It's worth keeping a close eye on Houston OT Josh Jones during the draft process. He had a couple great reps against UNC DL Jason Strowbridge and is making an impression this week. #Vikings pic.twitter.com/HmdWX16zCi
— Daniel House (@DanielHouseNFL) January 23, 2020

Jones certainly needs to polish up his technique, but I firmly believe Rick Dennison can quickly unlock his potential. Jones is a perfect fit and could make an instant impact for the Vikings.

There are always several developmental prospects that catch my eye. At the tackle position, South Carolina State's Alex Taylor grabbed my attention. He measures in at 6-foot-8, 308 pounds with an eye-popping 88-inch wingspan and 36 1/8-inch arms. When looking at his MockDraftable radar chart, Taylor is above average in many critical categories, including arm length, the broad jump and 40-yard dash. 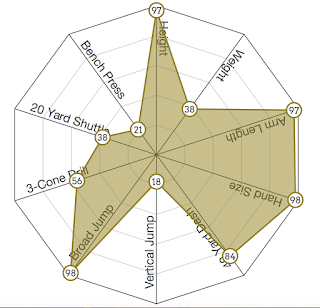 At the Senior Bowl, Taylor showed flashes of potential in 1-on-1 drills. He certainly needs to get stronger, but the length and athleticism can be molded by an NFL offensive line coach. During the Senior Bowl coverage, I was drawn to him after seeing several reps like this:

If you're looking for a developmental tackle prospect, South Carolina State Alex Taylor is your guy. He's 6-foot-8, 308 pounds with 36 1/8" arms and an 88" wingspan. NFL coaches will fine-tune his technique and physical skills.

Teams who are interested in Taylor must invest time and resources into his development. Each year, it's very important to draft late-round offensive linemen with this type of upside. Last year, the Vikings selected Oli Udoh in the sixth round and developed him rather quickly. After seeing Udoh's progression, the team should use another late-round selection on an offensive lineman. When you're trying to build a roster, players like Taylor can significantly improve your future depth chart.

Kyle Murphy is my favorite "under-the-radar" guard prospect in this class. He tore up the FCS and is gaining attention from NFL teams. While watching his film, Murphy's mean streak is the first thing that stands out. He finishes so many blocks and continues to play through the whistle. Murphy's most impressive trait is his lateral agility. He has very quick feet and mirrors edge players well in pass protection. Murphy primarily played left tackle, but also has experience at the center position. At the next level, he is set to kick inside. As a run blocker, he frequently takes excellent angles and gains leverage. Of course, Murphy needs to get stronger to handle the jump in competition, but I love his developmental potential. In the NFL, he can play multiple positions and has the chance to become a solid rotational player. His athleticism and movement skills would fit nicely in the Vikings' zone-blocking scheme.

These are the clips I pulled out (courtesy of Hudl):

The fullback position is a huge part of the Vikings' offensive scheme. Last season, Minnesota spent 45 percent of its total snaps in 22 or 21 personnel, according to Sharp Football Stats. Even though the team signed fullback C.J. Ham to a three-year contract extension, it is still important to have depth. When someone passed along the film of Kennesaw State's Bronson Rechsteiner, I had to dig in. Rechsteiner was the dive back in a triple-option system. Last season, he carried the ball 112 times for 909 yards and seven touchdowns.

Rechsteiner started to gain buzz after posting impressive testing numbers at his Pro Day. He measured in at 5-foot-10, 223 pounds and ran a 4.48 40-yard dash. He also added 35 bench press reps, a 4.22 shuttle and 35-inch vertical, according to the Cherokee Tribune and Ledger-News.

Rechsteiner has an elite Relative Athletic Score (RAS) among players at his position:

Bronson Rechsteiner is a FB prospect in the 2020 draft class out of Kennesaw State.


On film, he popped off numerous explosive runs and displayed his open-field acceleration. Rechsteiner fought through tackles and maintained balance through contact. As the dive-back, he also delivered several physical blocks to spark explosive plays.

I was equally impressed with his receiving skills and ability to create after the catch. His versatility and athleticism align perfectly with the responsibilities of a modern fullback. Last year, the Vikings signed Khari Blasingame as an undrafted free agent, but he was snatched off the practice squad by Tennessee.

In undrafted free agency, Minnesota may consider adding depth at an important position.

Check out his highlights below! (Fun fact: his father is former WWE superstar Rick Steiner):


In case you missed it, here's a YouTube video where I ran through two mock draft simulations with Zone Coverage's Luke Inman: