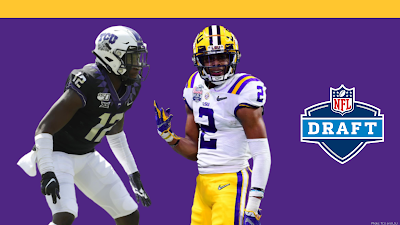 The Vikings filled needs and made value picks during Thursday's first round. Daniel House discusses what wide receiver Justin Jefferson and cornerback Jeff Gladney will bring to Minnesota's roster.

Wide receiver and cornerback were two glaring needs the Vikings had to address early in the 2020 NFL Draft. During the first round, Minnesota’s personnel staff wasted no time upgrading those positions.

As the board took shape, there was a late run at the wide receiver position. This caused several top talents to slide, including Jerry Jeudy, CeeDee Lamb and Justin Jefferson.

GM Rick Spielman indicated offensive coordinator Gary Kubiak had Jefferson graded high on the team's board. At pick No. 22, Spielman said the Vikings narrowed their options to Jefferson and one other prospect.

“We were sitting there and I knew Philadelphia was a threat. There was one other player that we were looking at too,” Spielman said. “There were two good players, so we decided to stay where we were at.”

Jefferson, a 6-foot-1, 202-pound wide receiver, was a dynamic weapon out of the slot for a National Championship program. He has super quick feet and is very explosive, which makes him a difficult matchup for opposing cornerbacks. While watching his film against Alabama, you will notice how he stresses opponents underneath. He has very reliable hands and displayed excellent ball tracking skills throughout his 2019 performances. Quarterback Kirk Cousins will specifically love how he can get open off 15-to-20-yard intermediate routes.

While primarily playing out of the slot, Jefferson had 111 catches for 1,540 yards and 18 touchdowns last season. In 2018, he also aligned outside and gained valuable experience in that role. Spielman said the staff went through his 2018 film to evaluate those skills. Jefferson is only 21 years old and has so much untapped potential. Once he masters all of the technique, I believe he will play both in the slot and outside for the Vikings.

In addition to his dynamic ability after the catch, Spielman mentioned Jefferson’s size and precise route-running. His 92.3 percent contested catch rate ranked first among draft eligible prospects, according to Pro Football Focus. Those skills will allow him to stretch the field and win in the red zone. After trading Stefon Diggs, Minnesota had to find a wide receiver with those specific skills.

Jefferson tested very well in many key categories, including the 40-yard dash (76th percentile), vertical jump (77th percentile) and broad jump (83rd percentile), according to MockDraftable.com. Spielman said the Vikings were monitoring Jefferson, but things really changed when he ran a 4.43 40-yard dash at the NFL Scouting Combine.

"I think the biggest thing that kind of lifted him up through this process was you seen good speed on tape and you seen the speed after the catch, but when he went and ran in the 4.4’s at the combine, that just elevated his status more,” Spielman said.

After selecting Jefferson, the Vikings closely monitored their board. Minnesota ultimately decided to trade pick No. 25 to the 49ers for No. 31, 117 (fourth round) and 176 (fifth round). These additional selections will be key if the Vikings want to trade up in the second or third round. Not only that, but Minnesota could potentially explore using those picks in a trade for Washington left tackle Trent Williams.

After trading back, the Vikings added the perfect cornerback for Mike Zimmer's defense. TCU's Jeff Gladney is a very aggressive and physical defensive back who can press wide receivers on the perimeter.

Which players should be on your radar? Dive into this new YouTube video! #Vikings

He may measure in at just 5-foot-10, 191 pounds, but as I noted in the video above, he is in the 67th percentile for arm length. Zimmer also mentioned Gladney's length and toughness as two key traits.

“Gladney reminded of a lot of guys that have played similarly for me in the past. Very good acceleration. Tough, competitive kid. Wants to challenge receivers. Good in and out of the breaks," Zimmer said. "Long arms, so I know he’s a shorter guy, but I think he makes up for it with his toughness and his length.”

Gladney has excellent transition quickness (a trait the Vikings value) and makes plays on the ball. In Minnesota, he could align at both nickel and outside cornerback. However, Zimmer is already thinking about how the COVID-19 pandemic may impact player development.

“The hard part for a young guy coming in to learn the nickel and the corner, it’s a lot of work, especially with the shortened offseason, it’s going to be harder for him, but I do think he has the skill set to play in there," Zimmer said

The Vikings ultimately left the first round with two impact players at key positions. While doing that, they also accumulated valuable picks for the next two days. I don't think the first day could have gone much better for Minnesota.