Inside the Film Room: Vikings vs. Seahawks 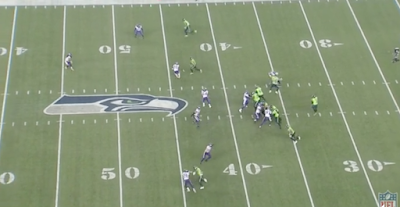 The Vikings and Seahawks traded punches throughout the night, but a dominant rushing attack fueled Seattle’s 37-30 win. Daniel House dives into the tape and analyzes what Minnesota can learn from this game.

When two top NFC teams met for a key December clash, we all knew it was going to be a very physical game. The Vikings and Seahawks traded punches throughout the night, but a dominant rushing attack fueled Seattle’s 37-30 win.

Entering Monday night’s game, I wrote about Seattle’s vertical passing game and the challenges Minnesota’s defense would face. The Seahawks were tied for the third-best average explosive passing play rate, according to Sharp Football. The Vikings decided to do everything they could to limit deep throws from Seattle’s offense.

Head coach Mike Zimmer deployed two-deep safety looks and provided plenty of help over the top. As a result, the Seahawks offense only posted two passing plays of more than 20 yards. One of those plays resulted in a 60-yard touchdown by David Moore. Cornerback Xavier Rhodes thought he had safety help over the top and lost track of Moore. Safety Harrison Smith is down in the box, but at the snap, drops to cover the flat. Anthony Harris was shaded to the opposite hash and Rhodes didn’t have the help he thought would be available.

These are the type of mental lapses that have occasionally plagued the Vikings’ defense this year. Other than two vertical throws, the Seahawks’ passing attack wasn’t the main difference in this game. Since the Vikings decided to frequently play two-deep safety looks, the box was lighter for Seattle. The Seahawks’ coaching staff decided to use a heavy personnel package with six offensive linemen. Tackle George Fant rotated into the unit and provided another level of physicality within Seattle’s ground game. For most of the night, it felt like the Seahawks were in favorable down-and-distance situations. Minnesota’s rush defense allowed 114 yards (5.7 yards per carry) on first down. These positive gains on early downs provided Seattle with a tremendous amount of offensive flexibility.

The Vikings’ defense thrives when it stops the run, gets into long-down situations and can rush the passer. Due to the high volume of successful rushing plays during Monday’s game, Minnesota was consistently climbing uphill. The big area that has to improve is the defense’s run fits and overall alignments. There seemed to be quite a bit of pre-snap confusion, especially in the second-level. Every week, the Vikings’ linebackers frequently shuffle around before the play to create deception. However, in this game, there were several instances where a linebacker got out of a run fit. The heavy personnel package creates additional gaps, which makes defensive discipline even more important. In the clip below, the linebackers appear to be anticipating something based upon the pre-snap alignment. With linebacker Eric Wilson shaded so far up the field, the right tackle has an even better angle to block him out of the play. Again, Seattle is in the heavy personnel package, which features an additional offensive lineman. With the Vikings’ safeties playing so deep, the Seahawks also faced a lighter box.

A similar issue appeared to occur during the run below by Chris Carson. Linebacker Eric Wilson starts cheating playside and gets blocked downhill by Germain Ifedi. Defensive tackle Armon Watts sheds his block, but misses a tackle in the hole. After the play, you’ll notice linebacker Eric Kendricks discussing something with Wilson. It looked like the defense anticipated Carson would bounce the stretch outside, but he bent back. As a result, the second-level was displaced and alignments were inadequate.

The Vikings’ scheme limited the Seahawks’ overall explosive passing plays and wide receiver Tyler Lockett didn’t post a single catch. The coverage bust by Rhodes was one of the most pivotal mistakes of the game and allowed Seattle to grab a 10-point lead late in the third quarter.

During limited snaps, I was impressed with defensive tackle Armon Watts. He missed one tackle, but managed to get his hand in the passing lane to fuel a pick-six by safety Anthony Harris. Watts is quite frequently getting interior push and forcing running backs to redirect. The Vikings’ defense must tune up its discipline in order to get the entire unit back on track. This was especially the case when Minnesota decided to play so much coverage in the backend. With less defenders in the box and more gaps (created by heavy personnel looks), the margin for error went way down.

Although Seattle couldn’t pass the ball as much downfield, they countered by running swing passes to the perimeter. When this happened, the Vikings’ safeties were asked to make a really difficult tackle in space.

Many people have been asking why Minnesota didn’t adjust and play more single-high to help in the box. First, the coaches didn’t want to get beat over the top for explosive plays. Secondly, when they did try a more aggressive look, the heavy personnel package was helping slow pressure or blitzes. For example, the Vikings moved Harrison Smith to the edge with Anthony Harris in single-high. The left side handles Smith’s pressure off the edge, while tight end Jacob Hollister slips out against Anthony Barr. I liked this play design and was drawn to how the fullback jams down, while a tight end slips behind. It created just enough deception to cause coverage issues in the second-level.

The biggest area the Vikings have to patch over the final four games is the run defense. Tuning up the overall discipline and alignments will help the entire unit execute what it does best. If opponents are in second-and-4 situations, you can’t be very aggressive with the pass-rush. When this defense has been clicking in the past, the rush defense has been limiting early-down success. Throughout the 2019 season, there have been just a couple inconsistent moments that seem to define the game. If Minnesota can tune up its execution and discipline, I’m confident they can get back on track defensively. This week, they need to put together a detailed defensive performance at all levels.

A Quick Look at the Offense

I didn’t want to end the piece without quickly highlighting Minnesota’s offense. Quarterback Kirk Cousins continues to play confidently and gave the Vikings a chance to win this game. The coaches have done an effective job of using tight ends in the passing game. Kyle Rudolph made another one-handed touchdown grab in the red zone and was impactful as a run blocker. It’s so apparent how much this team misses wide receiver Adam Thielen, especially on third down.

Opponents can double Stefon Diggs because they don't have another elite talent to cover. There is also less route concept diversity due to the fact Minnesota's offense is missing a premier target. With that in mind, the Vikings have managed to switch things up. This includes using the tight ends and running backs in the passing game. Minnesota has really benefited from screen passes and the offense has deployed them at the right moment. Center Garrett Bradbury has been excellent at getting downfield and finding defenders in the second-level.

All year, an underrated aspect of the #Vikings offense has been the screen game. The OL does an excellent job of getting downfield and finding defenders. Garrett Bradbury has been huge in this category. Look at how well he moves in these clips. pic.twitter.com/8bRHaiD5WM
— Daniel House (@DanielHouseNFL) December 5, 2019


People also aren’t talking enough about the impact of right guard Josh Kline. He has quietly become one of Minnesota’s best offseason acquisitions. Kline fits the zone blocking scheme well and has elevated the play of everyone around him. It’s clear the Vikings felt like nagging injuries were a big reason why Kline hadn’t lived up to his full potential before. Right tackle Brian O’Neill has also quickly developed and delivered a critical block on a toss play near the goal line. He moves so well when asked to pull in the ground game.

Brian O'Neill when he's on the move 🔥🔥. The #Vikings' right tackle has developed quickly and is a textbook fit in this blocking scheme. He has quietly become one of the most efficient pass blockers in the league, too. It's been fun to watch him improve. pic.twitter.com/MufFkyebbz
— Daniel House (@DanielHouseNFL) December 5, 2019

O'Neill has also become one of the most efficient pass blocking tackles in the league. Minnesota’s offensive line is much-improved, but the big key centers around getting Adam Thielen back. He’s currently listed as doubtful for this week’s game against Detroit. If he can eventually return, the Vikings will receive one final boost for the playoff push.