Upon Further Review: The Vikings’ Offense vs. Green Bay 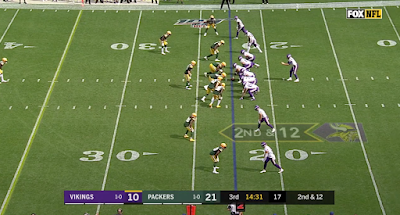 On Sunday, the Vikings dropped a divisional game in Green Bay. Daniel House analyzed the critical mistakes and looked at the team's strong rushing attack.

When the Vikings signed quarterback Kirk Cousins, they envisioned he would control games and make big-time throws in high leverage situations. During Sunday’s 21-16 loss to the Packers, Cousins was unable to step up in an important divisional game. He overshot receivers, struggled on third-down and tossed a horrible fourth quarter interception. Although there were many mistakes throughout this game, Cousins’ performance will be the main storyline this week.

Minnesota was trailing by five points with five minutes remaining in the game. The Vikings’ offense was starting to wear down the Green Bay defensive front. Running backs Dalvin Cook and Alexander Mattison were averaging 6.7 yards per carry on the drive. After a dynamic 14-yard run by Mattison, the Vikings faced a 1st-and-goal situation from the Green Bay 8-yard-line. Instead of running the ball, offensive coordinator Kevin Stefanski called a play-action roll-out. Cousins was 15 yards behind the line of scrimmage, had pressure in his face and launched a pass off his back foot. He threw into double coverage and the ball was intercepted by cornerback Kevin Kevin. It was a poor decision by Cousins, who said he was trying to give Stefon Diggs a chance to make the play. However, when factoring in his off-balance throwing platform, the coverage situation and Minnesota’s success on the ground, this was a head-scratching decision.

During Sunday’s loss, Cousins tossed two interceptions and fumbled twice (one lost). Since 2015, no NFL quarterback has fumbled the ball more than Cousins (44 times). These type of mistakes change the entire landscape of games and put the defense in unfavorable situations. Cousins finished the day 14-for-32 with 230 yards, a touchdown and two interceptions. On third-down, Cousins completed 5 of his 12 attempts for 97 yards, a fumble, touchdown and interception.

There are still moments where Cousins shows off his ability to execute deep vertical throws with placement and accuracy. On Sunday, he launched a deep pass to Stefon Diggs for a 45-yard score. Unfortunately, it was overshadowed by all of the missed opportunities. The entire offense also made mistakes, including two holding penalties (both by Garrett Bradbury) that stalled drives. There’s no doubt Minnesota has to clean up the amount of penalties they are committing. Through two games, the Vikings have been flagged 19 times and many of them have occurred at inopportune times.

When the Vikings faced a 21-point first quarter deficit, the entire game changed. The offense had to pass more to dig out of an early hole. However, they still managed to run the ball with success. Running back Dalvin Cook was sensational and rushed for 154 yards and a touchdown. He was picking up yards after contact and displaying his superb balance, vision and footwork. Minnesota’s rushing attack and scheme have been two of the biggest positive from the team’s first two regular season games.

After running the ball for more than 70 percent of their total snaps in Week 1, the Vikings’ offense showed more balance against the Packers. During Sunday’s 21-16 loss to Green Bay, Minnesota passed the ball for 55 percent of its total offensive snaps. The Vikings also utilized tight ends and fullbacks consistently. With the team’s limited personnel at wide receiver, they haven’t been using many three-wide receiver sets. On Sunday, the Vikings had fewer than three wide receivers on the field for 78.3 percent of their total offensive plays (47 of 60).

At times, they did use tight end Irv Smith Jr. like a third wide receiver, but this only accounted for five of Minnesota’s 20 plays out of 12 personnel. The Vikings could really use a third wide receiver that can stretch the field and take a little attention off Stefon Diggs and Adam Thielen. They need a wide receiver with speed that can stretch the seam and open up some of the route concepts. Below is the distribution of personnel groupings during Sunday’s game against Green Bay:

I broke this down even further to understand which personnel groups were the most effective.

As you’ll see above, quarterback Kirk Cousins had the most trouble when the team was in 12 personnel sets. He was sacked, committed two turnovers and had three overthrows. Minnesota didn’t use much play-action either, which has always been a big part of Cousins’ success. On Sunday, Cousins completed four of his nine play-action passes for 22 yards. He also tossed one interception and scrambled for six yards. In total, Cousins used play-action on 28.1 percent of his passing attempts (9-of-32). Overall, Minnesota called play-action ten times, which equates to 16.7 percent of the Vikings’ total offensive plays.

They have been running the ball well, but haven’t hit on big play-action passes yet. We can expect the frequency to increase in future weeks to capitalize upon the strengths of this team.

In addition, of the team’s 60 offensive plays, Cousins was under center 72% of the time. With the new offensive scheme, Minnesota’s coaches have emphasized putting him under center and moving the pocket by design. However, when Cousins was on the move with boots, free rushers were frequently coming his way.

Cousins had the most success within 11 personnel sets. The Vikings frequently used this package when they really needed to get yardage in long-down situations. Perhaps the Vikings will consider trying to bring in a third wide receiver that possesses speed and vertical ability. It would help open the offense and add another dimension to the passing concepts. The interior of Minnesota’s offensive line also has to improve. On my first review of the broadcast cut, Garrett Bradbury struggled in pass protection and was getting backed into Cousins on a few passing attempts. I plan to break down this area in detail when the All-22 film is released this week.

Finally, the team didn’t use as much 22 or 13 personnel. During Week 1, they ran the ball extremely well out of those sets. Instead, they thrived on the ground when C.J. Ham was on the field. Out of 21 personnel, Dalvin Cook broke free for a 75-yard touchdown. The play was set up beautifully by motion, which drew the cornerback out of alignment. He got too far up the field, Cook cut back and exploited a bad angle by safety Darnell Savage. Prior to Kirk Cousins’ costly interception, the Vikings’ running game was thriving. They averaged 6.7 yards per carry on a nine-play mix of both 21 and 12 personnel.

The encouraging aspect of the first two weeks is how well Minnesota has run the ball. Dalvin Cook has been sensational and the blocking scheme complements his skills. Minnesota’s offense averaged 7.0 yards per play and 7.3 yards per carry, but they still lost the game. This statistic alone shows how undisciplined they were playing.

The defense struggled in the early stages of Sunday’s game, but rebounded. Minnesota’s pass rush was dominant and they rotated defensive linemen frequently. Defensive end Everson Griffen was again impacting plays and performing at an elite level. He is returning to 2017 form, which is an encouraging sign for the Vikings’ defense. Like usual, safety Harrison Smith was making plays all over the field and Jayron Kearse stepped up in the “big nickel” package. Cornerbacks Mike Hughes and Mackensie Alexander are set to return soon, which will help take the team’s defense to another level.

Now, the Vikings have to find a way to bolster the passing concepts and get more out of their biggest investment – Kirk Cousins.