What is fueling the Vikings' rushing success? 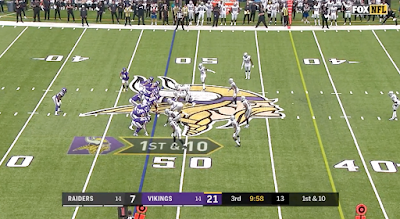 This offseason, when the Vikings hired assistant head coach Gary Kubiak and offensive line coach/running game coordinator Rick Dennsion, they had a vision for the team’s schematic concepts. We waited to see how the zone-blocking scheme would transform Minnesota’s rushing attack. Through three games, early returns have been positive. The offensive line is getting out in space and running back Dalvin Cook is thriving with the plethora of available cutback lanes. After rushing for 213 total yards during Sunday’s 34-14 win over Oakland, head coach Mike Zimmer praised the scheme.

“I think our offensive line – number one, our coaches are doing a good job of scheming. Number two, I think the offensive line is doing a really good job of getting on the right people and creating some space,” Zimmer said after Sunday’s win. “[Cook] doesn’t need a lot of space, because he’s really good at slithering through lanes. Maybe the most impressive thing is toughness in the tackles. He doesn’t ever want to go down, but he’s a physical runner with great speed and home run ability.”

After pooling draft and free agency resources into the offensive line, the scheme is unleashing the complete potential of everyone. Whether it’s stretch plays, inside zone runs or toss plays, the Vikings’ coaches are finding ways to create space for their most explosive weapon. Through three games, Dalvin Cook is the league’s leading rusher. The team has also posted the second-most rushing yards of any team in the NFL. Minnesota’s ground game has been pivotal in the team’s first two victories. Through three games, the Vikings have called running plays on 61 percent of their total offensive snaps.

During Sunday’s game, Kirk Cousins attempted just 21 passes and the rushing duo of Dalvin Cook and Alexander Mattison took over. Cook carried the ball 16 times for 110 yards and a touchdown. Mattison also added 12 rushes for 58 yards and one score. There were several dynamic runs by both Cook and Mattison, including the two clips below. In the first clip, Dalvin Cook finds the backside cutback lane and breaks five tackles. His explosiveness, vision, footwork and ability to hit small creases, makes him very difficult to defend. When you get Cook just a little space to work, he will take advantage. With the type of outside zone plays the Vikings are using, Cook is thriving. They have also done a nice job of setting up running plays with motion to create occasional alignment issues.

Dalvin Cook is not human. On these two runs, he broke eight tackles 😱. If Cook has the smallest rushing lane, he will slide right through it. The vision, feet and explosiveness are off the charts. #Vikings pic.twitter.com/c3BqUSItzR
— Daniel House (@DanielHouseNFL) September 23, 2019

Minnesota is also fueling this success by utilizing a fullback consistently. C.J. Ham has executed many key blocks to spring runs. During Dalvin Cook's one-yard rushing touchdown, Ham kicked out and cleared the edge.


So far, the team’s fullback has played a big role in the Vikings’ offensive scheme. During Sunday’s game, fullback C.J. Ham was on the field for 42.1 percent of Minnesota’s offensive snaps. Again, the Vikings barely used any three-wide receiver sets.

The Vikings also maximized the role of tight end Irv Smith Jr. He had three catches for 60 yards and was frequently flexed out-wide in 12/13 personnel sets. After showing off his versatility, Smith will continue to see his role expand. His skills as a run blocker have been noticeable when Minnesota uses multiple tight end sets. When analyzing his three routes, you will notice he keeps his shoulders vertical for as long as possible at the top of routes. He also sold in-breaking routes and utilized a head-fake to complete routes.


Irv Smith Jr. was more involved in the passing game on Sunday. When Smith runs routes, he does a really nice job of keeping his shoulders vertical. He mixed in a head-fake at the top, too. His run-blocking and versatility have been underrated this year. #Vikings pic.twitter.com/iz8mO3f6bW
— Daniel House (@DanielHouseNFL) September 23, 2019

Now that we’re through three games, it’s interesting to see the variety of personnel groupings Minnesota is utilizing. What we notice is how little the Vikings are using more than three wide receivers. This year, they have lined up with fewer than three wide receivers for 21.3 percent of their total offensive snaps. The coaches have utilized a fullback for 40.2 percent of those snaps. In addition, they have had more than two tight ends on the field for 47 percent of the total offensive plays. With the team’s current personnel construction and scheme, they haven’t emphasized stretching the field with their wide receivers. There will be games where they get behind and are forced to pass more, which tips the scale. Two of these matchups featured a run-first mentality due to quick starts. In the future, it will be fascinating to watch these numbers evolve and change as opponent strength fluctuates.

I was also wondering which sets the Vikings are most effectively running the ball with. When the coaches have used a fullback or more than three tight ends, they have shown the most rushing success. However, across four of these groupings, they are averaging more than five yards per carry.

Next week will be an interesting game because the Bears’ defense is certainly going to take away the running game. When they do, it will force the Vikings to innovate with the passing game. Protecting the pocket will be pivotal against Chicago’s dynamic front-seven. This is the type of game where play-action can be helpful. However, if their ends crash hard like Green Bay did, they may be able to take away many of these looks.

On Sunday, the Vikings more effectively used play-action. It played a role in quarterback Kirk Cousins’ 35-yard touchdown pass to Adam Thielen. On this play, the coaches used a staple concept from Kyle Shanahan’s playbook. I pulled the play diagram from the AFCA and included it below: 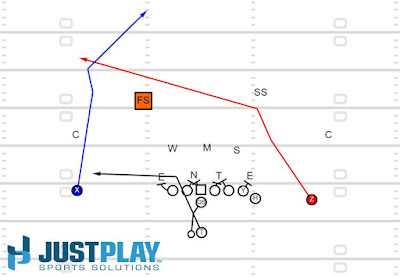 First, they moved the pocket by using a bootleg off play-action. They ran a “Yankee Concept,” which involves a post and deep crossing route. In this play, Adam Thielen runs a post and beautifully sells a corner route. The single-high safety bites over the top on Diggs’ deep crosser and Cousins throws back across the field to Thielen. The linebackers also sucked up on the play-action to clear out the middle of the field.

I loved how Stefanski used the Yankee Concept on this TD. First, they set up play-action and moved Cousins out of the pocket off a boot. The high-low look with Thielen and Diggs creates some deception in the backend. Cousins threw it back across to Thielen for a TD. #Vikings pic.twitter.com/zn4LKTgNeW
— Daniel House (@DanielHouseNFL) September 23, 2019

“The first play-action touchdown that we threw was partly because of the run game, guys sucking up on the run,” head coach Mike Zimmer said on Monday. “When those things happen, typically good things happen in the play-action, which I’ve been saying for many, many years.”

This type of high-low concept is a strong way to utilize play-action and create deception in the backend. Minnesota’s coaches need to continue finding ways to move Kirk Cousins by design. Offensive coordinator Kevin Stefanski dialed up the perfect play call and it was executed well by everyone involved.