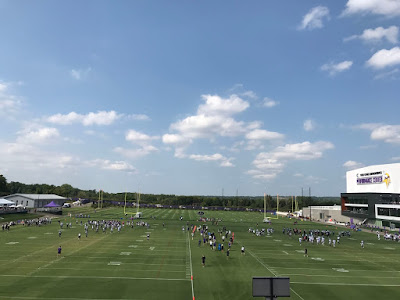 The Vikings report to training camp this week and Daniel House is ready to monitor several key areas. Find out which storylines everyone will be talking about during practices.

Vikings rookies and select veterans are slated to report to training camp on Monday. The first full-squad practice will take place on Friday at TCO Performance Center. Every year, there are specific storylines to monitor during training camp and the preseason. This offseason, the Vikings made a few coaching staff additions and re-signed linebacker Anthony Barr. The roster features continuity on defense, but there are many new faces at key spots.

This year, fans will notice fundamental changes to the scheme within all three core units. A relatively new offensive staff is joining the team and many eyes will be focused on scheme changes. On defense, there are important depth additions to watch in live practice sessions and preseason games. In addition to those changes, new special teams coordinator Marwan Maalouf will likely have a totally different coaching approach.

All offseason, we have been discussing the potential impact of assistant head coach/offensive advisor Gary Kubiak. Yes, he’s sure to influence the way the offense is structured, specifically from a running game standpoint. However, Kevin Stefanski is calling the plays and will be applying all of his experience across a variety of systems. The emphasis upon zone-blocking, play-action and fullback usage are just a few areas where change may be noticeable. This offense is going to feature a melting pot of concepts, but it’s clear there is a collective vision for how the staff wants to approach the system. During training camp, we’ll see some of the scheme changes and new additions. First-round pick Garrett Bradbury will be a key part of the offense because of his movement skills and football IQ. Pat Elflein is also returning to guard, a position he played for two seasons at Ohio State. The personnel changes, along with scheme modifications will have the biggest impact on the offense’s ability to improve. Outside of the offensive line, the wide receiver room will feature plenty of competition. Young players like Chad Beebe, Jordan Taylor, Dillon Mitchell, Olabisi Johnson and Davion Davis will be battling for final spots on the roster. For several of those players, special teams contributions will be key to separating from the pack. Not to mention, the Vikings could decide to eat dead cap and cut former first-round pick Laquon Treadwell. It seems unlikely, especially considering Minnesota would face a $2.5 million dead cap hit to part ways with Treadwell. However, if a young player breaks out in training camp and the preseason, it could be considered.

There are a few areas to monitor on the defensive side of the ball, too. From a scheme standpoint, it’s worth wondering how the coaching staff may use linebacker Anthony Barr. After signing Barr to a big contract this offseason, will they consider using him more frequently as a pass rusher? If the Vikings want to get really creative, they could deploy defensive end Stephen Weatherly in a stand-up role. Not many people realize the type of versatility Weatherly features in his skill set. At Vanderbilt, he was used off the edge consistently. Perhaps the Vikings could utilize him differently on pass rushing downs. It would allow them to keep the core defensive line on the field, while taking advantage of Weatherly’s unique athletic skills. We probably won’t see many of these wrinkles in camp, but watching positional drills can help us understand how certain players may be used.

The secondary is filled with a blend of youth and experience, which should help new players like cornerback Kris Boyd transition to the next level. Cornerback Mike Hughes is also recovering from an ACL tear he suffered in mid-October. It’s unclear if he’ll be ready for camp, but one can expect the Vikings will be cautious about his recovery.

Out of all the position groups on defense, the biggest question mark is how the three-technique battle will play out. The Vikings signed former draft pick Shamar Stephen, who is known for executing the fundamentals. He is more of a hybrid nose tackle and three-technique, so we’ll see if the coaching staff is comfortable starting him at three-technique. If not, there could be a rotation between Stephen, Jalyn Holmes and Jaleel Johnson. In addition to those names, Hercules Mata’afa is someone who gained positive buzz during mini-camp and OTAs. Mata’afa missed last season with an ACL tear and added the necessary weight for a move to three-technique. Teams wondered whether he’d play linebacker at the next level because of his limited size. However, due to his athletic skills and new playing weight, he may be a sleeper to watch at the three-technique spot. In camp, it’s worth seeing how they rotate at the position because it may signal they are willing to take a “three-technique by committee” approach in 2019.

It might sound odd, but people probably aren’t talking enough about the potential shift in approach among the special teams units. During his career, new special teams coordinator Marwan Maalouf has worked with several top-tier minds, including John Harbaugh and Darren Rizzi. During his most recent stop, the Dolphins had one of the top punt-block percentages in the NFL. Their twist schemes were very difficult to handle and caused chaos. While Maalouf was an assistant in Miami, the Dolphins finished top-five in punt-block percentage every year, including a first-place finish in 2014 (4.92%). Collectively, during his one season as special teams coordinator with the Colts, his units ranked 12th in special teams efficiency, according to Football Outsiders.

Maalouf has emphasized the importance of creating time in practice to teach fundamentals. Head coach Mike Zimmer even repeatedly mentioned how impressed he was with the strides they made on special teams during spring practices. One can expect Maalouf will approach the special teams sessions differently, especially since the Vikings need to take a big step across units. In 2018, there were many situations where the team was unable to play complementary football due to smaller special teams errors. Those mistakes have to be cleaned up in order for the team to be completely balanced.

The Vikings also hired former Chargers kicker Nate Kaeding to consult with the specialists. This gives the players another hands-on coach to evaluate technique. Roles will likely be divided to provide more 1-on-1 instruction. This is even more critical when the coaches must evaluate battles, such as kick/punt returners and long snappers. With young players scattered throughout the back half of the depth chart, player development will be a necessity to achieve maximum potential. Overall, there’s no doubt, special teams will be one of the most underrated areas to monitor in training camp.