Upon Further Review: Vikings vs. Seahawks 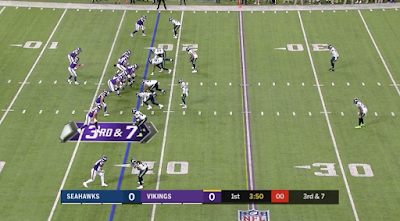 The third preseason game is the last time to see starters in action before regular season matchups begin. Daniel House breaks down the tape and discusses what stood out in his eyes.

After a disappointing offensive performance in last week's preseason game, the Vikings' offense had one final dress rehearsal to prepare for the Sept. 9 regular season opener vs. San Francisco. Offensive coordinator John DeFilippo said he needed to do a better job of play-calling. It's a balancing act because the Vikings also play Seattle in the late stages of the regular season. In this game, the scheme heavily emphasized underneath concepts and intermediate routes.

Quarterback Kirk Cousins went through his progressions and was often hitting his checkdowns. In most of the scenarios, it was the correct read and he was taking what was available. There are still occasions where the timing and ball placement are a work in progress, but those areas should improve with more reps. The team's running backs had a combined 54 receiving yards in the first quarter alone. This is something that John DeFilippo heavily emphasized during his stint as an offensive coordinator for the Cleveland Browns. In the clip below, Kirk Cousins takes advantage of a mismatch as Latavius Murray runs underneath on linebacker Bobby Wagner. These are the type of plays the Vikings' running backs will be tasked with making during the regular season.

The Vikings also ran 13 personnel frequently with C.J. Ham lined up as a third tight end. Ham will likely play a large role in the Minnesota offense because of his versatility. He not only has improved as a lead blocker in running formations, but is a receiving threat in the flat. Ham has made plays after the catch because of quickness, power and burst. He has a subtle ability to win battles in space against linebackers because he is very tough to bring down. When injuries struck last year, he managed to fill in admirably at the tight end position. The clip below is an example of the value he can provide in the receiving game:

Many eyes were on the offensive line to see how the current starting nucleus performs with Mike Remmers and Rashod Hill in the lineup. Neither of them played very long, and as a whole, the entire unit was up-and-down. On a few occasions, the play-script emphasized getting the ball out quick underneath via mesh concepts and quick hitters. There were moments where Rashod Hill struggled, including the clip below. As Mike Zimmer has indicated before, there are moment of brilliance and inconsistency, specifically with his footwork.

There were also a few poor reps inside, including from Tom Compton, who has been inconsistent this preseason. He has been more sound in the running game and less impressive in pass protection. The rep below is an example of pressure forcing Cousins to get rid of the ball quickly.

Among the starters up front, Cornelius Edison has been the strong performer. He was fantastic for numerous reps in the running game and has been fundamentally sound with his hands and leverage. I tracked all of his pass blocking reps and I did not count a single loss. The Vikings could decide to move him to left guard when Pat Elflein returns. The big question mark is whether he has enough movement skills as a second level run/screen blocker. I think he has just enough of the skills and is an extremely reliable backup center when Elflein is back in the lineup. Some of the other pressures associated with the first-team unit were the result of unchecked pressures and play design, too.

In the second team units, it was a tough evening for both Aviante Collins and Danny Isidora, who more specifically struggled in pass protection with the second-team unit. The only second and third-tier player who continues to string together positive reps is Brian O'Neill. He is still adjusting and had his moments, including a rep where he was badly beaten by Erik Walden. It again is the "three positive, two negative rep" formula right now. The flashes of potential are there, though, which is certainly encouraging.

As a whole the second/third-tier units were very disappointing. Trevor Siemian struggled to get the ball out and was inadequately going through progressions, but the pocket was also terrible on numerous occasions. Siemian is having a tough time making all the throws in the system and has struggled to feel pressure and keep his eyes down the field.

At wide receiver, Laquon Treadwell was one of the most improved players in training camp. There are a few improvements that stand out when you watch him closely. The first is his ability to get separation with quickness in-and-out of his breaks. In the past, against top corners, almost every catch opportunity was contested. Treadwell has also improved his ball tracking skills. In the past, he had a tendency to catch passes inside of his frame. Those are a few things you can notice when you watch him run routes. This was one of the first games where he has applied some of these improvements:

#Vikings WR Laquon Treadwell managed to get more separation in training camp practices. I felt like he looked quicker in-and-out of breaks. This is the first time he's really applied it to a game. I think Kirk Cousins will find him often this year. pic.twitter.com/rqRw4VDfRe

Sometimes it's just amazing to see what Stefon Diggs can do as a wide receiver. In this game, he ran a fade up the sideline and made an extremely difficult (and late) adjustment to a back shoulder pass from Kirk Cousins. It was a beautiful throw and catch with excellent ball placement to the outside shoulder. The next-level things Diggs can do because of his body control are very impressive.

Stefon Diggs is just unfair. Look at this late adjustment to bring in the back shoulder throw. His body control is unreal. #Vikings pic.twitter.com/d94swJRFxd
— Daniel House (@DanielHouseNFL) August 25, 2018

On defense, Eric Kendricks and Anthony Barr made numerous tackles and coverage plays in space. They both can cover so much field and have the range and tackling ability to stop teams from isolating their playmakers in space. In the clip below, Russell Wilson tries to find running back Mike Davis up the sideline, but Kendricks is running step-for-step and knocks the pass away. He is one of the players who makes things so difficult for opposing defenses because of his versatility.

I've been spending so much time talking about how Danielle Hunter has become more nuanced and less robotic as a pass rusher this offseason. However, one of the main areas he has improved is against the run. There were numerous plays in camp where he managed to shed or move down the line of scrimmage to create a run stop. Last night, he used his hands/strength to shed and complete the tackle for loss. This addition to his skill-set will help him become more well-rounded and dominant as a player.

The same can be said for Tashawn Bower, who was arguably one of the most impactful players in this game. He was fantastic at getting down the line and making run stops. This is a welcome addition to his skill-set as he evolves from being a raw rotational pass rusher.

#Vikings DE Tashawn Bower has not only become more nuanced as a pass rusher, but his improvement as a run defender was on display last night: pic.twitter.com/LDlztHEJ6T
— Daniel House (@DanielHouseNFL) August 25, 2018


One of the main areas where the Vikings' defense struggled was against the run. If you followed me on Twitter, I was discussing how Seattle was attacking the Vikings with a trap play. The guard was pulling down and attacking Sheldon Richardson in the running game. The two big gains the Seahawks had in the running game were the result of the quick trap play. Mike Zimmer addressed this after the game and said he could tell Seattle game planned to use this running concept against the Vikings. This is one of the things that often happens during the preseason as teams try different concepts and schemes in an unofficial game. In order to fix this, Richardson will need to do a better job of spilling to attack the blocker from inside out.

Mentioned it at the half last night, but the #Vikings were getting attacked by Seattle via the trap game. Zimmer brought it up after the game and said they were targeting Sheldon Richardson with it. pic.twitter.com/01blXJrAFm
— Daniel House (@DanielHouseNFL) August 25, 2018

Last week, the Vikings were obliterated in the screen game. It's likely they spent the week of practice working on recognition and staying in lanes to make these stops. They were only tested once, but Eric Wilson did a great job of recognizing the running back would be slipping out to set the screen. Last week, linebackers were getting blocked and unable to pull off and make a play. This was an excellent improvement:

Mike Boone has started to separate himself in the chase for the No. 3 running back job. He was fantastic in the receiving game and popped off numerous runs where he showed off his burst, and ability to pick up yards after contact. In the clip below, he is patient, slows up and makes a great jump cut to redirect his run in space. His testing metrics were fantastic, which fits the mold of running backs the Vikings value in their scheme. Boone is showing he can be a complete third down running back because of his receiving skills and improving pass protection technique, too.

The other player who is starting to make a strong case for a roster spot is undrafted rookie wide receiver Chad Beebe. As multiple players continue to miss time with injuries, Beebe is the one receiver on the field who continues to shine. One of the things I loved about Beebe during training camp was his quick feet. His starts and short range quickness are what separate him from other wide receivers. He is really tough to cover out of the slot because of it. His patience and technical ability out of breaks are starting to improve, too. This is certainly a great time to continue performing well with the No. 4 and 5 wide receiver spots up for grabs. His role on special teams, combined with his skills at receiver, should be enough for him to lock up a roster spot. If not, a team might be willing to take a chance on him......(looking at you, Bill Belichick).

Beebe wasn't done for the night and made the biggest play of the game. Quarterback Kyle Sloter flashed all of his athleticism and ability to extend plays as he escaped from the pocket. He kept his eyes downfield and fired a rocket to Beebe for a touchdown. The pass was delivered with a little zip as Sloter flashed all of the arm talent he has at his disposal. His past tape showed how he can throw effectively on the run. During his action in the fourth quarter, Sloter managed to escape collapsing pockets, find his receivers and make the throws. There were moments in camp where Sloter looked like he was still trying to acclimate with the system. Last night was the first moment where he looked very comfortable and flashed all of his potential. He certainly has improvements to make mechanically, but the flashes of raw ability should leave people really excited to see how he develops.