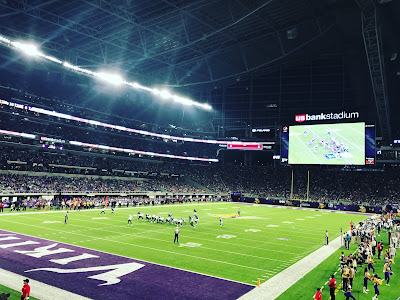 With one final week of preseason action on Thursday night, it's the final chance for players to claim a roster spot. Daniel House discusses where position battles are still intense as roster cuts loom.


Just because starters won’t play, doesn’t mean the fourth preseason game isn’t important. When players are fighting for a roster spot, every ounce of tape can be critical. It doesn’t mean they’ll do enough to make the Vikings’ 53-man roster, but perhaps they’ll catch the eye of another team. This year more than ever, there are several spots up for grabs due to poor special teams play in the first three preseason games. If a player can not only provide value at their position, but contribute on special teams, it might be enough for them to claim a roster spot. As the Vikings travel to Tennessee for their final preseason game, here are a few position groups where battles are ongoing.

Linebacker
Outside of the top four players -- Eric Kendricks, Anthony Barr, Ben Gedeon and Eric Wilson – the remainder of the depth chart is uncertain. Antwione Williams and Reshard Cliett have been rotating into the mix, but they’ve both just shown small flashes. Williams is a more effective pure blitzer, while Cliett is a rangy tackler with more upside on special teams. Perhaps the team will decide to keep just four linebackers, while placing Cliett on the practice squad. With the addition of George Iloka and the potential to use him or Andrew Sendejo as a hybrid linebacker in sub-packages, it could help the Vikings keep a fifth safety like Jayron Kearse for special teams purposes. In addition, Kentrell Brothers is suspended for the first four games and could be activated for Week 5, if the Vikings feel they need more depth. Outside of these options, the team may consider signing a veteran who is waived during roster cuts on Saturday. However, maybe one of the current candidates will make a strong impression in Thursday’s preseason game.

Wide Receiver
The top-three wide receivers are set, but outside of that, the picture is less clear. When Adam Thielen was dinged up in practice, Kendall Wright reportedly was taking reps as a starter. Wright hasn’t shown much in training camp or the preseason, so this could be a situation where they just want to see as many reps from him as possible. Stacy Coley, Brandon Zylstra and Tavarres King have all been injured at some point, which opened the door for Chad Beebe to make a little noise. Beebe has put together an impressive preseason, but has missed portions of practice this week due to injury, as well. At this point, Wright is the one wide receiver who hasn’t missed time with injuries. There will be plenty of players rotating into the mix on Thursday as the final two spots are still up for grabs.

Defensive Backs
Is this the year where Marcus Sherels doesn’t make the team? He’s been slowed up by a hamstring injury this week, but the team really values his versatility. Undrafted rookie Holton Hill has been clearly adjusting to new technique at the next level, but his upside is extremely high. The team would certainly lose him via a waiver claim, so special teams play could dictate how other position groups are structured. If the team wants to keep Jayron Kearse, they’ll need to play with four linebackers or release Sherels. As discussed above, I think the four linebacker scenario makes the most sense for this team, especially considering the current talent they have at the position.

Watching the trenches
With the acquisition of interior swing-man Brett Jones from the New York Giants, the Vikings significantly upgraded their offensive line depth. Jones will likely see a little action on Thursday and could start at center if Pat Elflein is unable to return. It will be interesting to see whether he receives reps at both guard and center. Cornelius Edison has performed well and has continuity with Kirk Cousins at center. Left guard Tom Compton has been more inconsistent and Jones could potentially push him for playing time. The Vikings could still add another versatile tackle via trade or waiver claims to provide more certainty up front.

On the defensive side of the ball, Ifeadi Odenigbo has been fantastic throughout training camp and the preseason. Will the team keep him on the 53-man roster because of his versatility to play inside or on the edge? Based upon the performance of the defensive linemen, it feels like keeping ten players is the most realistic scenario.


Mike Boone has been the clear-cut top performer in the No. 3 running back competition. He has flashed his ability to create additional yardage after contact and has reliable hands in the passing game. Boone is a well-rounded back who can enter on third down and provide value. Roc Thomas dazzled in the Vikings’ first preseason game, but hasn’t played much since. The team will likely try to slide him onto the practice squad, which could be a challenging task. With the chance Latavius Murray doesn’t return next season, it would be huge to keep both Boone and Thomas in some capacity. At this point, Boone is the leader, but Thomas could put together one final strong performance on Thursday before roster decisions are made.
Posted by Daniel House at 11:56 AM