Vikings vs. Seahawks: Players and Battles to Watch Closely 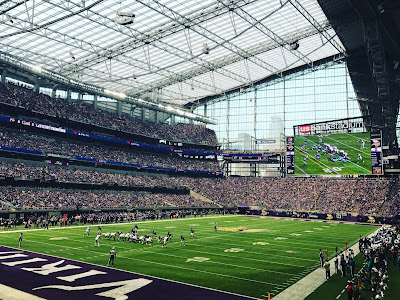 Friday night marks one last dress rehearsal for starters as the Vikings host Seattle at U.S. Bank Stadium. Daniel House provides a few areas you should be watching closely during the third preseason game.

Friday night marks one last dress rehearsal for starters as the Vikings host Seattle at U.S. Bank Stadium. After mustering just 33 net yards in four total drives, the first-team offense will be trying to continue developing continuity. There were a variety of factors which impacted the team’s ability to have success offensively. Play-calling, timing issues and offensive line play are just a few of the factors. With the starters playing into the second half, this will be the best time to tie up loose ends before the Vikings kick off the season against San Francisco on Sept. 9.

During the third preseason game, here are a few things you should watch closely.

Offensive timing and continuity
After a disappointing performance in last week’s preseason game vs. Jacksonville, the first-team offense will be trying to find more continuity in the third preseason game. The timing, route concepts andplay-calling were oddly out of sync last week. Offensive coordinator John DeFilippo said he has to do a better job and will have a chance to experiment one final time before the regular season begins. Quarterback Kirk Cousins said this game will provide a good indication of where the team is at offensively. A first half sample size is going to tell us more about the current state of the Vikings’ offense. With Mike Remmers and Rashod Hill expected to return, it will paint a clearer picture of where the Vikings are at up front, too.

The No. 3 running back battle

One of the most intriguing battles of training camp and the preseason has been the No. 3 running back job. With Roc Thomas and Mike Boone both showing flashes, the final two preseason games are going to be important. However, I think Boone has the best body of work and is starting to separate himself. His testing metrics and upside are off the charts as a runner. In a recent podcast, NFL.com’s Daniel Jeremiah talked about how his explosiveness stands out on tape. He added that two personnel executives in the league were gushing about what he brings to the table. If the Vikings try to place Boone on waivers, there’s no way he will make it to the practice squad. I think he could be used in a unique fashion within the Vikings’ offense because of his above average receiving skills and yards after contact ability. Perhaps Boone will get a few opportunities with the starters to see what he brings to the table.

The depth spots at wide receiver
The battle for depth spots at wide receiver is far from set, which is slightly surprising. Veterans Kendall Wright and Tavarres King haven’t done much to separate themselves in the race. Also, Brandon Zylstra has missed the preseason with an injury. He is expected to return in this game and will need to show he is worthy of a roster spot. Outside of those names, Chad Beebe is the only other player who has made a splash. He has been effective out of the slot and separated himself as a contributor on special teams. The door is open for a few of the above players to carve out a roster spot with a strong finish to the preseason.

Eyes on the defensive line
The defensive line group might be one of the toughest positions to cut in early September. With a strong charge by Ifeadi Odenigbo last week, the competition has become more intense. Tashawn Bower returned to practice and is going to challenge Odenigbo and Stephen Weatherly in a crowded position group. There’s a remote chance the team will be able to keep all three, along with rookie Jalyn Holmes. However, if one player shows more potential down the stretch, it could impact how the coaches and front office staff view the current depth construction. Who will mix into the rotation first? It will give us a hint as to how each player is currently viewed.

A look at Cook and maybe Iloka
Running back Dalvin Cook is expected to play in his first game since suffering a torn ACL last October. He will likely see a very limited role, but the coaches want to take off the training wheels before regular season play begins. Cook has looked extremely explosive and fresh in camp as he makes a return to the Vikings’ roster. It will be interesting to see one of the team’s most important weapons in the offense for the first time in 2018.

The Vikings signed safety George Iloka this week to bolster the team’s secondary depth. He hinted at seeing some time in this game, but his role will likely be small. Nonetheless, it’s a chance to see how he looks in the second-team defense. It seems like it isn’t possible we’ll see him mix into the first-team unit, but all eyes will be on Iloka to see how he’s used.
Posted by Daniel House at 11:23 AM