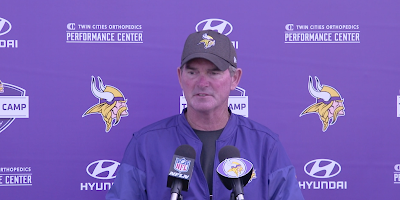 The Vikings will host Jacksonville for joint practices on Wednesday and Thursday. Find out what both teams hope to gain from competing against one another.

When the Vikings host the Jacksonville Jaguars for joint practices, the focus will be about getting better and competing at a high level.

Head coach Mike Zimmer and his players are trying to learn from the scheme and playing style of a high-caliber AFC opponent. Many of Jacksonville’s defensive concepts will mirror teams the Vikings are playing against this season.

“Well they’re a four down front, but they’re different defensively,” Zimmer said. “Their defense is very similar to Seattle, San Francisco, a lot of the teams we’re going to play this year. Fast, their defensive line I think led the league in sacks last year. They were second in the league defensively. They’re pretty darn good.”

The main goal of these practices is to compete and improve, while avoiding the fights that have occurred during other joint sessions across the league. Zimmer met with the Jacksonville coaching staff and said a committee of 12 players from each teams will talk before the Wednesday afternoon practice session.

“Jacksonville, Coach Marrone and myself and the rest of our team, we just really don’t want to end up being on TV like some of these other things that have been going on,” Zimmer said. “We just want to go out here and get some work done and try to get each of us better.”

Wide receiver Stefon Diggs echoed the same message and finds value in learning from a quality opponent like the Jaguars. Diggs spent time watching film to study tendencies and will speak with Jaguars players about things they see on the field.

With edge rusher Dante Fowler and cornerback Jalen Ramsey not making the trip due to suspensions, Diggs won’t have the chance to line up against one of the league’s top young corners. However, the collective unit is one Diggs is looking forward to practicing against.

“Yeah, [Ramsey] is a great corner. We were looking forward to going against him. All those guys in the backend. They’ve got a good secondary,” Diggs said. “On tape, they look great as far as like last year and how far they went, they went just as far as us.”

The Jaguars called Mike Zimmer to explore the possibility of practicing together during training camp. Zimmer liked the idea of playing against a high-quality team with a scheme similar to opponents the Vikings will be preparing for this season. The outcome of this practice will determine whether Zimmer explores these opportunities again in the future.

“I like preparing like we prepare usually, but this might be a good little rest bit of how we’re doing this. If it does and people act the right way and do the right things, then it might be a really good thing and we might continue to do it,” Zimmer said. “We are definitely going to pay attention to what they’re doing and how they’re doing things. We can always learn and figure out a better way to do stuff.

The players will be setting the tone on the field, one which Stefon Diggs said will be all about improving and respectfully competing.

Zimmer is seeing an improvement from tackle Brian O’Neill
The Vikings have slowly been developing rookie offensive tackle Brian O’Neill. Over the past few sessions, his technique has become more consistent. Mike Zimmer was asked about how much O’Neill has progressed since arriving for organized team activities. Zimmer noted O’Neill’s improvement over the past few days.

“When we came out here in the spring and we kept the rookies out longer, that was a process for [O’Neill], but I think it’s really starting to help. Yesterday and the day before, he’s had a couple really good days of practice on some of the things he was doing in the rookie camp that we’ve been trying to correct,” Zimmer said.

“I think that to me has shown a lot of improvement,” he added. “He still has a ways to go on some of the things. He’s really, really good at getting in the second level in the running game and obviously there’s some other things he has to work at, but I’ve been impressed with how he’s improved in some of the pass protection things from what he was doing in OTAs.”

The complete developmental process for O’Neill is going to take time, but the steps forward are encouraging as the Vikings search for potential depth options on the offensive line.

Thielen on the defensive backs
The Vikings have one of the deepest cornerback groups in recent memory. The selection of first-round pick Mike Hughes has only elevated the talent in the positon group.  Wide receiver Adam Thielen has noticed the quality of competition as he lines up against them every day in practice.

“Our corner depth is unbelievable right now,” Thielen said. “You look at our outside guys, the guys in the slot, you’re going to get a good corner no matter where you’re lined up. I love that, I know our receivers love that. When you go to a game, it makes you play a little freer”

This is high praise from Thielen, who is quietly considered one of the top route-running wide receivers in the league. Not only is he noticing the defensive talent, but the top wide receiver is paying attention to the processing speed of his new quarterback, Kirk Cousins.

“From my perspective, I guess it would probably just be the fact that he can make all the throws and then he is a smart enough guy to know where to go with certain coverages, certain situations,” Thielen said. “When he needs to check the ball down, when he needs to take a shot. That stuff sometimes goes unseen.”